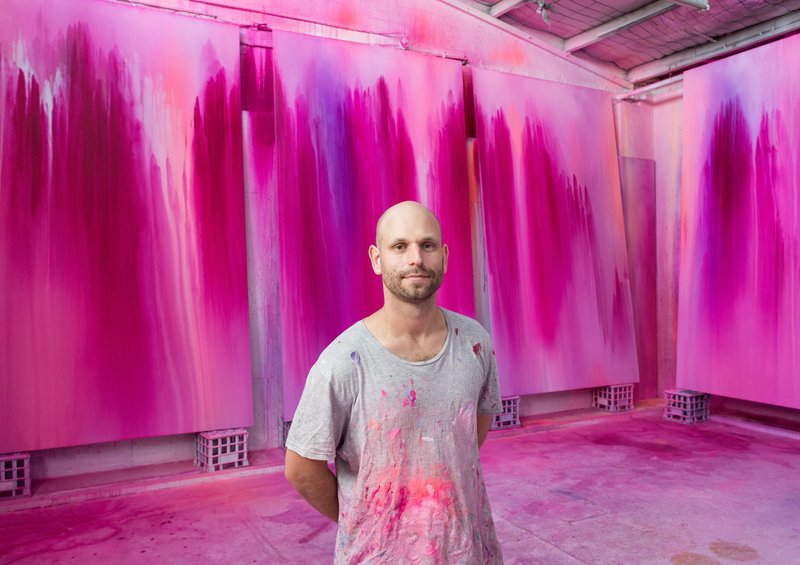 Melbourne artist Ash Keating, works within an expanded contemporary field, through painting, performance, sculpture, video and intervention. Keating’s practice is currently about the performance and process of painting, the remaining piece a document of the performance.

Keating has exhibited extensively in galleries and site-responsive art projects in Australia and internationally since 2004. He has undertaken numerous large-scale painting commissions in public spaces for institutions and events such as Notel Hotel (2018),Splendour in the Grass (2018, 2016), Lorne Sculpture Biennale (2016), the Adelaide Festival Centre (2015), RMIT University (2014), and the National Gallery of Victoria (2013).

He is represented by Blackartprojects and is currently showing at Sydney Contemporary until 16 September 2018.

His practice has attracted significant attention in Australia, winning the Incinerator Art Prize (2015), Guirguis New Art Prize (2013), Substation Contemporary Art Prize (2012) and his works are held in many public and private collections including the NGV, NGA, MCA, AGNSW, MUMA and Artbank.

In this video Keating chats to NAVA about what art means to him and the challenge of balancing the full-time production of work with the administration required to maintain a professional practice.