Image: Esther Anatolitis at launch of the McKell Institute’s report Opportunities in Change: Responding to the Future of Work. Photograph by Anna Kučera, 2019. 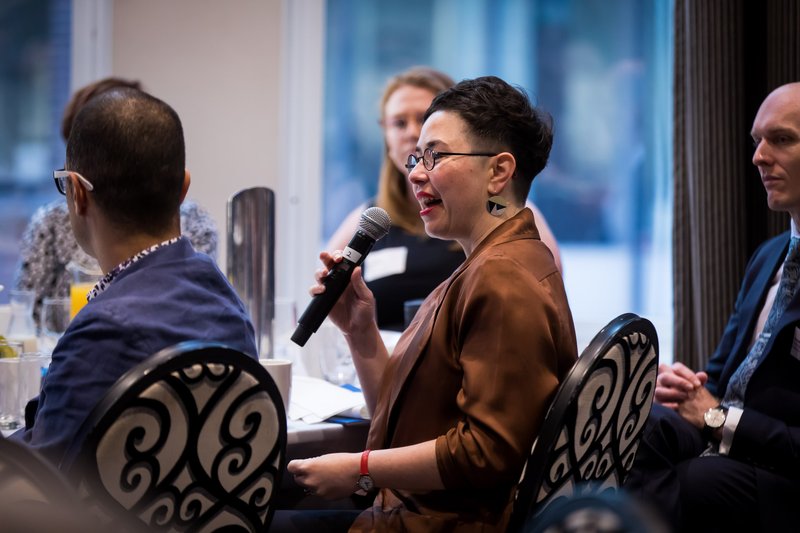 Queensland local government elections start the year off on 28 March, followed by NSW on 12 September, and then Victoria on 24 October. Both territories are going to the polls as well: NT on 22 August, and the ACT on 17 October. The Queensland state poll wraps up the election year on 31 October.

In the arts, what are the key issues and key questions to ask in preparing academic, journalistic and policy responses this election year?

The Queensland local government elections will be held on 28 March. Will the unknown Mackay councillor who leveraged George Christensen’s national profile to boost his own be successful – a boost that served as an attack on internationally renowned artist Abdul Abdullah, securing headlines all over Australia?

At the same time, the National General Assembly of Local Government is calling for motions that call on the Australian Government to take specific action. Councillors have until 27 March to propose a motion and there are detailed guidelines on the NGA’s policy priorities.

At the end of the month, some important news is due from the Australia Council on the future of Australia’s arts sector. The announcement of the successfully funded companies in their Four Year Funding for Organisations program is expected to be met with great concern for the future viability of the industry. The previous announcement resulted in significant changes to the arts ecology four years ago, resulting in company closures with a disproportionate impact across our states and territories. Successive neglect of Australia Council funding since Minister Brandis’s unexplained cuts risks contracting the very industry it’s there to nurture. Circle March 30 and 31 in your calendar and be sure to contact artists and organisations for comment. What’s their outlook for their own practice? What’s their view on the sustainability of the sector?

The 250th anniversary of James Cook’s voyage to Australia will be commemorated prominently in April, and by then there will hopefully be a better understanding of what Cook’s legacy truly is, having never circumnavigated Australia, instead attacking First Peoples within fifteen minutes of contact. It will be important for journalists and policy-makers to centre the voices and the stories of First Peoples during this difficult month. The way we tell our history matters.

The federal budget and budget response are important documents for understanding a government’s priorities. Reading the budget as a cultural text offers a rich range of responses. This chronology outlines NAVA’s past budget responses, as well as a précis of the arts sector’s responses to successive policy neglect. How will the Australian Government bridge its responsibilities to national cultural development following the summer devastation and redressing the climate emergency?

The National General Assembly of Local Government meets in Canberra on 14-17 June to set a national agenda for local issues. Their top priorities match those outlined in the CSIRO’s Australian National Outlook – with a strong focus on trust. The more that governments turn their backs on local culture, the less we trust them, and the more our social cohesion fractures. The Democracy 2025 project warns us that, by its near horizon year of 2025, “if nothing is done and current trends continue, fewer than 10 per cent of Australians will trust their politicians and political institutions — resulting in ineffective and illegitimate government, and declining social and economic wellbeing.”

Led by the Museum of Australian Democracy with research partners, Democracy 2025’s first report assesses dissatisfaction with democracy and analyses the outcomes by a range of demographic factors. It looks at trust in state or territory government, federal government, political parties, local government, government ministers, MPs in general, local councillors, public servants and your local MP. Across all age groups, trust in political parties is the lowest: 17.42% on average. Mercifully for local government, levels of political trust in them were highest across all age groups at 49.92% on average. Trust in local councillors themselves is much lower – 30.14%, a similar level to the 31.64% expressed for your local MP.

Arts Day on the Hill is NAVA’s annual focus on constructive arts advocacy, building long-term relationships for arts policy that survives a single election cycle, for the benefit of all Australians.

This year’s Arts Day on the Hill is Wednesday 12 August, the first sitting week after the winter break. Pop it in your calendar now and engage with the nation’s leading artistic thinkers and industry bodies on what’s needed in policy, advocacy and action for Australia’s arts.

Northern Territory local government elections will be held on 22 August, and NAVA looks forward to a strong focus on supporting Aboriginal Art Centres and well as strong advocacy against fake ‘Aboriginal-style’ art.

The NSW local government elections on 12 September will focus a great deal of arts advocacy, with many updated cultural plans to follow. Councils who have declared climate emergencies will be looking at actions that sustain local creative communities and local culture. This will be a pivotal time for local leadership on national issues.

ACT goes to the polls on 17 October, and while the nation’s flagship cultural institutions are based in Canberra, it’s the federal government that’s responsible for their flourishing. Issues local to the ACT include the challenges for local artists to sustain local careers without relocating. The legacy of Canberra Centenary did not grow the capacity of local sector organisations to develop local practice, and while philanthropists meet regularly to address gaps, ACT artists are the only artists in Australia who don’t have a local government structure to guide on policy and seek useful investment.

Victoria’s local government elections are on 24 October. Across Victoria’s regions, a strong focus on the visual arts, artists and galleries has resulted in many new gallery developments (with Shepparton a big focus), while in other areas concern is focused on appointments and role mergers that eliminate specialist gallery director roles. The richest owners of artworks across Australia are our local governments, who own and operate public galleries and their collections in regions and cities all over the country. Often, the value of those collections are one of the most significant assets on a local or state government balance sheet. According to federal government Cultural Funding data prepared annually for the Meeting of Cultural Ministers, in recent years local governments have been spending more on infrastructure and less on ongoing operations such as people and programs. Capital investment has been increasing and recurrent expenditure decreasing – both in dollar terms across all local governments aggregated, and also, as a proportion of local government cultural budgets.

Local governments, long the custodians of creative, innovative, resilient communities, are shifting their arts mindset towards the bricks and mortar that prop up their bottom line. Increasingly, we’re also seeing gallery director positions merged with performing arts centre directors or infrastructure management roles, robbing our regions of the expertise needed to identify and build local artistic talent. Perversely, such moves have the undermining consequence of robbing local government of the expertise required to build and sustain the collections that contribute great value to those bottom lines.

Latrobe Regional Gallery has long been a focus for this reason, and more recently the role has not been replaced. Recent leadership changes in the arts branch at the City of Melbourne should see a return to responsible arts and cultural strategy following the concerning approach that caused high staff turnover and significant artist and industry concern.

The Queensland state poll wraps up the election year on 31 October. NAVA will be following the implementation and new commitments for Creating Queensland’s Future, the state’s ten-year arts roadmap, as well as the successes and challenges of the Regional Arts Services Network, a new approach to regional arts development that involves both arts and non-arts organisations in a complex set of interdependencies. What’s next for Queensland’s artists?

The Mid-Year Economic and Fiscal Outlook, released late in the month, tends to contain those hidden surprises that make the Xmas period not quite the reinvigorating break it needs to be for Australia’s public servants to focus on the public good. Colleagues tell me that obscured somewhere in last year’s MYEFO is $4m that’s been committed to a party that former minister for the arts George Brandis is hosting in London this year for the arts community in his capacity as Australian High Commissioner to the UK. Have you been able to find it? Have you worked out where the money came from?

Portfolio Additional Estimates Statements can also be the bringers of unexpected news, such as 2017’s retrospectively applied efficiency dividend on the Australia Council. Far too often it's a forensic look that’s required to understand the government’s cultural policy positions, such as the $25m that was taken from the ABC to give to the Cook commemorations – on reflection, offering a very clear indicator of cultural policy priorities.

Throughout the year, we will look at specific case studies across the states and territories facing voters locally or at state level. A great many areas for further enquiry will arise as we connect research and practice to indicate constructive directions for policy.