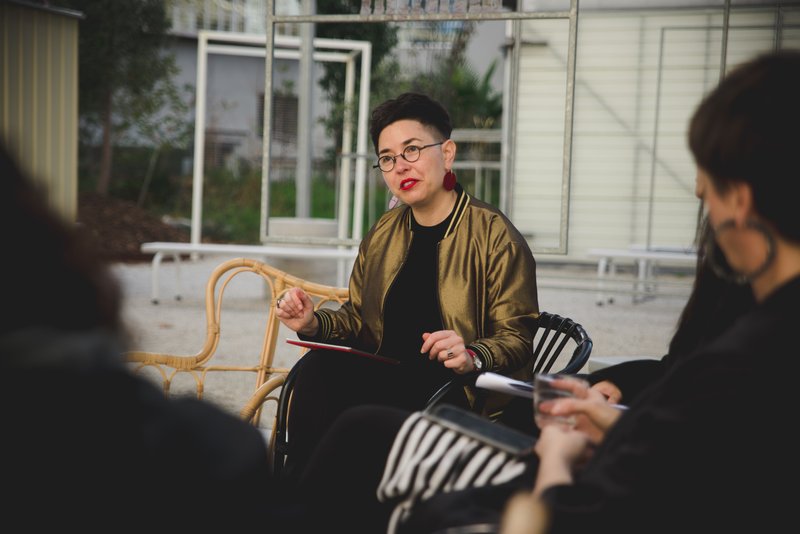 Professor of Fine Art, Kit Wise, Dean of the School of Art at RMIT University, today announces the appointment of Esther Anatolitis as Adjunct Associate Professor.

“While long a friend of the school, we are delighted that Esther is joining our community more formally,” said Professor Wise. “Her standing as a thinker, communicator and agent for change is second to none, resonating strongly with our work on how artistic practices intersect with issues of equity, access and democracy. We look forward to closer collaborations across our teaching, research and engagement agendas, in line with shared values around praxis, alternative ways of knowing and the role of art in global society.”

The RMIT School of Art is an international site for innovative and diverse art, craft and photographic practices and research. The School of Art is known for its diverse and internationally-renowned creative programs led by accomplished artists, photographers and professional staff who strive for excellence in pedagogy, research and innovation. RMIT is ranked number 1 in Australia and 11 in the world for Art and Design (2019 QS Rankings), placing the School of Art in the top echelon of the world’s art and photographic educational institutions.

Esther Anatolitis is Executive Director of the National Association for the Visual Arts. Esther fosters local, regional, national and international perspectives on contemporary arts issues as one of the nation’s leading advocates for the arts. Her practice rigorously integrates professional and artistic modes of working to create collaborations, projects and workplaces that promote a critical reflection on practice. With a strong background in visual arts, design, architecture and media, Esther has held leadership roles including Craft Victoria, Melbourne Fringe, SBS and Express Media, and most recently with Regional Arts Victoria. She is Deputy Chair of Contemporary Arts Precincts, who are about to open Collingwood Yards, and has served numerous board, policy, advisory and juror roles.

Esther is a graduate of UNSW and Stiftung Bauhaus Dessau, where in 2001-2002 she was the DAAD Künstlerprogramm resident. She has presented guest lectures at universities across Australia, has taught into the studio program at RMIT Architecture and served as guest critic and examiner there for over fifteen years, and has also taught at UNSW and the University of Sydney. Esther is a former curator of Architecture+Philosophy, Digital Publics and Independent Convergence. Recently Esther has presented at the conferences of the Australian Academy for the Humanities, the Art Association of Australia and New Zealand, and Monash University’s Creative and Cultural Industries symposia. In late 2019 at RMIT, Esther presented the keynote for the Australian Council of University Art and Design Schools conference, entitled “Engagement: What the artists and designers of the future need from all of us right now.”

“I’m truly delighted and honoured to be appointed to this role at RMIT, an institution whose people and ambitions I’ve long admired,” said Esther Anatolitis. “I look forward to exploring exciting new pedagogies, research and collaborations towards a contemporary arts sector that’s ambitious and fair.”