A Wajarri Yamatji woman from Western Australia, Nicole Monks is a transdisciplinary artist and designer of Aboriginal, Dutch and English heritage. 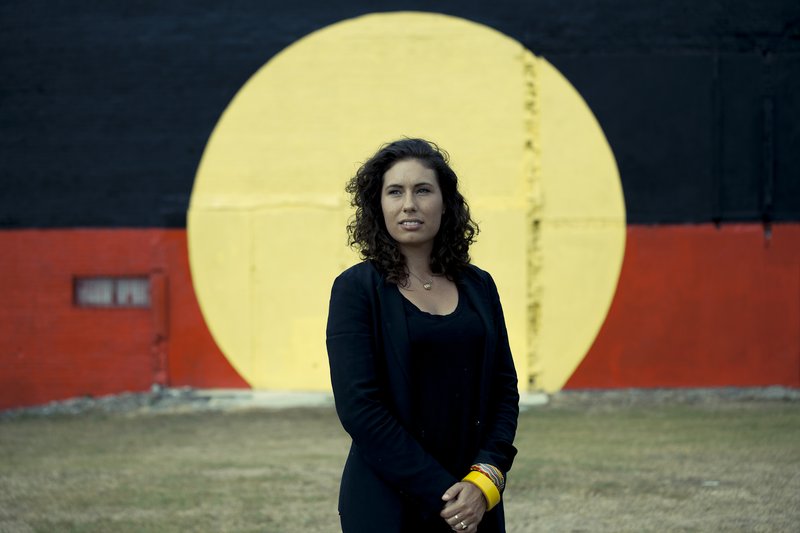 A Wajarri Yamatji woman from WA, Nicole Monks is a trans-disciplinary artist and designer of Aboriginal, Dutch and English heritage currently based in Sydney. Her practice is informed by her cross-cultural identity within the current epoch. Nicole focuses on the learned behaviours we attach to objects/places, in particular the similarities and differences between Western and Aboriginal culture, subversively allowing Australian culture to come into question.

Nicole began her career as a Designer with a scholarship from KVB College and has since restudied certificate 4 in Fine Arts at Great Lakes TAFE to develop a conceptual artistic practice, including new media, photography, installation and public art.

Renown as a solo and collaborative artist, Nicole founded the company ‘blackandwhite creative’, an initiative to generate cultural awareness by collaborating with Aboriginal and non Aboriginal individuals and organisations to weave Aboriginal philosophies of sustainability, innovation and collaboration into contemporary art and design projects.

Since 2011 Nicole has exhibited at Boomalli Aboriginal Art Co-operative with her first solo show in 2014. In 2012, she presented her first international exhibition at the Tokyo Metropolitan Art Museum and in 2014 at the Parliament of NSW Aboriginal Art Prize, won the UNSW Art & Design Residency and received Highly Commended. She collaborated on Marri Ngurang (large place), an installation in the entry foyer of Platform, an affordable housing block in Eveleigh, Sydney, commissioned by City West Housing to tell the traditional story of Gadigal Country. Nicole won the Fishers Ghost Photography Award in 2014 and a Sydney Design Award for her showcase at Australian Indigenous Fashion Week. The following year she opened fashion week with her collaborative label PANDANAH. In 2015, she received an Aboriginal Design grant from Arts NSW, won the Drift art installation award in Mandurah, WA and the Fishers Ghost Aboriginal Art Award. Recent shows include; White Noise (with Amala Groom), Underbelly Arts Festival, and solo exhibitions at the Perth Centre for Photography, and AD Space, UNSW Art & Design. This year she received an Indigenous Design Mentorship from Arts NSW through the Australian Design Centre, a NAVA Australian Artists' Grant, and won the Wandjuk Marika Memorial 3D Award, as part of the 33rd Telstra National Aboriginal & Torres Strait Islander Art Awards currently on show at the Museum and Art Gallery of the Northern Territory until 30th October 2016.

Nicole is currently designing two furniture ranges; Nyinajimanha (Sitting Together) and Wabarn-Wabarn (Bounce), based on Indigenous knowledge around concepts of sustainability, cultural sensitivity, form and function which will be launched at the Australian Design Centre later this year.

In this video, Nicole chats to NAVA about getting started as an artist and designer, the benefits of collaborating and her responsibility to telling the stories of her heritage through her work.