Benjamin Forster is a 'miscellaneous' artist who works primarily with programming and technology. 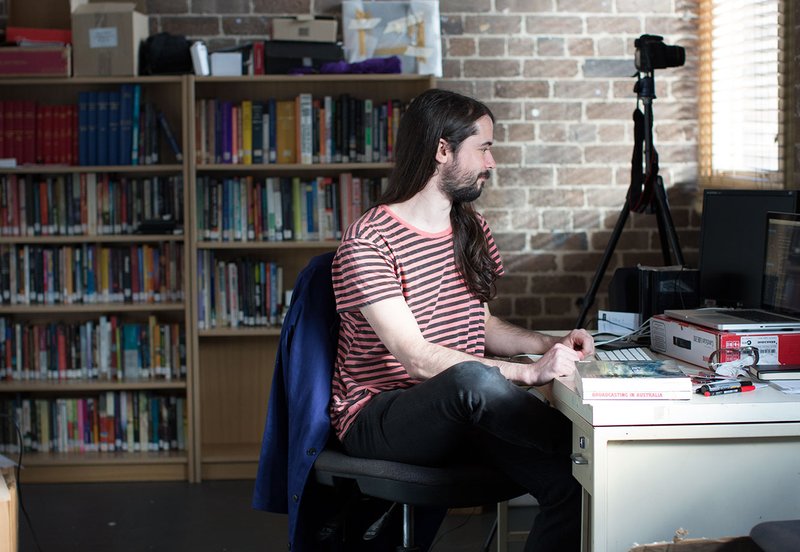 Full disclosure - Watching this video 11 months on, it is an interesting document of my very real concerns at that point in time. I had earned a total of $13,281 in the 15-16 financial year and was facing the reality that the conscious political decisions I had made around how I worked in the arts was unsustainable. Something had to shift. Now, as I write these words, and update my extended biography below, I am working full time as a programmer for a mortgage broking company, Loan Market. I am on a salary, receive superannuation, get paid on public holidays, and accrue annual leave. Something shifted. I currently am showing new work as part of Me Time at Canberra Contemporary Art Space and The Conversational Cosmos at West Space in Melbourne, but have had to make compromises around how I sustain myself and my work. The decision has been to actively deprofessionalise my artistic labour, supported by the explicit and complicit professionalisation of my labour outside of the arts.

Benjamin is a Jewish name meaning 'first son'. He is his mother’s first, his father’s second and the youngest until recently. Forster is his last name, but not really. It came from family friends, gifted when he was four after a pretty extreme event. Sometimes he considers changing it. It’s difficult though because it seems like proper nouns are a form of currency. This could all be in his head.

Either way this name of his received a Bachelor of Visual Arts with Honours from the Australian National University in 2008, and a Graduate Diploma in Information and Library Studies from Curtin University in 2015. It has also exhibited work nationally and international. Some of his personal highlight include Your time is not my time at De Appel Arts Centre in the Netherlands, Primavera 2012 at the Museum of Contemporary Art, Sydney, NEW13 at the Australian Centre for Contemporary Art, Melbourne, Technologism at Monash Museum of Art. My Brain Is In My Inkstand: Drawing as Thinking and Process at the Cranbrook Museum of Art in Michigan, The International Symposium on Computational Aesthetics 09 in Victoria, Canada, at Fremantle Arts Centre, Perth, at Firstdraft, Sydney, and recently had a tiny survey of work called A glossary of sorts at Success, Fremantle, 2016. In 2014 he co-edited Un Magazine with Robert Cook for a year, and in 2016 co-founded and is on the board of Frontyard Projects, a not only artist run space which was only ever really meant to exist for six-months.

For a while now he has refused to engage with art prizes or any form of awards. Put bluntly, he does not want to tacitly support ideas about art that such things promote, namely the neoliberal ideologies of individual self actualisation and competition. That said, he has done it in the past, winning the non-acquisitive award in the 2010 Fremantle Print Award, and both the Award for Excellence and Celebrating Joondalup Award in the 2012 Joondalup Invitation Art Award. Sadly none of these came with novelty sized checks, medallions or even trophies.

Over the past five years he has jumped around doing residencies at various organisations, including the Museum of Contemporary Art, Sydney, Canberra Contemporary Arts Space, Perth Institute of Contemporary Arts, Fremantle Arts Centre, The Centre for Interdisciplinary Art Perth, Firstdraft, SymbioticA: The Centre for Excellence in Biological Arts, The State Records Office of Western Australia, Helsinki International Artists Programme, and most recently Artspace One Year Studio Residency in 2016. He still struggles to define what a residency actually is to his mother. But definitions and their inadequacy is precisely what interests him, so that kind of makes sense.

He once kept track of all the publications, ephemera and junk that included this name of his, but at some point this started to feel silly. That was about the same time he stopped looking for approval in the words of others, and a taste for poetry and writing developed. Since then words have increasingly become more entrancing to him than pretty things for white walls. Definitions again, he guesses.

But seriously and beyond all words, he struggles, and some say thinks too much. At the end of each day he is mostly happy though. And yes this was all written by him, of course, speaking in the third, pretending and performing for you while trying to remain honest.

In this video, Benjamin chats to NAVA about the challenges of sustaining a life as an artist, commercialisation, and his thoughts on the limitations of language to explain or claim 'artistic practice'.

Above photo by Jessica Maurer, 2016 One Year Studio Artist Benjamin Forster in his Artspace studio.