Perth-born artist Mason Kimber is interested in the idea of ‘architectural memory’ and works with oil on canvas and traditional fresco techniques. 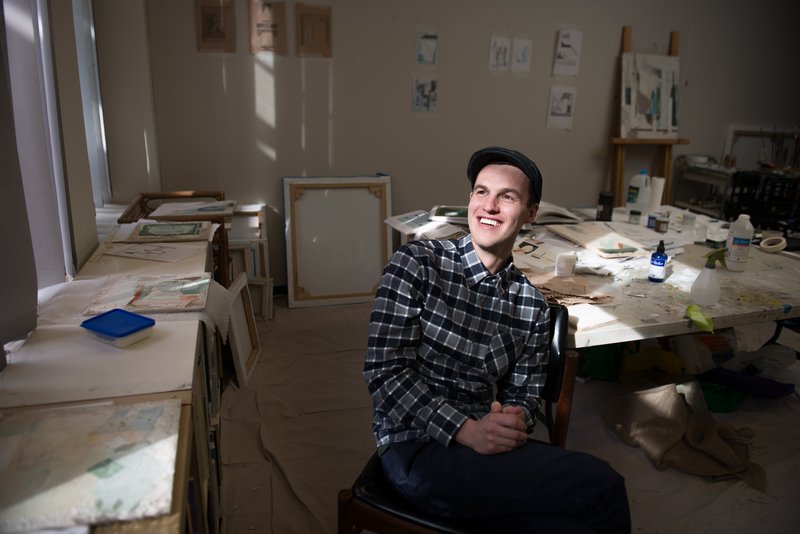 Mason Kimber uses painting, collage, fresco and wall-based installation to address an ambiguity between the abstracted space of painting, the fragmented nature of memory and the real or experienced architecture of the surrounding exhibition space. He has presented a number of commissioned large-scale painting environments that invoke interior architectures in two-dimensional planes of colour, most recently for NEW16, curated by Annika Kristensen, at the Australian Centre for Contemporary Art, Melbourne (2016).

Kimber completed a Master of Fine Art (Painting) from the National Art School, Sydney in 2013. The following year he was awarded the National Art School British School at Rome Residency in Italy, where he researched the spatial illusion found in fresco painting. In the same year he was a finalist in the Substation Contemporary Art Prize, the Brett Whiteley Travelling Art Scholarship, the Macquarie Group Emerging Artist Prize, and received an ArtStart Grant from the Australia Council. He was also awarded a 12-month studio residency at Parramatta Artists Studios. In 2015 Kimber was a finalist for the NSW Visual Arts Fellowship (Emerging) at Artspace, Sydney, and is currently one of seven artists recently awarded an Artspace One Year Studio for 2017.

Kimber’s work has been featured in publications including the Sydney Morning Herald, The Guardian, Art Collector Magazine and Art Guide Australia.

He is a NAVA Premium member and is represented by Galerie pompom, Sydney.

In this video, Kimber talks to NAVA about the impact his international residency in Italy has had on his practice.

Above: Mason Kimber in his studio at Parramatta Artists Studios, 2014. Photo Alex Wisser.