Renowned for her work using the humble felt-tip marker, TextaQueen explores politics of sexuality, gender, and race, examining how visual and popular culture inform personal identity and the influence of ethno-cultural and colonial legacies on these dynamics. 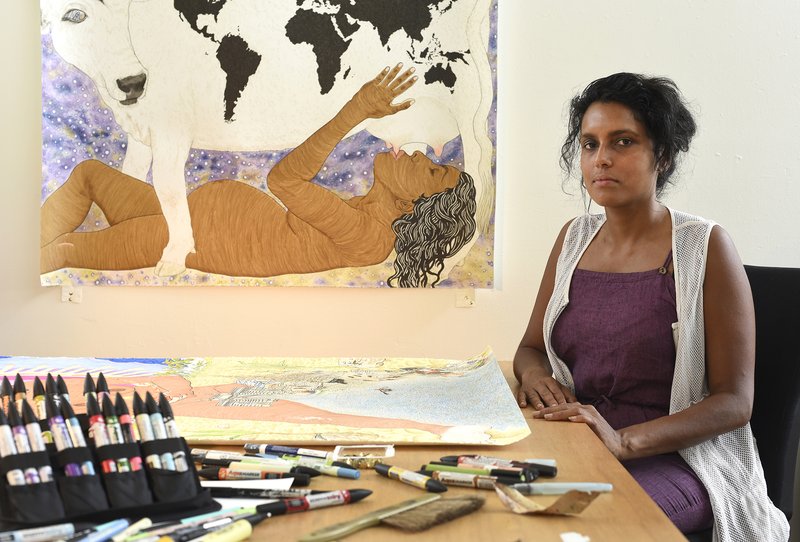 TextaQueen’s practice articulates delicate interplays between vulnerability and empowerment, intimacy and exhibitionism, and subjective and collective expressions of feminist, queer, and cultural identities.

Texta was born and raised in Perth and both her parents are from Goa, India. She completed a Bachelor of Fine Arts (BFA) at the University of Western Australia in 1995, and has exhibited nationally and internationally, with works held in important public collections including Art Gallery of Western Australia, Heide Museum of Modern Art, National Gallery of Victoria, National Portrait Gallery of Australia, Mornington Peninsula Regional Gallery, Monash University Museum of Art, Artbank and University of Queensland.

In February 2017, TextaQueen is presenting a solo exhibition of photography Eve of Incarnation at Blak Dot Gallery, and a nationally touring survey show, Between You and Me, will debut at Mornington Peninsular Regional Gallery, followed by a solo exhibition of works on paper, Gods Save the Queen at Sullivan + Strumpf opening in March.

TextaQueen is a NAVA Premium Plus member and represented by Sullivan + Strumpf.

In this video, Texta chats to NAVA about the impact that living and working overseas has had in further developing a language for processing a racialised identity in her practice.