Gordon Hookey was born in Cloncurry, Queensland and is a descendent of the Waanyi people. His politically charged work is instantly recognisable, using iconic symbols and bold comic-like characters in a vibrant palette of colours. 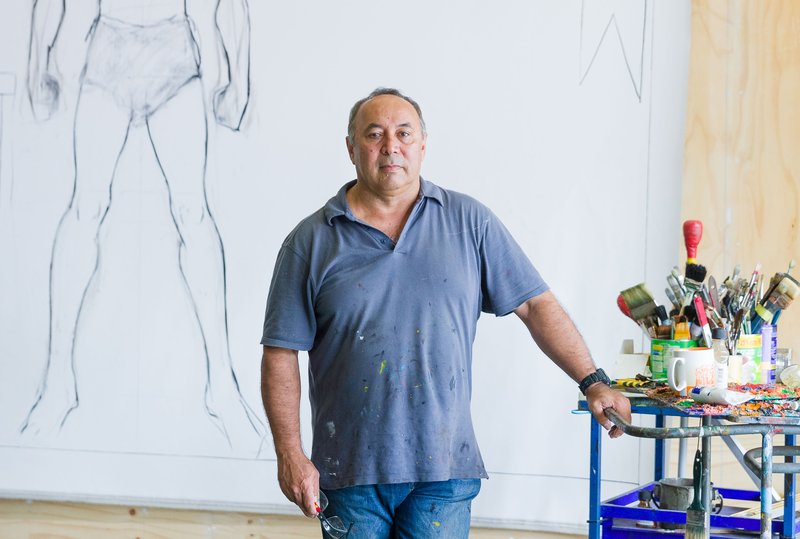 Gordon Hookey works primarily with painting, combining figurative characters, iconic symbols, bold comic-like text and a spectrum of vibrant colours to mock and critique racism. Through this idiosyncratic visual language he has developed a unique and immediately recognisable style. Hookey locates his art at the interface where Aboriginal and non-Aboriginal cultures converge. He explicitly attacks the establishment, implicating our current political representatives and other symbols of authority.

In April 2018, Hookey is showing as part of Handelsmerken (Trade Markings) at the Van Abbemuseum in the Netherlands. His 10-meter long canvas Murriland! (2015-ongoing) will be presented alongside the cycle of 102 paintings that inspired it - History of Zaire (1973-74) by Tshibumba Kanda Matulu. The enormous and ongoing painting of Murriland! was commissioned by Frontier Imaginaries together with Documenta 14, and was an audience favourite in Kassel in 2017.

Hookey completed a Bachelor of Fine Arts at UNSW Art & Design in 1992 and a Master of Visual Arts at Queensland College of Art, Griffith University, in 2012. He is an active member of the Boomalli Aboriginal Artists Cooperative and a core member of the Brisbane-based Indigenous collective proppaNOW, alongside artists including Richard Bell, Vernon Ah Kee, Jennifer Herd, Laurie Nilsen, Tony Albert and Megan Cope.

In this video, Hookey chats to NAVA about becoming an artist, the challenges of dedicating the time that a professional arts practice demands, and the rich experiences gained from arts residencies and travel both to widen one's world view and deepen a practice.