Katherine Hattam’s work encompasses themes of feminism, domesticity, time, autobiography and psychoanalysis. Her works combine a dual representation of the public and private spheres; they are locations for the intersection of memory, space and autobiography, littered with the objects and influences that have shaped her. 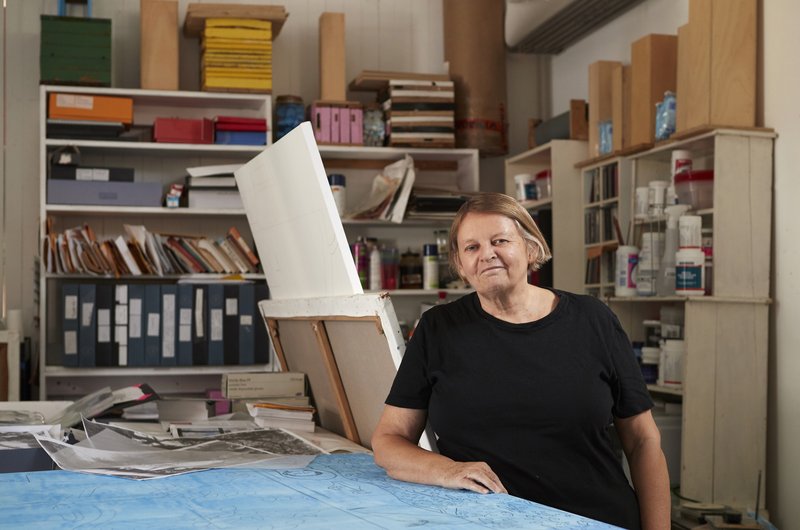 Katherine Hattam is a mixed media artist working across painting, drawing, collage, printmaking and sculpture centred on the dialects of domesticity, family and self. Recurring motifs like chairs, teapots, scissors, pegs and hairbrushes form an inventory of objects that represents a complex complex constellation of relationships in which the autobiographical mingles with the symbolic.

Hattam employs repetition as a tool for revelation, excavating the edifice of family, feminism, education, literature, psychoanalysis and the role of the unconscious in art making.

Hattam held her first exhibition in 1978 at the George Paton & Ewing Gallery, alongside Helen Frankenthaler and has exhibited regularly ever since. This year, she is showing at Arthouse Gallery, Sydney July to August, followed by a solo show at The Gallery at Bayside Arts & Cultural Centre, Melbourne in September. Recent exhibitions include Seeing Through (2017) at Daine Singer, Collective vision: 130 years (2017) at Bendigo Art Gallery, Desire First (2016) at Devonport Regional Gallery and (2015) at Deakin University,  A Billion Bucks(2016) at Honeymoon Suite, Sometimes (2015) at Daine Singer, Backwaters (2014) at LUMA, Consciousness Raising (2014) at Daine Singer, Inventory (2010) and Book Covers (2009) at John Buckley Gallery, Staying on Message (2008) at Australian Galleries, Landscape of Longing (2013) at Mornington Peninsula Regional Gallery, Under the Influence (2007) at Warrnambool Art Gallery, Innocent Works (2008) at Bendigo Art Gallery, and at the National Gallery of Victoria: This and Other Worlds: Contemporary Australian Drawing (2008), Stick It! Collage in Australian Art (2010) and The Naked Face: Self-portraits (2010-11).

Hattam has won the Banyule and Robert Jacks Drawing Prizes, has been short-listed many times in the Dobell Drawing Prize, the National Works on Paper Prize and Arthur Guy and Geelong Gallery Painting Prizes. She holds a BA in Literature and Politics from the University of Melbourne (1974), an MFA Painting from VCA (1992) and a PhD from Deakin University (2004). Hattam is represented by MUMA, Monash University.

In this video, Hattam chats to NAVA about becoming an artist, the challenges of balancing a full-time and absorbing practice with the commitments of family, and her worry that visual arts will be the last bastion for gender and age equity in Australia.