Shireen Taweel’s practice is rooted in cross-cultural discourse, where local-global dialogues influence her work through the refined processes of metallurgy. 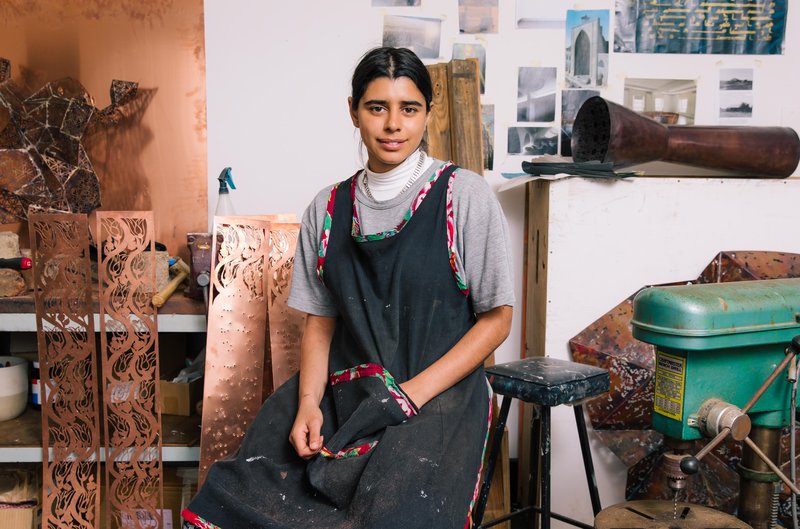 The work of Shireen Taweel sits in a space between jewellery, sculpture and architecture. Her techniques of making take the traditional art of copper-smithing into a contemporary context. Taweel draws on her cultural heritage within the Islamic Decorative Arts as a source of reference and inspiration in the development of forms and in the application of decorative techniques and consideration of sacred objects. Her geometric metal piercings indicate something distinct and inherent about cultural practices that are simultaneously reworked in new contexts. Through this shift in process, Taweel aims to reflect conversations around the sensitivities of the migrant experience of transience and how one may transform and make room for different practices simultaneous to echoes of tradition and heritage of origin.

Taweel is a current resident of Parramatta Artist Studios in Western Sydney and is also a Kickstart Helix Next Wave participant. Taweel is currently showing as part of The Inner Apartment curated by Nur Shkembi at Nishi Gallery, Canberra. Her solo show tracing transcendence part of Next Wave Festival opens May 4th at The Substation, Melbourne and is on until June 16th.

Early this year, Taweel was awarded the Arts and Culture Medal from Multicultural NSW; in 2017 received an Arts Project grant from the Australia Council for the Arts Grant; and in 2016 received a New South Wales Artists’ Grant through NAVA, and the Basil and Muriel Hooper Prize through the Art Gallery of New South Wales.