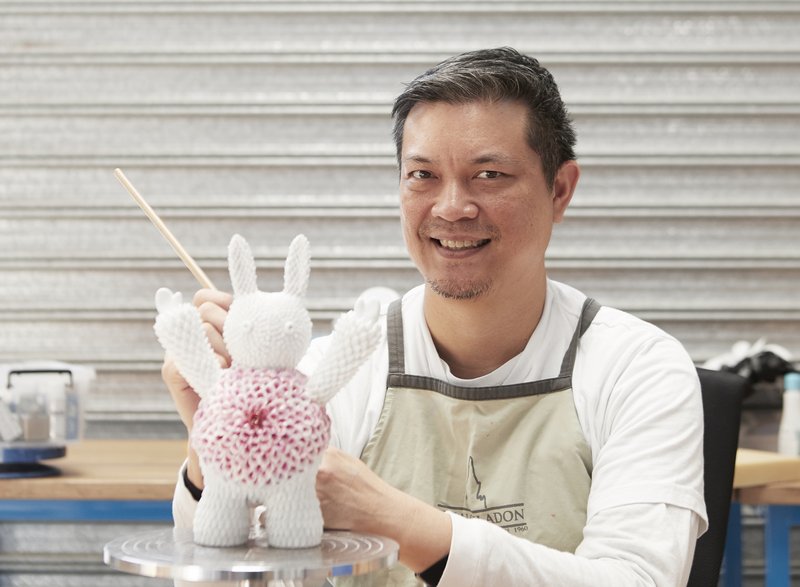 Vipoo Srivilasa's works explore similarities between the cultures of his native home, Thailand and his adoptive home, Australia. His work is a playful blend of historical figurative and decorative art practices with a healthy dose of contemporary culture.

Vipoo’s stunning creations often touch on political and social issues such as the environment, migration and Australian culture. His work draws on the traditions of fine Asian porcelain, with its use of cobalt blue and gold lustre, but each piece is entirely unique.

Vipoo was recently announced as the 2018 National Sports Museum (NSM) Basil Sellers Creative Arts Fellowship recipient. As part of this program, he is running public workshops where participants will be encouraged to imagine a trophy that they would like to give their sporting fans or heroes, 9 - 13 April 2018 at the NSM.

Vipoo’s solo exhibition Everyday Shrines recently opened at the newly refurbished Gippsland Art Gallery and runs until 17 June. In 2017 he represented Australia in the Gyeonggi International Ceramic Biennale in Korea; won the 44th Muswellbrook Art Prize (Ceramics), and received a general skills and arts development grant from the Australian Council for the Arts to work with Sakarin Krue-On, a multi-disciplinary Thai artist, and Marije Vogelzang, the world's first eating designer from the Netherland, in order to develop and create new interactive ceramic work for an exhibition at Edwina Corlette Gallery in 2019 and the S.A.C. Subhashok The Arts Centre in Bangkok.

Vipoo was awarded a Bachelor of Art (Ceramics) from Rangsit University, Bangkok, Thailand in 1994 which he followed with a Graduate Diploma of Arts (Ceramics) three years later at Monash University in Melbourne, and in 2014 was awarded a Master of Fine Art and Design from the University of Tasmania, Hobart.

In this video, Vipoo talks to NAVA about his practice, making people happy, and struggling with book-keeping.