Nasim Nasr interrogates the different ways women can be invisible in plain sight across both Western and Eastern cultures. 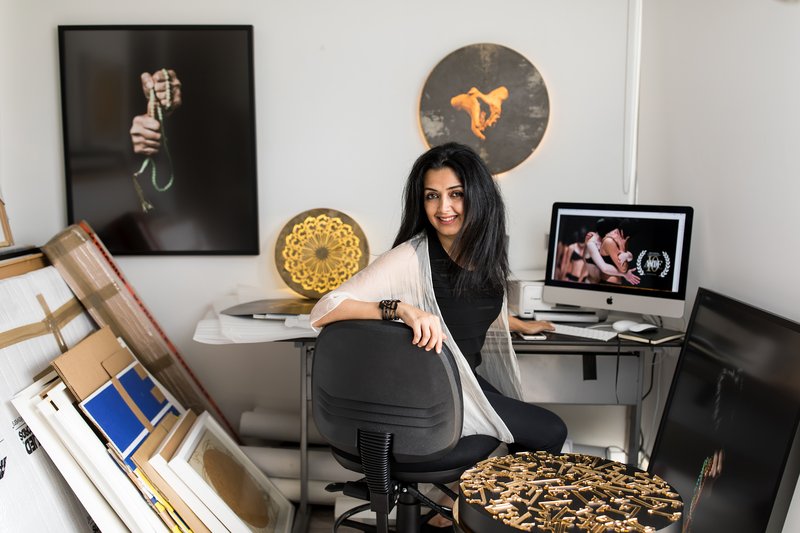 Nasim Nasr works across multiple channel video, photography, performance, installation, 3D objects and sound. Since relocating to Australia from Iran in 2009, her work has highlighted the complexities within contemporary notions of interchangeable identities and cultural difference. In considering the inherent contradictions and ambiguities within how objects and actions have sustained different meanings, and how multiple interpretations impact upon contemporary perspectives, her practice seeks to establish a symmetry or counterbalance of cultural and intellectual separation between West and East.

Most recently Nasr’s Women in Shadow II was presented at the 10th Anniversary Edition of A Shaded View on Fashion Film (ASVOFF) at the Club De L’Etoile in Paris, and was awarded Winner for best editing. This was the filmic version of Nasr’s performance work, Women in Shadow II shown at the Powerhouse Museum in Sydney in April 2018.

Nasr has been invited to be one of the participating artists in the New York Triennial of Asia at the Asia Society Museum, New York, in 2020. The inaugural edition, entitled We Do Not Dream Alone, will be co-curated by Michelle Yun, Senior Curator of Modern and Contemporary Art, and Boon Hui Tan, Vice President for Global Arts & Cultural Programs and Director of Asia Society Museum.

Nasr has been a finalist in the William and Winifred Bowness Photography Art Prize (2018, 2017), the Fisher’s Ghost Art Award (2018), the Sovereign Asian Art Prize (2017, Hong Kong), The Blake Prize (2018, 2016), and the Redlands Art Prize (2015). Her inclusion in curated group exhibitions has included Under the Sun: Reimaging Max Dupain’s The Sunbaker, Sixth Sense curated by Djon Mundine at the National Art School Gallery in Sydney, CASCA Contemporary 2015 in Adelaide, and the Tarrawarra Biennial: Whisper in My Mask, Melbourne 2014.

Her performance and video practice has been written about in major academic publications, by Anne Marsh — Video Void, Melbourne: Australian Scholarly Publishing, and Performance_Ritual_Document, Melbourne: Macmillan Art Publishing, both 2014, and the recently published Art and the Islamic Female Diaspora, Adam Geczy, Bloomsbury Publishing 2019. Nasr’s work has been collected by Parliament House Art Collection, Canberra; Gene and Brian Sherman Collection, Sydney; Artbank, Sydney and numerous private collections throughout Australia, and internationally in Germany, the USA, Singapore, Qatar and the UAE.

Nasr graduated with a Masters Visual Arts from the University of South Australia in 2011, and a Bachelor of Arts, Graphic Design, from the Tehran University of Art, Iran in 2008.

In this video, Nasr chats to NAVA about her work and practice, the experienced challenges of being a female artist trying to fit in.

This Artist File was supported by the NSW Government through Create NSW.