Nephi Denham is a Girramay Traditional Owner of the North Murray area in Queensland, who works in ceramics and sculpture. 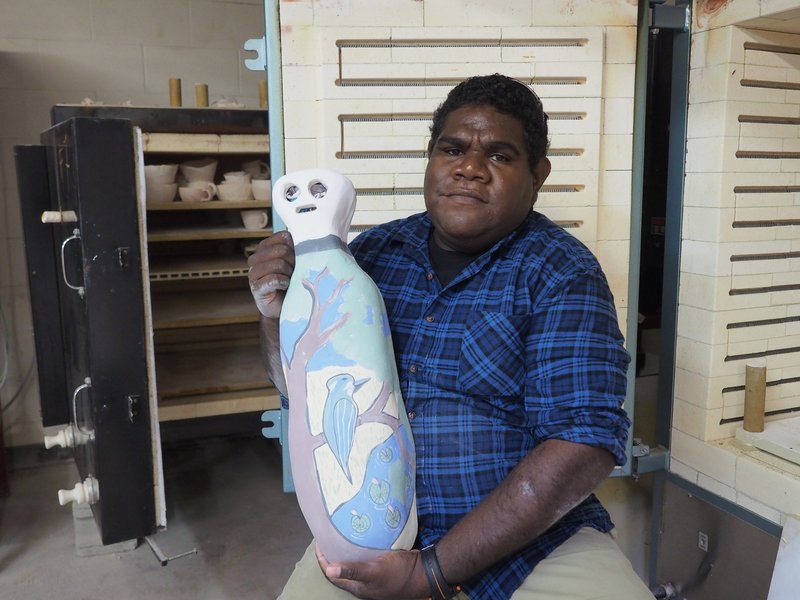 Nephi Denham is an artist working at the Girringun Aboriginal Art Centre, based in Cardwell, Far North Queensland. He is a speaker of language and currently lives at Jumbun, north-west of Cardwell.

Nephi’s practice is based in ceramics, sculpture and printmaking and reflects his Aboriginal heritage, traditional stories and the environment in which he lives.

He is currently showing as part of Clay Stories at Coffs Harbour Regional Gallery until 13 July 2019. Clay Stories is a significant survey exhibition of contemporary artworks in ceramics created by established and emerging Indigenous artists in remote parts of regional Australia. The exhibition presents pieces that are both sculptural and vessel-based, with each body of work a strong medium for storytelling, representative of the artists' connection to Country. This touring exhibition is an independent curatorial project developed by Sabbia Gallery, its exhibition curator Anna Grigson, five Indigenous art centres and the Remote Communities Ceramic Network. Clay Stories finishes its tour at the Mornington Peninsula Gallery in Victoria running from August to October 2019.

Nephi is also part of Manggan - gather, gathers, gathering which is a travelling exhibition in partnership between Girringun Aboriginal Art Centre, the South Australian Museum and toured by Museums & Galleries Queensland. This exhibition will be next on show at Bunjilaka, Melbourne Museum, Vic from 16 August 2019 to 26 January 2020.

Last year, Nephi was one of nine Girringun artists to complete an extraordinary outdoor installation of five sculptural Bagu, as part of a commission from the Cairns Performing Art Centre and was shown among a major installation of over 50 Bagu artworks installed at Sydney Contemporary.

In 2017, Nephi completed a ceramics residency at JamFactory in Adelaide during the Tarnanthi: Festival of Contemporary Aboriginal and Torres Strait Islander Art and supported by the Remote Communities Ceramic Network. He was one of four emerging artists across Australia (Ernabella, Hermannsberg and Erub) selected to take part in this program.

Nephi's work is included in the collections of the National Gallery of Australia and Queensland Art Gallery of Modern Art.

In this video, Nephi talks to NAVA about working and learning at Girringun Aboriginal Art Centre, and undertaking a residency at JamFactory in South Australia.