r e a  is an artist, curator, activist, academic, cultural educator and creative thinker whose work draws on a legacy of lived experience and the impact of intergenerational trauma, grief and loss. 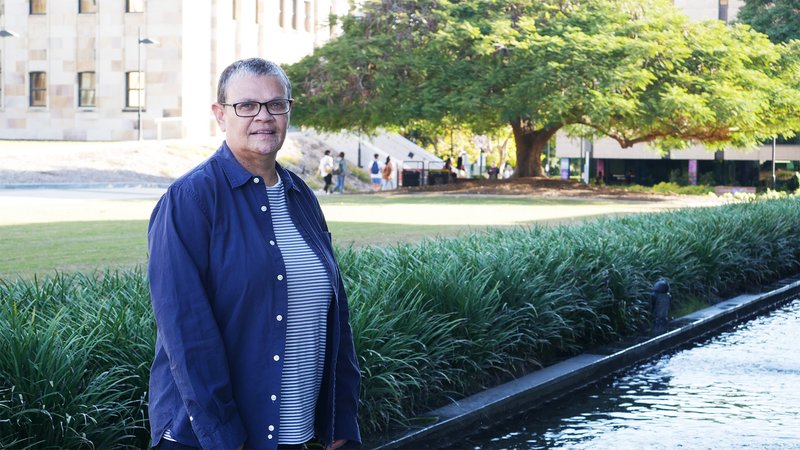 Dr r e a* is a descendant from the Gamilaraay/Wailwan people from the Central West NSW and Biripi people form the mid-North Coast of NSW.

Her ongoing practice-led research takes its development from new and critical discourses exploring intersectionality and positionality, through the cultural convergence of Aboriginality; within the creative arts and technology, history and colonialism, the body and identity, gender and queer politics.

r e a has recently completed a doctorate in Visual Anthropology at UNSW Art & Design and is a lecturer in the Aboriginal and Torres Strait Islander Unit at the University of Queensland. She initially studied Electrical Trades at Petersham TAFE, Sydney in 1989, and then completed a Visual Arts Diploma at the EORA Centre at Petersham TAFE in 1990, followed by a Bachelor of Fine Arts (Visual Arts) at the College of Fine Arts, University of New South Wales in 1993. In subsequent years, r e a completed a Masters of Visual Arts at the Australian National University, Canberra, and a Masters of Science, Digital Imaging and Design (CADA) at New York University.

r e a is involved in ongoing collaborative research projects led by Jennifer Biddle including Sensory Entanglements: New Cross Cultural and Cross-Disciplinary Directions in the Creation and Evaluation of Multi-Sensorial Experience - an innovative research-creation program which designs and evaluates artistic objects and installations that engages with all of the human senses from an inter-cultural perspective, supported by a Canadian SSHRC (Social Sciences and Humanities Research Council) grant, and UNSW ARC Discovery Project, Cultural Sensorium: An Indigenous Ethnography of the Senses.

r e a has received numerous scholarships and grants throughout her creative and academic career, including a Samstag International Visual Arts Scholarship, New Media Arts Fellowship from the Australia Council for the Arts, and a Fulbright Scholarship.

In this video, r e a talks to NAVA about getting started as an artist, finding a way with photography and digital processes, and the impact of Marcia Langton's book Well, I Heard it on the Radio and I Saw it on the Television.

*r e a, is the artist's professional name, which is written in all lowercase with a space between each letter.