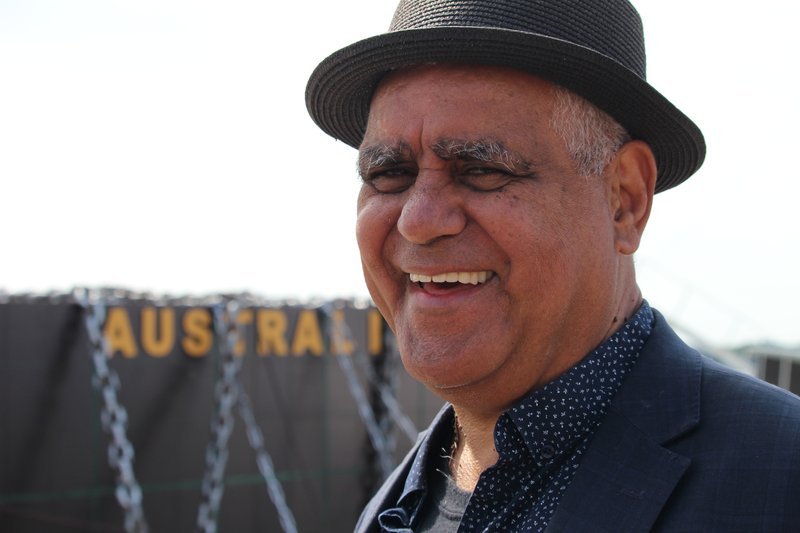 Born in Charleville, Queensland and based in Brisbane, Richard Bell is a Kamilaroi, Kooma, Jiman and Gurang Gurang activist and artist who works across painting, installation performance, text and video. One of Australia’s most significant artists, Bell’s work challenges the colonial mindset and preconceived notions of Indigenous art production.

Bell is showing in Welcome to Colour Television at QAGOMA which opens on 7 August 2020, and in September will be presenting a suite of major new paintings at Milani Gallery, Brisbane. Next year, he is part of OCCURRENT AFFAIR: proppaNOW 13 February - 19 June 2021 at the University of Queensland Art Museum, curated by Amanda Hayman and Troy Casey of Blaklash Projects.

In 2019, Bell presented No tin shack at the Venice Biennale. The work was a sculptural replica of Australia’s official Biennale pavilion wrapped in chains and driven around the canal city on a motorised barge. While initially staged as an intervention, it was exhibited at the Giardini Della Marinaressa as part of PERSONAL STRUCTURES - Identities, hosted by the European Cultural Centre. The work aimed to provoke conversations in Embassy2019, an installation he and his team also set up in Venice, in the gardens near the Giardini.

Bell's work Embassy (2013-ongoing) was shortlisted for the 2019 Visible Award. He was announced as the winner of Rockhampton Art Gallery's The Gold Award for 2018 and selected for the 2018 Redlands Konica Minolta Art Prize.

He is a founding member of proppaNOW and is represented by Milani Gallery, Brisbane, Australia.

In this video, Richard Bell repositions the artist at the top of the political power hierarchy, and reflects on the impact of his own work over several decades.