Blak Douglas is a multi-award winning Koori artist, descending from the Dhungatti peoples of the NSW Mid-North Coast, and currently based in Redfern NSW. 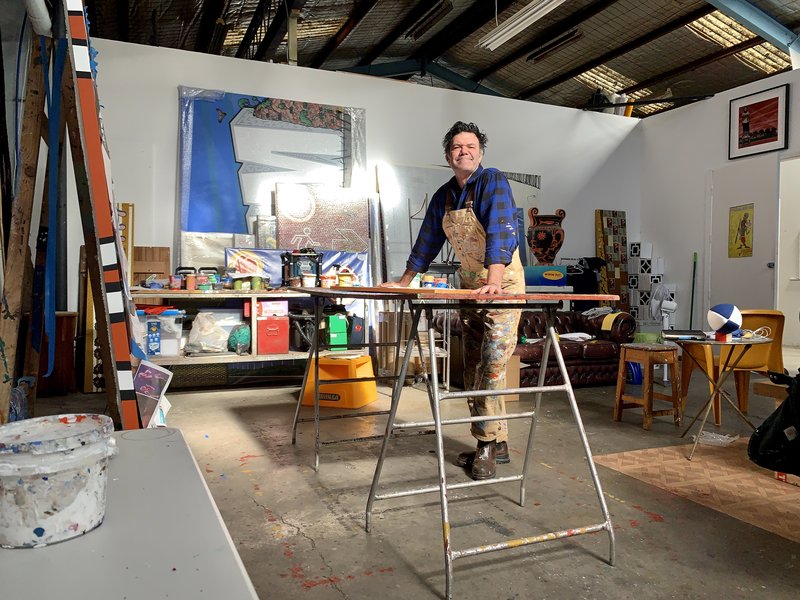 Blak Douglas is a multi-award winning Koori artist, descending from the Dhungatti peoples of the NSW Mid-North Coast, and currently based in Redfern NSW. Though he is originally trained in illustration and photography, for over 20 years Blak Douglas has developed a robust practice that spans painting, installation, murals and other public artworks.

His culturally and politically charged works often express a wry humour, condemning and satirising the injustices of colonial ‘Australia’. The social justice values that underpin his paintings work in tandem with his upfront visual style informed by graphic design.

Blak Douglas is the 2020 winner of the Museum & Galleries Award for ‘Three Views’ at Mosman Art Gallery, and is also the winner of the 2019 Kilgour Prize for his portrait of actress and singer Ursula Yovich. He has been a finalist in numerous major prizes including the Archibald Prize, Korean Australian Art Foundation Prize, Blacktown Art Prize, Fishers Ghost Art Award, Mosman Art Prize, King & Wood Mallesons Contemporary ATSI Art Prize and The Blake Prize.

In addition to his visual arts practice, Blak Douglas is also a classically trained Yidaki player who has accompanied the likes of Christine Anu, Jessica Mauboy, and Peter Sculthorpe.

In the near future, Blak Douglas will be launching a new locally based art prize titled 'Blak & Blu',  an annual ink on paper award with a focus on social issues.

In this video, Blak Douglas discusses the need for a grassroots level shift in funding opportunities and the joy of being included in school curriculums.