Kalanjay Dhir is an artist and musician whose work draws on popular culture, sci-fi and spiritual texts. He is based in Western Sydney on Dharug Land. 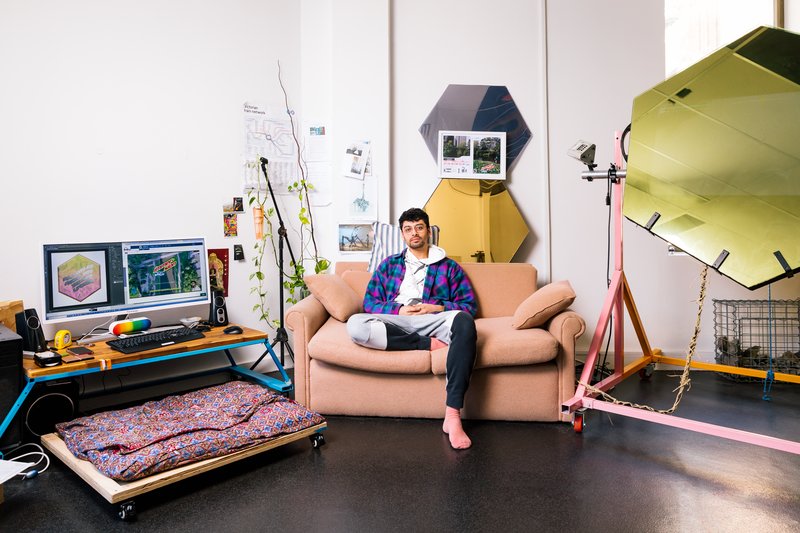 Kalanjay Dhir is an artist and musician based in Western Sydney on Dharug Land. His work draws on popular culture, sci-fi and spiritual texts. Kalanjay is interested in exploring mythological and speculative technologies through sculpture, video and internet objects. He enjoys thinking about what the world could look like if it were built with devotion.

From 2017 to 2020 Kalanjay worked at Parramatta Artists Studios and in 2019 this led to co-founding Pari, an artist-run space in Western Sydney, alongside local peers. He has presented solo exhibitions at Firstdraft, Peacock Gallery and Wentworth Point Community Centre and Library. In 2020, Dhir presented works at Next Wave Festival (online) and was the recipient of the Fauvette Loureiro Emerging Scholarship. Kalanjay holds a Bachelor of Visual Arts (Honours) from Sydney College of the Arts, University of Sydney.

In 2021, Kalanjay is developing video works commissioned by Fairfield City Museum and Gallery, the Sydney Opera House, ACMI and The Shed. These works depart from his sculpture-oriented practice and references narratives within games, computer-generated imagery, music videos, Shonen Manga and mythology.

In addition to his visual arts practice, Kalanjay has performed across Australia including Golden Plains 2020 and Soft  Centre 2018. Alongside Kilimi, he hosts Wednesday Sunset on FBi Radio as ‘2K’ spotlighting emerging acts from West and South West Sydney.

In this video, Kalanjay chats to NAVA about the importance of talking about your art-making process to different audiences and argues for pushing past representation as a marker of progress in the arts.