A one-day symposium on the future of Australian culture participants, presented by NAVA and Monash University Masters of Cultural & Creative Industries. 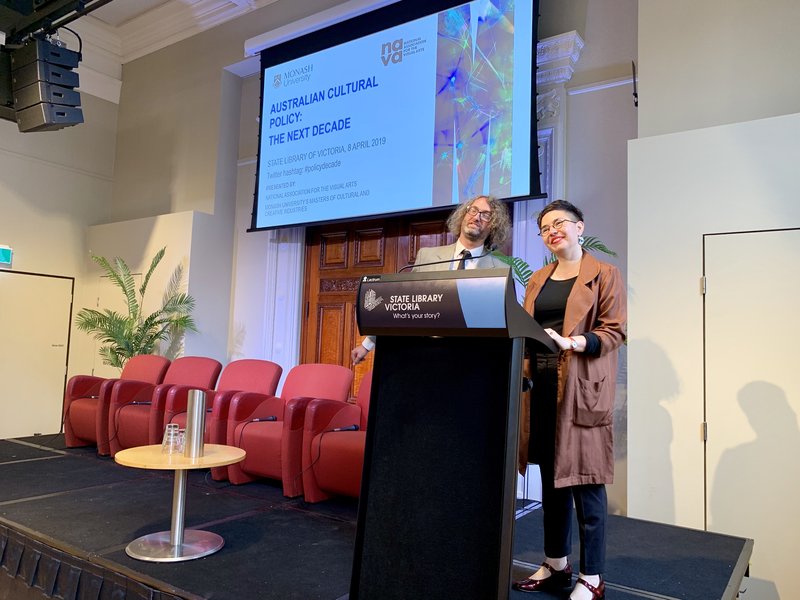 Australia’s cultural and creative industries are a $111 billion sector and employ 399,000 workers nationally. Cultural symbols lie at the heart of what it means to be Australian.

Yet the Commonwealth government has no formal national policy for this sector.

Monash University’s Masters of Cultural and Creative Industries and the National Association for the Visual Arts invite you to a one-day symposium to discuss the future of Australian cultural policy.

What are the pressing challenges facing the sector? What are the opportunities? And how could policymakers address them?

The symposium brings together leaders from the cultural industries, federal politics, higher education and the arts for a one-day discussion charting a road map for the next term of government.

Esther Anatolitis is Executive Director of the National Association for the Visual Arts. Esther fosters local, regional, national and international perspectives on contemporary arts issues as one of the nation’s leading advocates for the arts. Her practice rigorously integrates professional and artistic modes of working to create collaborations, projects and workplaces that promote a critical reflection on practice. With a strong background in visual arts, design, architecture and media, Esther has held leadership roles including Craft Victoria, Melbourne Fringe, SBS and Express Media, and most recently with Regional Arts Victoria. She is Deputy Chair of Contemporary Arts Precincts and has served numerous board, policy, advisory and juror roles. Esther is a former curator of Architecture+Philosophy, Digital Publics and Independent Convergence, and has taught into the studio program at RMIT Architecture, as well as at UNSW and the University of Sydney. A writer and critic, Esther’s work is regularly published and collected at estheranatolitis.net

Dr Ben Eltham is a Lecturer in Media and Communications at Monash University’s School of Media, Film and Journalism. Ben is a passionate teacher who leads several of the core subjects in Monash's innovative Masters of Cultural and Creative Industries. Ben’s primary research interest is the public policy of culture in Australia, particularly at federal level. He has published peer-reviewed journal articles, conference presentations, creative works, and edited book chapters. His monograph, When the Goal Posts Move: Patronage, power and resistance in Australian cultural policy 2013-2016 was published by Currency House in 2016. Ben also works extensively in the popular media as a journalist and essayist. Ben has covered federal politics for a decade as the National Affairs Correspondent at New Matilda, and he is a regular contributor to journals such as Crikey, Guardian Australia, Overland, Meanjin and the Sydney Review of Books. He is also sought out as a cultural policy consultant by federal, state and local policymakers, penning reports for the federal Department of Industry, Creative Victoria and the City of Sydney.

This project has been assisted by the Visual Arts and Craft Strategy, an initiative of the Australian, state and territory governments.

NAVA acknowledges the traditional owners and custodians of the land where this event is taking place, the Boon Wurrung and Woiwurrung (Wurundjeri) peoples of the Kulin Nation and others who traded on, travelled through and connected with this land, and continue to do so. We recognise all Custodians of Country throughout all lands, waters and territories. We pay our respects to the Elders past, present and emerging. Sovereignty was never ceded.