Dr Biljana Jancic distills the core themes and discussions of the second day of the Future/Forward summit, highlighting the underlying theme of artist as agent. 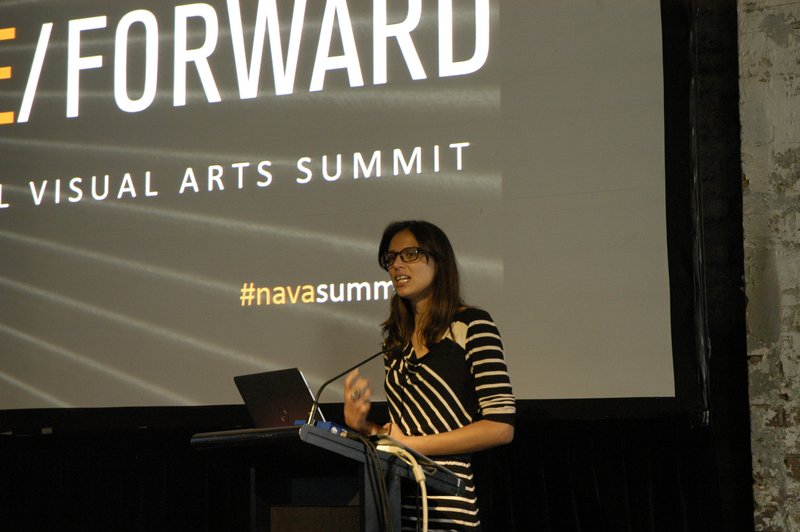 Day Two of the NAVA Summit revolved around discussions of advocacy and the relationship between cultural organisations and artists. The core themes of the day related to the ways in which the institution of art is adapting to changing cultural paradigms. Speakers variously considered the role that the advocacy of organisations and artists can play in shaping the agency of art in society.

The agenda for the day was set by Dr Hong-Hee Kim's keynote lecture in which she addressed the need for the contemporary art museum to be driven by a desire for conceptual elasticity and multi-directional communication between curators, artists and audiences. In her role as director of the Seoul Museum of Art (SeMA), Dr Kim has put into practice her vision that she describes as the 'post-museum'. This idea is transforming SeMA into a responsive system that is able to accommodate emergent artistic practices and respond to the needs of the local context, while simultaneously remaining open and dialogical in its interaction with international art.

The second day of the conference was particularly successful in framing key tensions currently influencing developments in visual art. Considered were the ways in which the fields of criticism and marketing are shaping the operations of contemporary artists and what big ideas are needed to make the field of visual arts more responsive to the changing needs of artists and audiences. Speakers throughout the day proposed ways in which artists and arts organisations can actively work towards creating ecologies that will allow for this field to thrive. The overwhelming desire was for future art institutions to be based on porousness, elasticity and ethics. This might result in a transparent institution that is genuinely open and responsive to the role of facilitating the interfaces between artists and audiences. Or, it may take the form of institutions taking a leadership role in setting agendas that address existing cultural inequalities in the representation and interpretation of artistic content.

Responses throughout the day emphasised the role that art institutions play in fostering communities and creating conditions in which artistic ideas can develop. Alongside organisations, it was suggested that artists also have a part to play in setting standards and using their agency to shape the future of art. Some years ago, US artist Andrea Fraser remarked that for artists:

Although art organisations have the power to frame and shape the visibility of ideas, Fraser's comments are particularly important here because they underscore a key point that the way in which artists make art and the way they negotiate the politics of the production and presentation is important in shaping the future of art. The second day of the Summit invited responses from a range of artists including Dr Alex Gawronski, Kelli McCluskey, Vernon Ah Kee and Dr Julia Gough, who all foregrounded the agency of artists and their practices in shaping the economic and social factors that mediate relations between key contributors in the field of art. The agency of artists can be reinforced by a criticality towards the generic hallmarks of individual 'success' and a focused aspiration instead towards a depth of engagement.

The field of art has the potential to become more diverse, vibrant and culturally responsive if there is a shift in attitudes away from individual self-interest and towards the building of broader sustainable ecologies for art. On an institutional level, calls for investments into this ecology included Professor Julianne Schultz's recommendation for a more cooperative approach to arts advocacy among arts organisations and a qualitative analysis of the arts in the form of a cultural impact statement.

As a gathering, those at the Summit appeared to share a common understanding concerning the value of art. The presentations over both days were often underscored by a shared belief that the power of art exists beyond key performance indicators, established merit criteria and cultural use value that is imposed on art from agencies that attempt to instrumentalise its complexity and core value as a mode of thinking. The presentations frequently cited the idea that, at best, art should seek to problematise culture rather than be used as a tool to propagate the existing status quo. The challenge for art organisations is to find effective ways of working towards giving art freedom beyond its instrumental value.

In this context, Professor Ghassan Hage offered a vision of art as a system of thought that allows for a vacillation between identities. The contemporary self is one based on layers of often conflicting histories and cultural modalities. In approaching this inherent complexity, art is valuable precisely because it allows us a language through which to approach the difficult, inaccessible and unquantifiable aspects of experience. Visual art enables us both to reflect the world and to offer visions of a world to come.

Dr Biljana Jancic is a Sydney based artist and writer.