Hannah Mathews provides a summary of the points raised and key observations of the first day of the Future/Forward summit. 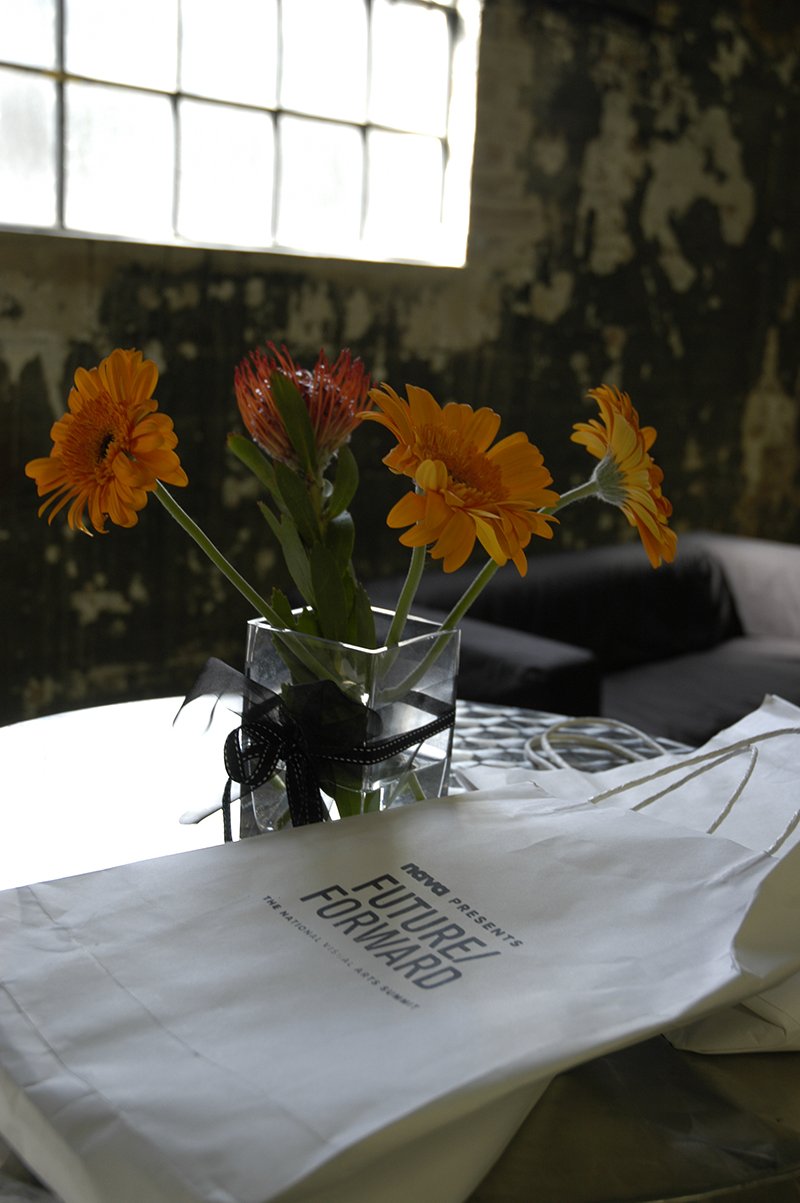 NAVA's inaugural National Visual Arts Summit – Future/Forward – was opened by Chairperson, Barry Keldoulis, at Carriageworks on Thursday 6 November 2014. The two-day event was introduced as an opportunity for the presentation of big ideas, inspiring challenges and discussion.

A mixture of artists, arts workers, funding body representatives and cultural commentators from various generations and regions made up the audience of over 200. Funding had been sought by NAVA from state governments to ensure that artists from various parts of Australia could be in attendance.

Keldoulis' welcome followed that of Gadigal Elder, Uncle Allen Madden, who offered a generous Welcome to Country. This was followed by an opening address by Rupert Myer AM, Chair of the Australia Council, who provided a statistics-fuelled and optimistic overview of Australia's changing cultural landscape and the Australia Council's new initiatives to engage in the most 'ambitious' ways with artists, organisations and audiences. Hearing empirical evidence of the increased recognition of art's contribution to the daily lives of Australians was indeed heartening, especially given the recent passing of Australia's one true Prime Ministerial champion for culture, Gough Whitlam. This data takes on increased importance in light of the Federal Government's continued undermining and cutting of arts organisations and their budgets.

Professor Nikos Papastergiadis addressed the audience with a keynote lecture that also considered the changing landscape of cultural production, circulation and engagement, this time in the context of a borderless world. Increased mobility, visibility and interaction were all cited as key agents for a contemporary art world constantly in flux, and the idea of 'cosmopolitanism' was introduced as an approach to 'looking out'. Papastergiadis' explanation of normative and aesthetic types of cosmopolitanism was particular engaging for this audience: the philosophical, social and anthropological approach being one to reach for, to become; and the aesthetic approach being embodied and in the now. The statement, 'I can't stop making the world' was cited by Papastergiadis as a way of capturing the feeling an artist has every time they make work. It is a powerful phrase that returns the authority of subjectivity, which begins in the senses, to the artist.

The day continued with a session on censorship and when it may be justified. Chaired by Sydney artist Zanny Begg, this topic has been high on the arts' agenda in 2014 with the case against Melbourne artist Paul Yore being recently dismissed from court. Begg categorised four types of censorship and noted the implicit and explicit nature of its application. Dr Peter Bowden, a recent author on whistle-blowing, provided a taxonomy of censorship that also drew attention to the complexity of its language and meaning. His understanding of the potential for self-censorship to be a powerful political choice was also poignant given the recent artist boycott of the Biennale of Sydney. Julian Burnside QC AO, who has defended a number of artists and arts organisations against censorship claims, began his presentation quoting Bertolt Brecht: 'Art is not a mirror held up to reality but a hammer with which to shape it'. He spoke of the all too frequent occurrence of taste being a measure of what should be censored, and raised the idea of selective censorship as a real problem in Australia: how could people rally against Bill Henson's portraits of nude children, for example, and yet stay quiet on the incarceration of children in Australia's detention centres? The session concluded with comments by Melbourne art critic Robert Nelson who aptly recognised censorship as a form of bullying in contemporary Australia. Nelson's 5-point OH&S assessment of censorship is a rational tool for organisations feeling the pressure of Brandis' conservatism, and I hope it is published on NAVA's website.

The afternoon was structured into a series of Break Out sessions of which I was only able to attend one: What should we be worried about? What are the crisis points? This panel was moderated by Cross Arts project director, Jo Holder, with a strong introduction questioning the relationship between artists and art institutions, specifically whether institutions today were doing enough to protect artists. The session continued with reflections from economist David Throsby on the circumstances of artists and the impacts of copyright, re-sale royalties and cultural policy. Artist Lucas Ihlein spoke about the collective desire for art to create positive change but at what cost to the environment, citing a number of recent projects including his Environmental Audit, presented as part of In the balance: Art for a changing world exhibition at the Museum of Contemporary Art, Sydney in 2010. His observations of art as an agent and the need for artists to remain nimble resounded with the audience. Artist Elvis Richardson spoke about her active website project CoUNTesses, which makes tangible through data visualisation the gender inequalities that exist in the representation of artists within collections, art prices, contemporary art, etc. Richardson spoke to the ongoing ramifications this imbalance has on the types of works, narratives, histories and ideas that enter collections and public consciousness.

Other sessions included: Is the art world homogenising contemporary practice? Here Melbourne academic Ted Colless spoke to the 'unworldly' in art and the need for art that walks up to and into the abyss. Melbourne-based writer Phip Murray spoke to current trends in funding for the arts in Australia, citing our misplaced obsession with the 'new' which is in no way deeper or better than the 'old' or more established. Academic Marie Sierra discussed funding and arts education, arguing against a competitive market system and for a framework in which courses that make money subsidise those that don't. Franchesca Cubillo also spoke to the homogenisation of Indigenous art by white culture and the need for increased space and support for more Indigenous writers, curators and academics, as well as artists.

In Does a gift culture become embedded in international exchange? Gallery 4A Director Aaron Seeto addressed the nuanced distinction between 'culture as business and the business of culture'. Magdalena Moreno from the International Federation of Arts Councils and Cultural Agencies argued for art's autonomy to 'own' the message rather than being instrumentalised, while Sydney-based independent curator Jasmin Stephens spoke about the danger of artistic exchange becoming codified.

The first day of Future/Forward concluded with a presentation by Sydney artist, Lindy Lee, whose personal story brought to mind Nikos Papastergiadis' account of taking one's bearings from the South in a 'multi-directional' world. It was a suitably reflective way in which to end a jam-packed day of philosophy, policy and practice, and left audiences energised for a second day of discussion.

Hannah Mathews is a Melbourne-based curator.