Chloé Wolifson reports on the success of this year's fair, the experience of several participating galleries and its popularity with collectors and the general public. 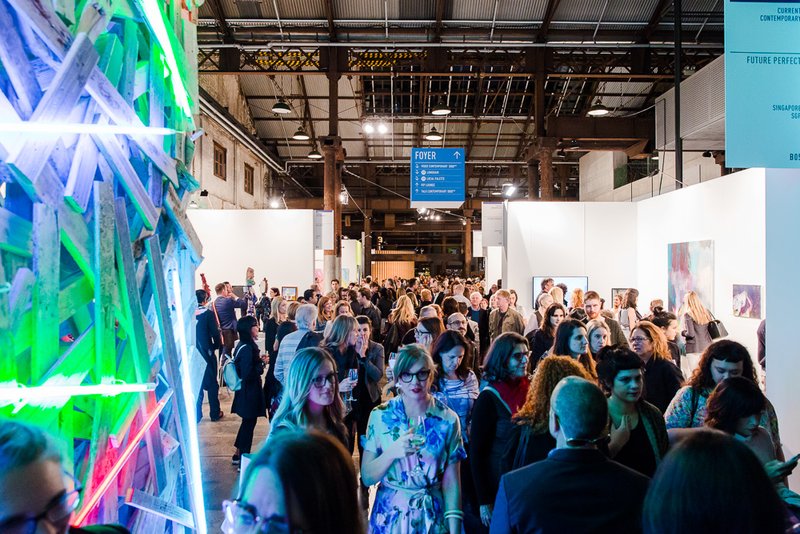 Gallery directors are the first to admit that galleries are attracting fewer visitors. Art fairs such as the recent Sydney Contemporary held at Carriageworks, are simultaneously antidote and contributor to this, allowing visitors to see endless artworks, discover new artists, connect with out-of-town galleries, and disseminate images online. It’s a self-perpetuating cycle showing no signs of abating. This second iteration of the biennial fair achieved sales of over $14 million and attracted 30,150 visitors to over 90 exhibitors - commendable considering its fierce competition around the Asia-Pacific.

Despite Australia’s geographic isolation, 30% of exhibitors comprised international galleries from 14 countries. For Singapore’s Future Perfect, Sydney was a logical choice for the gallery’s first fair given its Australian-born directors and local clientele. Director Nina Miall explained that although Future Perfect also represents Australian artists, “we concentrated the booth on Asian and European artists…because that helps the internationalisation of [the] fair. It’s been an interesting exercise for us…about how readily different artworks travel.” While British artists were better received by Sydney audiences than in Singapore, there was less interest here in Asian artists that do well on home ground.

Miall’s belief that the fair is “coming of age” was echoed across the booths. The confetti-like distribution of VIP passes in 2013 saw thousands crowd the opening. This time, serious collectors were afforded a preview – much to exhibitors’ relief. “That was a smart decision,” said Rhianna Walcott of Artereal Gallery. “We [were able] to have interesting discussions with collectors during the VIP opening, and actually talk about the work in a way that I don’t think we did last [time].” Amanda Rowell of The Commercial, who did most of her business during the VIP opening, agreed: “selling art is about focusing people’s attention.”

William Nuttall of Niagara Galleries made the majority of sales to existing clients. “I think that’s always going to be the case in Sydney and Melbourne,” he said. “If you capture somebody new, then that’s great.” For some, capturing new clients has become easier with Art Money. Both Walcott and William Sturrock of Michael Reid Gallery praised the interest-free loan program for encouraging aspiring collectors to jump in.

Some exhibitors showcased solo artists while elsewhere group hangs reflected galleries’ signature aesthetics. Stephen Aguilera-Mendoza of A-M Gallery, presenting work by Jan Riske and Justin Cooper, explained that, “The conversations are tighter and more intense, but we’ve tried to…put together something that looks like a gallery show. People have responded well to that.”

Galerie pompom focused on five artists working in vibrant palettes across media. Gallery director Samantha Ferris explained that this experience had been quite different to 2013 when the gallery showed a single artist in a smaller stand. “Last time we sold out, basically. In terms of sales this time it’s been slower. We’re thinking about that. It will take a while to digest.” With Fair Director Barry Keldoulis keen to point out that many sales happen in subsequent weeks as a direct result of the fair, time will tell whether these risks pay off.

While Ferris stated that overall “we’re really happy with the experience,” pompom had found visitor numbers a problem in the enclosed space of Bay 17. It was a sentiment echoed by Nuttall whose gallery was found in Bay 20. While the relative quiet of these spaces was welcome from a viewing perspective, it was clear to gallerists that the cavernous Bays 22-24 were where the action was.

While prices ran the gamut from accessible to ‘blue chip’ and the intimidating POA, projects within the fair showcased less collectible forms such as Installation and Video Contemporary. The technicolour Rosie Deacon was a highlight of the inaugural Performance Contemporary.

Another debut was Paper Contemporary, focused on printmaking. Its relatively down-to-earth vibe didn’t appear to affect visitor numbers or enthusiasm. As Alan Junior from Umbrella Studio, North Queensland explained, “It’s a friendly atmosphere, more of a market…so it’s been good for sales but also for getting our brand out [and] letting people know that Townsville printmakers are of similar [quality] to anywhere else.”

While visitors to fairs are entertained and educated, those in the sector brace for peak visibility and opportunity. Fair organisers, artists, and galleries should be congratulated for bringing art to wider audiences. Nuttall, who established his gallery 37 years ago, reflected that “when I look back to the time pre-art fairs, there was a very small viewing population - you didn’t sell much. Art fairs have certainly opened the art world…It’s a good thing overall but hard on the gallery people. It’s costly, it’s draining, but we all keep coming back.”

As Sydney Contemporary drew to a close, the consensus among exhausted gallerists was indeed to return in 2017. “Art fairs are a really important part of the art world now,” mused Nuttall. “It’s the new way - like it or lump it.”

Chloé Wolifson is an independent arts writer, curator, and arts administrator, based in Sydney, Australia. chloewolifson.com