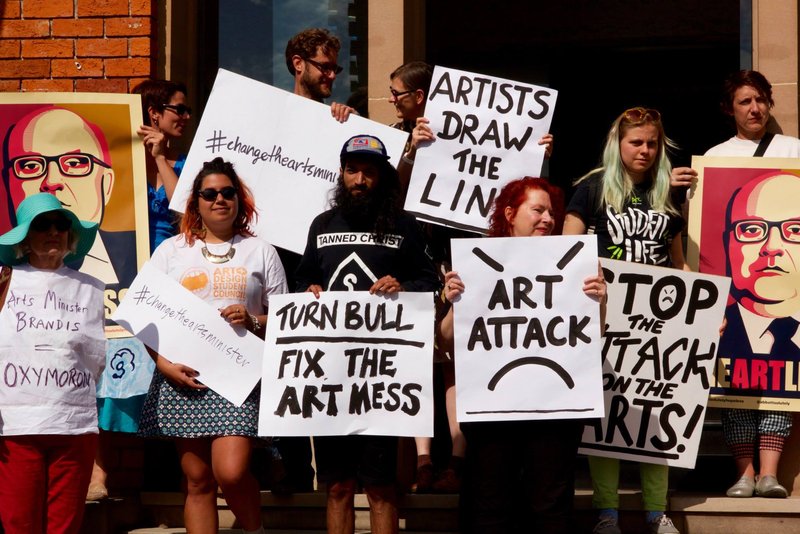 Expectations across the arts community are high that the new Arts Minister, Senator Mitch Fifield will respond speedily to the persistent and strident calls from all parts of the arts sector to reverse the widely condemned decision made by his predecessor, Senator George Brandis to cut funding to the Australia Council.

Immediately following the change of LNP leadership, arts groups acted quickly organising demonstrations and sending letters of protest to the PM, calling for the sacking of Brandis and the appointment of a new minister.

Tamara Winikoff OAM, Executive Director of the National Association for the Visual Arts (NAVA) and co-convenor of ArtsPeak (the coalition of peak national arts organisations) said in response to the news, “In making this appointment, the new Prime Minster, Malcolm Turnbull has demonstrated that he has heard our call for him to intervene and clean up the arts mess.”

“NAVA enthusiastically welcomes the change of Minister and pledges to work with Mr Fifield to assist him in making informed authoritative decisions and ensuring the sustainability of the sector by immediately restoring the Australia Council’s funding at least to 2013 levels,” Winikoff continued.

“We hope the new Minister will work to genuinely build the strength of Australian culture by being an effective advocate, undertaking appropriate research and consulting with informed representatives in the arts sector to develop and implement an evidence based arts policy. We will be looking to him to secure the required levels of funding to realise the vision in such a policy,” Winikoff concluded.

Senator Brandis repeatedly raided the Australia Council’s funding allocation to create his own pet projects: the National Program for Excellence in the Arts; and the National Book Council. These were to be funded at the expense of core programs which directly foster the creative efforts of contemporary artists and support the small to medium arts organisations which provide the essential infrastructural base for their work.

The additional objection raised by the arts sector was that the Brandis programs would be under his direct control, opening the way for politicisation of arts funding decisions and duplicating the role of the Australia Council without any perceived benefit.

The new Minister will have a rich resource base of data to draw on, resulting from over 2260 submissions to the Senate Inquiry into arts funding currently being conducted, with public hearings taking place around the country.

To arrange interviews and further information contact Yu Ye Wu on 02 9368 1900 or ywu@visualarts.net.au.
NAVA is the peak body representing the professional interests of the Australian visual arts sector.