A bite from the Big Apple

Michael Zavros, a recent beneficiary of the Australia Council for the Arts' residency program, gives a glimpse into his time at Greene Street studios and the effects on his practice. 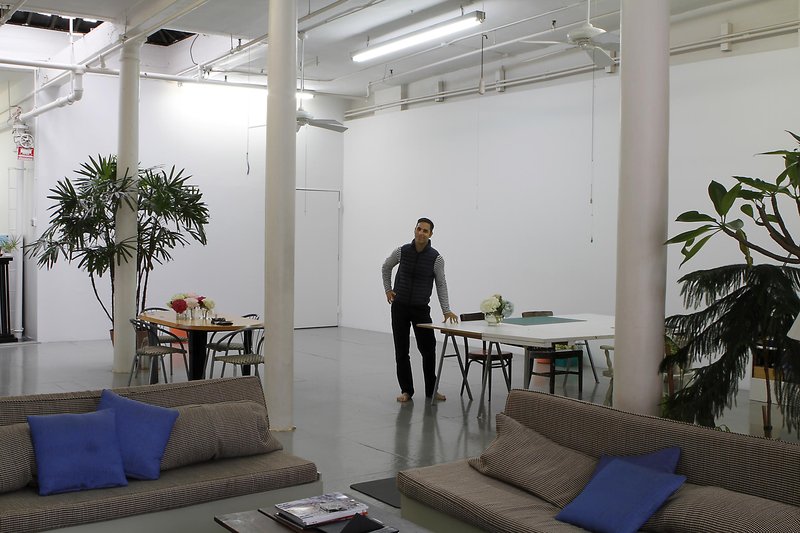 I was the recipient of OzCo's Greene St studio in New York for the fall/winter period, 2014/15. The studio is a grand gleaming loft space, 150 square metres of studio/gallery with open plan living bedroom, kitchen and bathroom. A classic 5th floor New York walk up, the studio is situated in downtown Soho, once the stomping ground of artists and galleries, now a boutique-shopping mecca. Indeed thanks to the city's rent control, OzCo's 1976 handshake deal with the studio's administrator Kathy Morano, the space now boasts the flagship stores of Louis Vuitton and Dior amongst its neighbours on the original cobblestone Greene Street.

The jewel in OzCo's residency crown for almost forty years, Greene St is an impressive space even to local visitors. Morano relishes that moment she introduces each new artist to the studio for his or her precious three months. 'You gotta see the look on your face' she tells me in her sassy NY accent that first evening I clap eyes on what will be my home in New York. She's also kitted the place out with pretty much anything any artist could hope for in a studio space. Everything from power tools to canvas stretchers, high speed Internet and several hundred channels on cable TV are meticulously maintained in the pristine space. More importantly, there are membership cards to every major museum and gallery in New York, which means Greene St artists don't queue with tourists.

An important factor of the grant itself is that it's a development grant and isn't outcome based. This allows the awarded artist a level of autonomy and the opportunity to engage with the studio and the city however much they desire. New York is arguably the loudest, busiest, most stimulating city in the world. Its plethora of public and private museums holding almost everything an artist has ever studied or admired, together with the world's most concentrated commercial gallery system makes it an incomparable destination for any professional artist. Quite simply New York is a reminder that the art world in Australia is very small and its easy for an artist to become too focused on what is happening regionally at home, to look inward. It's this stimulus, an immediate connection to a giant art world and a buzzing metropolis that is such a draw card. Except when it isn't.

The challenge for artists in residence in New York is whether to stay in and make, or go out and soak it all up. The studio allows the best of both worlds; a hermetically sealed retreat and most artists in residence have been prolific in their time at Greene St. With a solo exhibition at Art Basel Hong Kong looming in March 2015, it was necessary for me to spend most days painting.

Residencies too provide so many shifts in an artist's perspective, from profound changes in the direction of a practice to the simple changes wrought by the acquisition of different materials to what one is accustomed to using back home. Residencies are a reminder to refresh your practice, stay keen and not get stuck in a rut – sometimes you change direction, reprioritise, and come back wanting more or something different. Being out of your comfort zone (and artists are generally good at this) teaches you to be resilient and look outside the usual way you work.

Even for an artist like me who avoids fellow artsworkers or anything bordering on networking in my day to day art career, it's almost impossible not to make professional connections in New York, teeming as it is with curators, collectors, artists and somewhat surprisingly, a vast community of Australian artists, many of whom are based in Brooklyn trying to make it big in the Big Apple. There is an anxiety sometimes about stepping away from one's practice for a length of time, but the three months passes exceptionally quickly. It is just enough time to return with a renewed vigour. In some ways, that time away reminded me of why I am an artist.

Michael Zavros is an Australian artist who works across painting, drawing, sculpture and film.