Could we get an artist to be our Prime Minister?

We can’t get our Prime Minister to be Arts Minister, but could we get an artist to be our Prime Minister? That would make for a very different kind of Utopia. Poland, Iran, Albania, Britain, they’ve all done it. Why not Australia? And what better time than now? Our new PM pines for an Australia that is agile, innovative and creative. 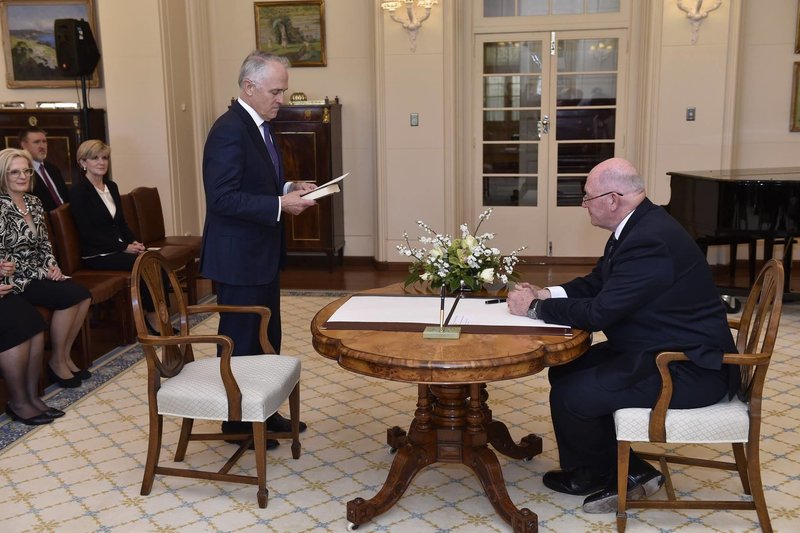 Utopia isn’t what it used to be.

Not the Garden of Eden, Shangri-La or Elysium, it is now synonymous with an ABC-TV show that brings managerialism right into our lounge rooms introducing words like productivity and efficiency into the household lexicon.

Two other words ‘Prime’ and ‘Minister’ have also had their meaning drastically altered recently. When placed next to each other they comprise the title given to the leader of our country. In his speech announcing he had taken over the job of ‘Prime Minister’, Malcolm Turnbull declared that in his Cabinet he was “first among equals” making the words ‘Prime Minister’ synonymous with consultation. When was the last time that connection was made?

Despite the fact he is our fifth Prime Minister in as many years, Turnbull’s ascension was not greeted with groans of embarrassment but a sense of optimism and hope.

He has brought the promise of civility with his dulcet, tonal adjustments and smooth logic. A month on and we are yet to see its affect on policy but listening to a politician talk in public in the same way he talks in private is mesmerising. How many of us could understand Rudd, Gillard or Abbott when they spoke respectively in policy-wonk gibberish, focus-group catchphrases and three-word slogans. All three seemed to speak to a hidden agenda that had little to do with the rest of us.

Unsurprisingly, there was a moment in the transition that the arts sector was aching for Turnbull to take on the Arts portfolio in the wake of the train-wreck that was the previous Arts Minister, George Brandis. Not since Paul Keating have we had a politician whose regard for the arts was on public record and who could advocate its value with plain speaking. A utopian moment for us - and the PM! Not to be.

But hope is infectious, and a little too much oxygen in the political space can hyperventilate the imagination: okay so we can’t get our Prime Minister to be Arts Minister, but could we get an artist to be our Prime Minister? That would make for a very different kind of Utopia. Poland, Iran, Albania, Britain, they’ve all done it. Why not Australia? And what better time than now? Our new PM pines for an Australia that is agile, innovative and creative.

The arts are the sector with which this mantra strikes the loudest chord. Imagine if it was taken up, seriously within the arts and then across society. Imagine if the arts were integrated into the national conversation and embedded in all social activity. Imagine if the intrinsic value of the arts was widely appreciated for its agility, innovation and creativity (a tautology, really) and for the provision of meaning to our daily life.

Imagine if the arts genuinely embraced one of its greatest strengths, its relatedness to other things, interconnectivity. What if over the next twenty years, artists were insinuated into every sticking-place of society, into the in-between spaces of the law, banking, manufacturing, environment, in the middle and on the edges of every where and every thing. What if their practices and processes, honed in the studio, the rehearsal room, in the privacy and safety of their minds, were sought after as massive leaps in technology proposed problems that only an acute, artistic sensibility could solve.

Time and again, artists have developed better questions for solving difficult problems; time and again they have seen the connections between things when others could only see the ‘things’; time and again they’ve translated the incomprehensible into the emotional and the real. Who better to lead this new Australia than an artist who intimately and implicitly understands that meaning is found in the blur around things; who better than an artist to identify the grey area as the solution and not the problem; who better than an artist to invest empathy in every, single decision.

If she stands for PM, I’ll vote for her.

That’s my kind of Utopia.

David Pledger is a contemporary artist working within and between the performing, visual and media arts in Australia, Asia and Europe. His live performances, installations, interactive artworks, documentaries and digital art have been presented in various locations including theatres, galleries, museums, a car-park, a stables, a cattleyard, a suburban house, a film studio and at the Australian Institute of Sport. He is a member of the Research Unit in Public Cultures at Melbourne University and currently undertaking doctoral studies in the School of Architecture and Design, RMIT University, Melbourne. davidpledger.com