Impact of budget cuts on the visual arts sector

As a journalist, I’m called upon to travel to Canberra annually to report on the federal budget. In most years, issues such as health, education and defence are paramount. This year’s budget was different. One of the most interesting announcements was a short section in the budget papers concerning the Ministry for the Arts. 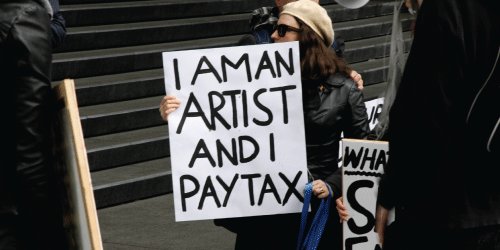 As we now know, the announcement heralded an unprecedented funding raid on the Australia Council, as Arts Minister George Brandis’ moved to grab $105 million from the Australia Council and give it to a new Excellence Programme that will be administered by his own department.

Because of the way the funding cuts have been slated, the cut to the Australia Council’s discretionary funding is approximately 28 per cent. As a result, the raid has already thrown much of Australia’s cultural sector into chaos. Many artists and producers are only now working through the implications.

One of the most interesting aspects of Brandis' raid is the remarkably widespread damage it will do to a number of different cultural industries.

For the visual arts, the blow is likely to be particularly acute. The bulk of the Australia Council’s austerity will be borne by the so-called “small-to-medium” organisations. Many of these are galleries, museums, art magazines and visual arts support organisations. The damage will be exacerbated by the diverse and fragmented structure of the visual arts sector, where smaller companies outweigh larger public institutions (in comparison to the major-heavy performing arts sector).

The impacts on working artists will also be significant. The Australia Council is by far the most valuable supporter of artist-run initiatives and of the careers of individual visual artists.

As a result, the impact of the Australia Council austerity on the visual arts sector in Australia is likely to be significant. At this stage, we don’t know how bad it will be, but recent State funding cuts to the small-to-medium sector in Queensland had a big impact, with a number of smaller galleries and ARIs shutting down.

Matters are not helped by the dearth of high quality statistical evidence for the sector. The timely, robust and detailed data available to industries like mining or retail is simply not available to the arts; as a result, we can gauge only snapshots of the full economic value of cultural activity.

What we can say is that the visual arts is a large and growing sector. The economic value of the visual arts is impressive. In terms of consumption, the Australian visual arts and craft industry is worth well over a billion dollars annually, at $1.04 billion when last measured in 2009-10.

The Census tells us that there were more than 15,300 working artists in Australia in 2011, to which we can add a rapidly growing sector of cultural workers whose skills are directly based on the visual arts, such as illustrators, graphic designers, animators, web designers, art teachers, curators and conservators. Taking all these categories into account, visual arts employment in 2011 exceeded 86,000.

The best quantitative work in cultural employment in Australia has been gathered by QUT’s Stuart Cunningham who argues that “the quite embedded nature of needs for services into the digital economy” is driving the need for creative workers.

Perhaps most importantly, more than 4.1 million Australians participate in the practice of making art or crafts each year. This makes the visual arts and crafts the most important everyday form of cultural participation tested by the Australian Bureau of Statistics.

There, however, remain many gaps in the data. The last ABS survey of commercial galleries in Australia was in 1999-2000, while the most recent data published as part of the Visual Arts and Craft Strategy is from the late 2000s. Worse, recent funding cuts to the ABS itself threaten the future collection of cultural data.

For these and other reasons, gauging the full impact of the cuts is tricky. There is no doubt that, as an art form, the visual arts occupy the largest percentage of the now-threatened key organisations list. Specific programs like the artist-in-residencies – historically, core planks of Australia Council’s agenda – have already been killed off. The abolition of ArtStart destroys the most important federal program for supporting young and emerging artists.

However, the real worry for the sector is the future of the Visual Arts and Craft Strategy (VACS). Ever since Rupert Myer’s groundbreaking first report, VACS has formed the cornerstone policy for the non-institutional visual arts sector. Yet although VACS funding been has been confirmed for the next four years, the current situation may affect how the Australia Council negotiates its partnership with states and territories over shared clients.

What is undeniable is that independent artists will suffer. Their meagre success rate in individual applications will decline, as far less money is left in the grant pools. Given the timing and the magnitude of the funding cuts, the likelihood is that the new round of austerity will have a measurable negative impact on Australia’s visual arts ecology.