We chat to Art Collective WA's Chair, Merrick Belyea, and Director Felicity Johnston about their unique gallery model, the circumstances surrounding its formation and its focus on the careers of established Western Australian artists. 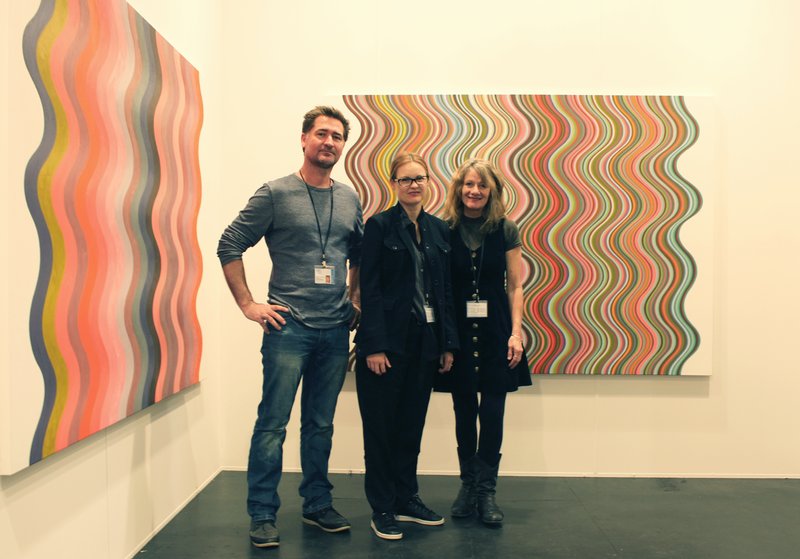 Can you describe Art Collective's WA model and how it is structured?

Felicity Johnston: We are a not-for-profit membership organisation and incorporated. We have a membership of 30 artists, all established senior Western Australian artists. To be a member is generally by invitation only. We do show other WA artists, about 50 - 60 so far in the two and a half years. There is a board for the organisation that is made up of artists and they employ me to run the organisation for them.

Merrick Belyea: We set up a proper non profit structure so the board makes the decisions on the direction the gallery is heading towards. The income that is generated goes towards the collective. The Director chooses the way to run the space, contacts the institutions and the sales. When there is a sale the collective gets 40%, the artist gets 60% so in that sense it is no different to a commercial gallery. It's where the 40% goes and then what it is spent on.

How does Membership work?

Merrick Belyea: There is a core group that started the collective. Our only criterion was 15 years contribution to arts practice in the visual arts in Western Australia. That can be a fairly broad notion but the idea is that the group of 12 have enough experience in the beginning to tap someone on the shoulder. We do show other artists work (non-members) when it fits our existing mandate and we think someone is important enough to be shown and that it will advance everyone's career. It puts a focus on good quality Western Australian art. They don't need to be a member it's just that members are the ones who make a decision on where our focus is and we're aware that that focus will shift over time.

How do you select your artists?

Merrick Belyea: We rely on a lot of Felicity's expertise in the art world, her contacts, what she thinks will work and not work. She presents that to the board and the board make that decision. If the members have a problem with what Felicity has proposed they come to the board to discuss it. And thus far no conflicts, plenty of discussion. Sometimes it's like coming up with a band name but it's a healthy discussion.

Why did you develop this model? Was it in response to changes in the Perth environment and the closure of several commercial galleries?

Felicity Johnston: The six major galleries all closed down within an 18 month period so we had a lot of well known artists no longer with anywhere to show their work. They got together to work out opportunities and the collective was born. Ideally the aim of the collective is to ensure artists are visible within the Perth community and beyond. We want to get our artists out and about, whether that's through artists' books, art fairs or talking to other galleries on their behalf. As part of that we need to be attending these kind of events (ie. art fairs). Artists are not eligible to apply for many of the major art fairs so we provide that platform.

Merrick Belyea: Perth is a relatively small city but without all these opportunities (to exhibit) you don't get to meet, network and see what other people are doing, it was simply a response to that. A variety of artists told me as a result (of commercial galleries closing) they would stop working. The immediate response from some of the younger artists meant that they moved to another city like Sydney, Melbourne, Brisbane. I couldn't see the more established artists starting again. The established artists tended to stay but tended to get very cynical very quickly. So myself along with a number of other people were talking about what we could do, and we were luckily approached by Diane Mossenson (of Mossenson Galleries) who said she understood the situation. She was rationalising what to do with her space in Subiaco and suggested we might want to take on some of that space. Mossenson Galleries was also very helpful in advising us on how we should structure ourselves based on a not for profit model and so we went down that route. They remain great patrons of ours providing space at less than usual Subiaco rents. They have a strong interest in Australian Indigenous art but also contemporary Western Australian art and have been great supporters.

How has the response been so far to Art Collective WA's model?

Felicity Johnston: A percentage of our sales are to institutions and corporates. We are still slower to reach a Perth buying public which is one of the reasons why galleries in Perth are closing because there isn't an interested enough population to sustain a large scale commercial enterprise.

Merrick Belyea: More than we expected. They too (major institutions and corporate collections) realise that without commercial galleries there would be nowhere for them to see what's going on in Perth. We hope that the commercial gallery sector in Perth will eventually revive itself and galleries will pop up and take our artists. In a funny way part of our model is to make the collective redundant. That would be great if it happened and if it did revive, all our artists would go back to being represented well by commercial galleries. There would be more than two WA galleries at Sydney Contemporary and the Universe would be restored.

What do you think are the current issues facing WA and the arts sector?

Merrick Belyea: They're not dissimilar to anywhere else in Australia. It is about artists earning a living and being viable businesses. Quite often it's down to funding and from my personal perspective, government should be funding more. The push at the moment is for organisations to get the majority of their funding from the private sector and the government will step in and top them up. I see a real danger in that the top up may gradually diminish until the funding disappears. The other issue for WA artists is isolation - yes there's physical isolation but we are all used to it....

Do you think the internet and the online environment helps to solve this issue?

Merrick Belyea: I grew up pre-internet. It helps with immediacy through email. Digital imaging makes it a lot easier. When I left art school in the 1990s the trick was to get your stuff in a folio, fly across here (Sydney) knock on the door, be ignored by the gallery owner and then come back next year and do it all again. In effect this is all we are doing in a virtual world. But it's still got to be face-to-face in our world. I've never seen a virtual career flourish. You've got to meet the gallerists, you've got to meet the artists, and you've got to develop a relationship over the long term and that's why art fairs are important. Western Australian artists have always been used to getting out of town. We know exactly what's happening on this side of the world (the Eastern states). Because we come across so much we are aware of it, and we want to be part of it. Sometimes I wonder if the rest of the world wonders what we are doing over there.