Claudia Nicholson is one of four 2015 recipients of NAVA’s Freedman Foundation Travelling Scholarship for Emerging Artists. Through her multi-disciplinary practice, Nicholson explores Latin American folklore, pre-Columbian artefacts and Chola culture. For her, this research is an avenue for understanding her position amongst Australian, Latino and Amerindian cultures. Through the support of this scholarship, Nicholson will travel throughout South and Central America to visit various cultural events and shop for ‘counterfeit goods’. 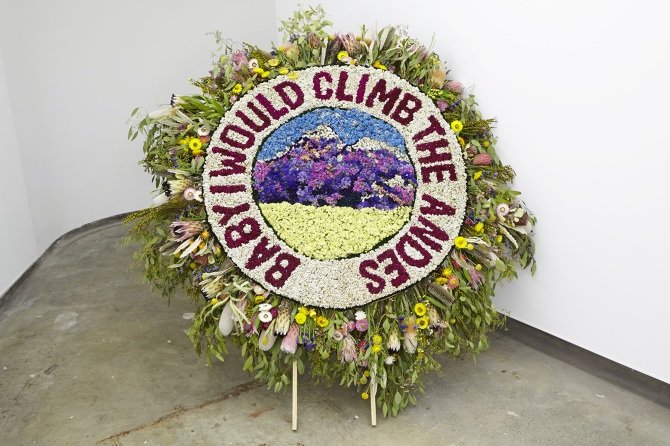 As an exhibiting artist, you have made work using video, painting, flower arrangements and textiles but your most recent output has been heavily focused on ceramics. What has pushed you towards this medium?

I understand clay as a material to be essentially cross-cultural, which is something that resonates with the objectives of my practice. In 2013, I travelled around Peru and Colombia visiting museums where I was able to see pre-Columbian ceramic artifacts first hand. It was also during this period that I did an artist residency in the Peruvian Amazon. During my residency I was taken to a Shipibo-Conibo community called 'San Francisco' whose residents specialise in ceramics. The residency provided me with the opportunity to make my first ceramic work.

What was it about seeing the ceramics that was so impactful?

Well, in Colombia I came across a collection of ceramics from the early 1900s by the Alzate family. At first I took these to be pre-Columbia ceramics and thought they were really beautiful. But when I went home and did more research I found that they were knock-offs. The story goes that this family created and buried these objects. They then took European collectors around to excavate these sites so they would buy them for their museum collections. In discovering that what I thought was legitimate was false, I realised that these objects occupy the same cultural space that I do. They’re fakes, but they’re not.

Why is this a space you feel you occupy?

My work is about my personal identity. I construct my own identity with a fluidity and freedom and privilege that isn’t afforded many people. By exploring Latin-American folklore and mythology as well as certain Australianism, through my practice I am choosing how I want to represent where I come from. My practice is a process of constructing identity. It is a way of carving a space for myself in a history that I am still getting my head around, and sometimes that space is fictitious.

Your work is often populated by gold, diamantes, and/or brand logos such as Adidas or the Nike tick. Sometimes these are hidden and sometimes they are very overt. What interests you so much about this showy brand-orientated mode of self-presentation?

In my work, the gold is a reference to South America’s colonial history as it was a material frequently used to make Pre-Columbian idols, many of which were later melted down by the Spanish and re-made into Catholic artifacts. Gold also has a big presence is Chola culture. To me Cholas represent ideas of cultural colonisation, resistance and displacement. ‘Cholo’ was originally a derogatory term used to describe Mexican immigrants in California during the gold rush in the mid-1800s. For young people of Mexican heritage who grew up in the United States, wearing gold is a part of re-claiming these cultural heritages. However, the gold that they are wearing is often fake, but its worth is as a cultural symbol.

Along with the gold, Cholas often wear Nike and Adidas clothing. In my work, if you look closely at the Nike ‘tick’ and the Adidas logo, you’ll noticed that they’re all fake; so its often ‘NKIE’ and ‘Adidad.’ My interest in these forgeries came from a bag I bought in Colombia that says Adidad. By bringing these fake logos into my practice I thought it would be a playful way of indicating authenticity and appropriation. In my work I appropriate cultures that I belong to and these symbols are a way of making this explicit.

You will be undertaking a research trip across South and Central America to attend various religious and secular cultural festivals. What are you looking for?

I first head to the Ouro Festival in Bolivia, which is a folklore festival in the Andes. I then go to Guatemala to look at sawdust carpets. Sawdust carpets are elaborate artworks made of coloured sawdust stenciled onto the road. They are created over night during Holy Week and are walked over by a religious procession the next day. I will be making a sawdust carpet at 4A Centre for Contemporary Asian Art in Sydney, for the exhibition Future Archaeology, however, seeing the sawdust carpets in Guatemala will give me a better understanding of their cultural significance. While making work from a distance speaks to my practice, I also think it’s important to see as much as I can first hand to get a better understanding of context so I can contextualise my practice.

The other things I am looking forward to are the things that you can’t really predict, the stuff that becomes retrospectively important. Every time I travel to Latin America I come back with new materials, or new ideas and a new understanding of history as well as contemporary culture. It is the things and experiences you can’t prepare for that always enrich my practice and allows it to develop.