In July Sainsbury Sculpture Grant 2014 recipients, Heidi Axelsen and Hugo Moline completed their artist residency at Australia House, Echigo Tsumari, Japan (2013-2015). In collaboration with fellow Australian artist Nathan Hawkes, and the local Japanese community, they developed a new public art work, 2000 Waraji 200 Feet which was commissioned especially for the 2015 Echigo Tsumari Art Triennale. During Axelsen and Moline's installation of their recent work Owner Occupy in Martin Place Sydney, part of the Groundwork 2015 festival, we spoke to Heidi about their latest project and how their residency experience has shaped their practice. 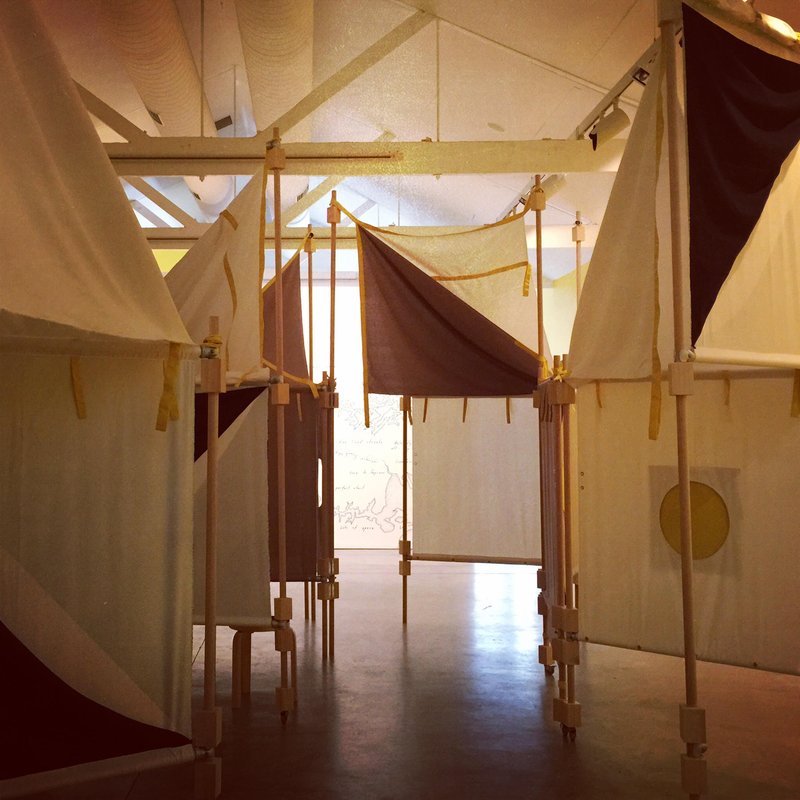 What have you been recently working on?

We have been working on Owner Occupy which was commissioned by Sherman Contemporary Art Foundation. It’s a series of temporary structures in response to the housing crisis and property speculation. The idea is the land is open for occupation again back when terra nullius was declared. It’s part of this fictional narrative that wherever you occupy you own that space.

How has the project been received?
People have really responded well to the structures. They’re quite a friendly aesthetic with the material used being handcrafted timber. People have also enjoyed the more political intent behind it and the map which goes with the work is a big map of Sydney where we have used real estate slogans that currently characterise different suburbs. We have mapped them across Sydney and people have really enjoyed this.

As the 2014 Sainsbury Sculpture Grant Recipients you used the opportunity to complete the residency in Japan at the Australia House, Echigo Tsumari. How has this experience shaped your practice?
I think it still continues to shape our practice. We were given the opportunity to go back there four times. The experience of working in such a different culture with very different ways of approaching work has really impacted how we then approach every new project, with openness and without preconceptions of how it might turn out.

What were the cross-cultural challenges you experienced and how did you overcome them?
One of the biggest challenges was the way of working with community. It was very delightful because in Japan every community engagement process was very well organised, but then also quite formal. So that was quite a challenge for us because we are use to working with people perhaps in a more informal or open way. Whereas it was fairly directive in how we were expected to engage with people. That was a challenge for us. We found our way through it. We found developing meaningful relationships with the local people was the best way for us to engage in the end, in addition to these formal engagements.

What else did you learn collaborating with the local community?
We learnt some local traditional crafts as well which we were really interested in. We learnt how to weave traditional shoes called waraji. We worked with a neighbour of Australia House and he taught us how you harvest the rice straw and then weave it to create these shoes. The form of the shoe then became a central part of our artwork called 2000 Waraji 200 Feet. The hut is made from 2000 waraji which are in the form of copper shingles created from the form of this traditional footwear. There were many other things we learnt and were really fortunate to meet traditional papermakers and metalworkers as well. The craft we learnt was in a very hands-on way.