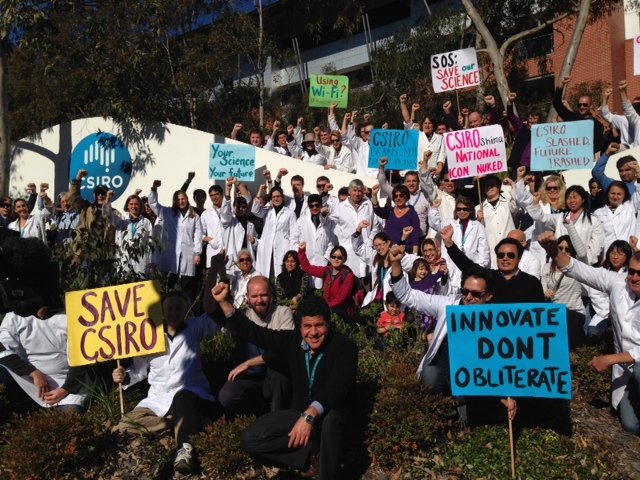 The Commonwealth Scientific and Industrial Research Organisation (CSIRO) is Australia’s largest publicly funded research agency and celebrates a 100 year anniversary of sorts in 2016. So far it hasn’t been a happy party.

A key role CSIRO performs is the provision of public goods, knowledge on the environment, biodiversity, water and air amenity and climate, essential for understanding our sunburnt country.

Most Australians expect their taxes to provide these goods and the community services based on them. However the years of the Abbott Turnbull Government have slashed and attacked public services to the preferment of private interests.

Australia is judged a poor performer in collaboration between the research and business communities, leading the Coalition to direct CSIRO to fix the problem and stimulate ‘jobs & growth’.

This is despite CSIRO only representing 3 per cent of the research sector and having suffered a $115 million funding cut from the same government; resulting in the loss of 1 in 5 staff since 2013.

While Prime Minister Malcolm Turnbull talks big on STEM (Science, Technology, Engineering & Maths) as a driver of innovation; in 2014 the then Communications Minister completely defunded the National Information and Communications Technology Agency (NICTA), leaving CSIRO to pick up the pieces (despite its own budget battering.)

Worse was still to come. Late last year, CSIRO Chief Executive Larry Marshall initiated a process to extinguish much of the public environment and climate science; finally revealing plans to cut 200 climate and environmental scientists (as part of broader cull of 350 jobs) in February.

The news sparked widespread outrage and condemnation; including a global petition of 3,000 international scientists, a critical editorial in The New York Times, many public rallies and forums; not to mention a deluge of letters to the office of the PM.

Even erstwhile Environment Minister Greg Hunt was moved to write to colleague Christopher Pyne seeking the help of ‘The Fixer.’ This pressure - alongside the efforts Australia’s Chief Scientist Alan Finkel - led to a back-down (of sorts) and creation of a ‘new’ Hobart-based science centre in a bid to save the climate research furniture.

With a minimum of 40 staff, some vital southern hemisphere greenhouse gas measurement programs and capacity to model Australian climate will be retained. However many of the careers of our experts and world-leading scientists won’t survive the process.

Ongoing CSIRO cuts will result in the loss of research capabilities that are unlikely to re-emerge in the nascent innovation and start-up sector. Some public goods in science are simply not amenable to commercialisation.

Australia’s vital interests – such as saving the Great Barrier Reef - cannot be solved alone by local mitigation of global threats that cause coral bleaching, for instance. Public science with international influence and collaborative experience is up to the task, however.

Our political leaders need to champion evidence-based policy that serves the public rather than the powerful vested interests of the day. Good public policy must be built on integrity.

Take away integrity and bad things happen. Consider former Minister George Brandis playing favourites with discretionary art grants. It isn’t hard to imagine influential members of the Coalition tacitly encouraging a bit of payback on CSIRO for conducting research into the climate and the environment.

The impact from cuts to public science continues to reverberate; however it has resulted in the formation of a new movement in the community advocating open and transparent prioritisation of research for the public interest.

We can only hope that this momentum in defence of the public good continues to grow and extends to all of our human aspirations; whether in science or the arts.

Dr Michael Borgas is a senior atmospheric scientist and President of the CSIRO Staff Association.