Treahna Hamm comments on the importance of craft and the continuation of the traditional in contemporary Indigenous cultures. 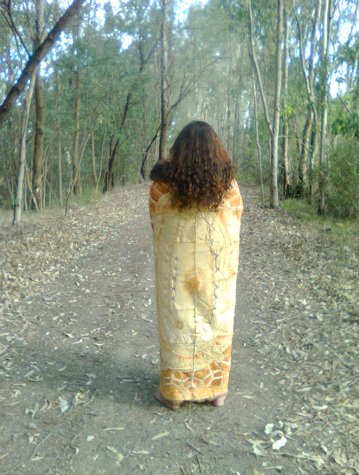 Attending art college in the 1980s and studying with heavy books (from the 1950s) that depicted black and white images of art practice from mainly Europe and America was very different from what I perceived art history and knowledge to be. The regulated texts for art students seemed to me to be another world away. In a sense I felt a form of isolation, geographically and historically as a teenager. Why did I feel this way? Was it because I could not see what I was being taught in regional Australia to rationalise objectively; or was it because no-one could provide a meaningful bridge between the studied art worlds of artists and cultures that seemed to be ‘grafted’ onto an Australian art student’s life in the 1980s?

The teachers’ and lecturers’ role was to bring into being the life and philosophies of artists from various movements and to formulate a window for students to form their first impressions of arts practices; journeys in trying to ascertain a connection.

Involvement in the teaching of craft was always contained within the realm of the arts. However, it was not perceived as being as superior as the fine arts. There always seemed to be a contradiction, though practice with handmade and handicraft elements of skill and imagination were one and the same to me. When I think back to that era now, the categorisations of what was depicted as craft and fine arts has blended strongly within the Australian arts industry over the time, eras and generations since my first impressions of art college.

During my formative years developing my art, I linked to my Yorta Yorta family and tribe after being disconnected from birth. Printmaking had always been my main practice. I travelled home again to the Murray River with the intention of ‘salvaging’ and ‘continuing’ cultural practices in an effort to learn from my Elders and old people. It was a strong imperative personally and intrinsically for me to come home to country on the homelands of my ancestors. To me, my Elders were the last generational link with people who had courage to experience traditional life through clandestine practice and observation, especially in the hard mission times when culture was banned.

I found there was no distinction between what is known as craft/design and fine art when I spoke to my cultural Elders and mentors. This made sense to me. As in Africa with no word for music, in Aboriginal culture there is no word for art/craft/design/fine art. Indigenous arts practice reaffirms, reinforces and continues culture. It makes me and my people strong. It is an extension of self, family, tribe and land. Identity and belonging are central in the explanation of ‘the act’ of creating within your immediate environment learnt from Elders with generational links to the oldest continuous living culture in the world, for future generations to follow.

With Aboriginal culture and traditions being orally based, all practices were indeed our ‘books’ which overlapped and reinforced connections to land and tribe through stories, dance, ceremony, song, painting, carving, weaving, etc. There is no distinction between them all. To say that weaving could be pulled out of the equation because it is more a ‘handicraft’ would dispel the holistic meaning of how culture lives within artists and creative Indigenous practitioners. When weaving with my Aunties, their words and stories are symbolically woven into the object I create. When finished it stands alone as a memory through the myriad of stories, which can then be a vehicle to continue the conversation of cultural and spiritual connection to an individual birthright place in the world.

From the time of my PhD, I have taught workshops which are cultural and craft/design based within schools and for arts organisations. Holistic teachings from Elders and old people lies at the heart of ‘creating’ at workshops, with each individual connected to their environment through their art practice, whether it be weaving or painting. Gulpa Ngawal (deep listening which builds community) incorporates knowledge and practice which is thousands of generations old and still encompasses the lives of Koori artists. I facilitate in the same way as I was taught myself, along the river or with Elders at gatherings. The methodology and Indigenous knowledge systems create ‘safe artistic spaces’ where stories and knowledge are exchanged. What is created and bought to the fore are ‘visible’ links which strengthen the fabric of society, including stories of people from many backgrounds while creating.

Much has changed within the Australian art industry and landscape over the past decade. In 2006 when I was involved in the Biganga (Yorta Yorta for possum skin cloak) exhibition at the Melbourne Museum, art was displayed within this environment alongside museum objects, traditional and contemporary which people may individually have described as having a craft base. During this time, institutions were questioning their depiction of historical voices and how connections could be viewed through contemporary imagery, art and voices. It was in the same year that I participated in Common Goods: Cultures Meet Through Craft also held at the Melbourne Museum. It was significant that the Museum allowed research of traditionally made objects such as the possum skin cloaks from the 1850s. The Museum also exists essentially as a crucial conduit for portraying traditional and Indigenous craft and fine art practices. Together they highlight the link between past and present with the artists maintaining vital cultural links that were once thought of in Victoria as severed and lost.

My own learning and working path has taken me nationally and internationally for two decades. Along the way, there have been important projects which incorporate cultural values and ethics. Water in a Dry Land was a project and exhibition conceived by Professor Margaret Somerville UNSW which incorporated the work of Indigenous artists and their relationship to water as a source of personal and cultural meaning. The other undertaken in 2015 and led by Associate Professor Elizabeth Tunstall Swinburne UT was cultural exchange Living Blue Oz project which saw Chinese, Indian and Indigenous artists researching and sharing knowledge on traditional dyeing, the history and ways in which it can be used as an impetus of use in commercial and educational environments.

The shared history of community and land through multi-dimensional projects can only enhance, benefit and strengthen cultural ties.

Dr Treahna Hamm is an internationally renowned artist who is celebrating thirty years as a practicing Indigenous Artist. Her works are composed with multi-layers of stories garnered from her Yorta Yorta experiences of living by the Murray River in Northern Victoria and southern NSW. Treahna’s practice includes contemporary printmaking, painting, photography, public art, sculpture, possum skin cloaks, murals and highly individual fibre weaving. She works with abstract forms as well as traditional designs from her Indigenous heritage. Treahna has exhibited in New York, South Korea, Hawaii, New Zealand, Paris, Belgium, Germany and the United States. Her vibrant works are in national and international collections. During the last decade, her dedication towards rejuvenating, revitalising and retelling oral history through her own life experiences in Victoria has been a foundation to the collective experience of a new generation of visual indigenous artists of South Eastern Australia.