Playing Off the Field 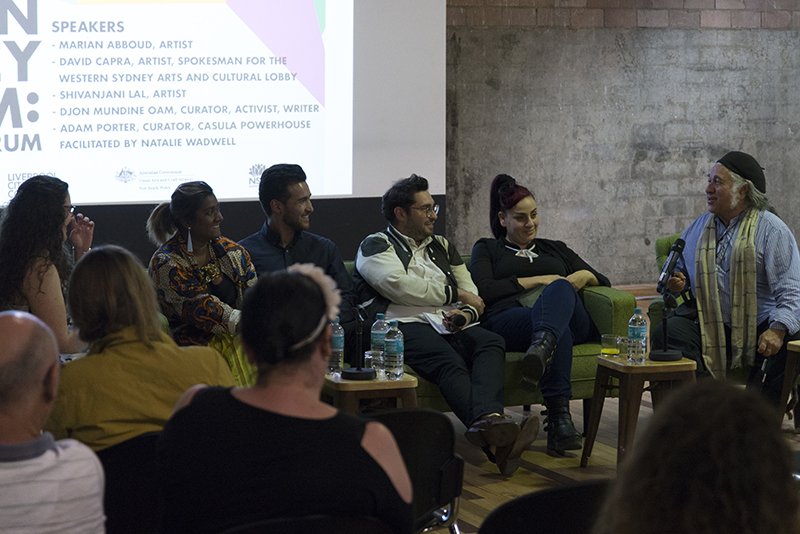 Earlier this month, Casula Powerhouse played host to Western Sydney Jam, a visual arts forum between Marian Abboud, David Capra, Shivanjani Lal, Djon Mundine and Adam Porter. This NAVA-supported event, facilitated by Natalie Wadwell, sat adjacent to the Powerhouse’s current exhibition, Softcore perfectly counterpointing the hard-hitting issues addressed on community cultural development (CCD) in Western Sydney. For most of the evening the panellists shared their experiences of working in the region while directing our focus towards two key concerns: the changing definitions of Western Sydney artists, arts institutions and programs, and the difficulty we face with regard to the disparity of arts funding. Both Capra and Porter made a point to state how the categorisations often linked to Western Sydney such as ‘regional’ and ‘peripheral’ are becoming less and less applicable with our growing population and infrastructure, however it is clear that there remains much work to be done.

Though much of the conversation concentrated on the increased need for spaces and events dedicated exclusively to local arts practitioners (as with Casula Powerhouse’s Marsden Gallery), my interest lies less in the level of visibility than the manner by which we want to be seen. Abboud and Mundine directly addressed this issue, noting that we are not involved in CCD to ‘save anyone’. We are not social workers or journalists (both invaluable professions in their own right), but instead exist to make the intangible dissonances of our surroundings manifest for our audience so that the realm of possibility and change can be explored. Any attempt to merely appease or impose on them our own personal standards eradicates this potential. The most challenging and compelling community-based work strives to actively engage while prompting the community itself to take part in its own transformation. As artists we act as catalysts in the literal production of new communities with their own self-generated identities. In this way we take part in the disintegration of a fixed Western Sydney identity in favour of one that exercises a keen adaptability. Granted, as Lal pointed out, we will always benefit from being aware of the source and location of anyone who uses the term “Western Sydney artist”, ensuring that we advocate for its appropriate use. But a community bolstered by great community engaged practice will inevitably exhibit a healthy sense of respect and humour to both its strengths and faults alike, able to mine their potential and act with apathy to their prejudices.

As we reached about halfway through the evening, it was no surprise to hear each panellist express a feeling of division between Western Sydney and our neighbouring regions in one way or another. Some saw walls, others saw bridges, and above all, each saw these cultural divides as more fabrication than fact. Yet one thing unanimously agreed upon was the lack of balance in funding for the West. In 2015, Western Sydney represented 10% of the Australian population yet only attracted 1% of Commonwealth Government Arts Program funding. Equally distressing is the fact that despite Eastern and Western Sydney each accounting for 30% of the New South Wales population, between 2008 and 2014 Eastern Sydney attracted 87.2% of Arts NSW and Historic House Trust funding while the West received a mere 5.5% [1]. More recently the entire arts community took a sizeable blow as Federal Education Minister Simon Birmingham called the study of creative arts diplomas "lifestyle choices" and hence not warranting funding for 60 diplomas and 57 courses, now ineligible for student loans [2]. As I contemplate these statistics and quietly fume over the fact that Mr Birmingham has likened my chosen profession to a regular morning jog, it becomes even more abundantly apparent that you cannot deprive a sector of support under claims (false ones at that) of its redundancy or incompetence and then seek validation when that sector fails to provide the same standards as its contemporaries. In order to help an underdog you don’t cut one of its legs off as incentive. You give it support and guidance as should be the case with Western Sydney.

In spite of the indispensable role of arts-funding, sought by our dedicated spokespeople, directors, curators, administrators and activists, I also don’t believe we can rely entirely on financial support when thinking about more immediate results. One major strength of Western Sydney artists is our propensity to venture into our sporting clubs, libraries, waterways, shopping malls and community halls as primary source of inspiration and creation. As Mundine remarked, we don’t listen to people who tell us the only place to run is on the field, preferring instead to be on the streets, in the middle of things without needing to be the centre of attention. And it is this fearless tendency to risk the unsavoury, and explore the often unfair, incongruous and just plain unpleasantness of existence with our own brand of humour and playfulness which will continue to sustain our presence in the community and build widespread recognition for the arts.

Hopefully we see more forums like Western Sydney Jam, because the abundance of optimism exhibited in this one evening is only matched by the length of road we are yet to run.

More information about Western Sydney Jam and the podcast for this event is available here.

[1] Are qualifications in trades more worthy than diplomas in dance? http://businesschamber.com.au/Sydney-Business-Chamber/Advocacy/Focus-Western-Sydney/WS-Cultural-Infrastructure-Report_Final, pg 9