We interview the graphic designer behind the recent political poster series of Turnbull, Abbott, Hockey, Bishop and Brandis. 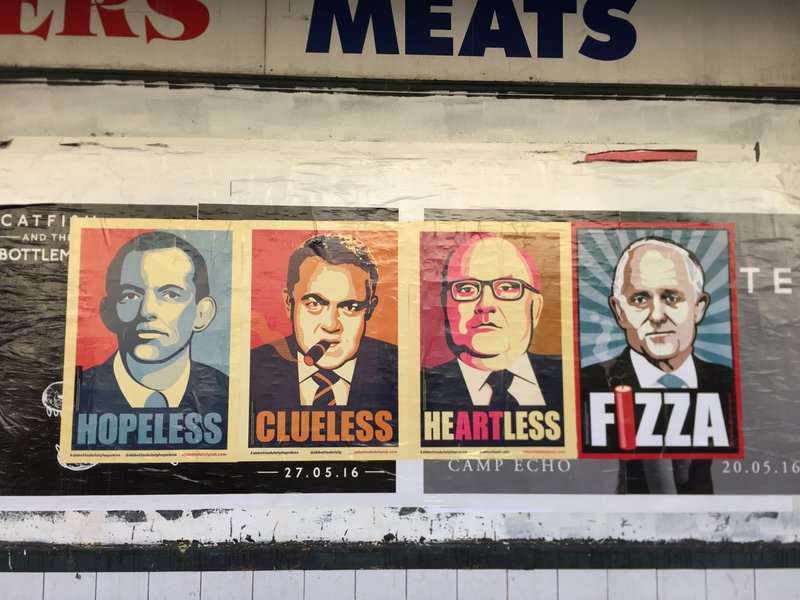 What motivates you to create your work, particularly your most recent series of posters of Turnbull, Abbott, Hockey, Bronwyn Bishop and Brandis?

What motivates much of my work today is a sense of injustice that is prevalent in our society. It seems to be more about the ‘individual’ and less about the ‘community’, and that fuels the great divide between rich and poor, the haves and have nots. So all the posters I’ve created target people who have been influential in perpetuating this injustice. Basically, I’m using my skills to design a poster or a work of art that speaks to as many people as possible.

What has been the public reception to these works? We've heard views have been mixed; some have been congratulatory, others have torn them down, and the Australian Electoral Commission (AEC) had asked you to place a disclaimer on the posters.

I’d say that 90% of people like and appreciate the posters. For me it’s been a deliberate campaign, especially with the recent political posters, not to offend anyone but rather let the message and the visual do the work.

As for the incident with the AEC, had I put the “FIZZA” posters up the day before the election was announced, there wouldn’t have been such a problem. But as soon as the announcement was made, the AEC acquired additional powers to govern the election campaign period. As a result I was advised that I had to place a sticker on all posters stating that I had authorised them as they were now regarded as part of a political campaign. The AEC were very good and gave me time to rectify the problem.

How has the the publicity from these works affected your career as an artist?

I created the ‘Hopeless’ Abbott poster in 2013 while living in Wagga Wagga, but it was when I moved to Sydney a couple of years later and put it up as a billboard that it attracted a lot of publicity and media attention. As a result, our popularity on Facebook went from a handful of followers to over ten and a half thousand people in about a week. At that time I deliberately kept my agency quite separate from my personal work as a political artist. I didn’t want to offend too many people or jeopardize the opportunity to get work from regular clients. As it turned out, a number of individuals and organizations did approach me to do work precisely because of the posters; these clients included the NTEU National Tertiary Education Union and some other political organisations.

Interestingly, our recent FIZZA campaign generated a deal of interest, and as a result we’ve received a lot of commissioned work from clients such as; Getup, the Nature Conservation Council, Greenpeace and a whole lot of other organisations who wanted us to do posters for rallies and marches. There’s not a huge lot of money in it, but it’s helped me to establish myself as an artist who’s interested in protest design. I’m now the sort of go-to guy.

We’ve established ourselves with people like Tanya Plibersek. She really liked the last posters, and she’s also visited my studio to see where it all ‘happens’. After the recent election Tanya said something very true: “Don’t underestimate the power of your posters.” She attributed my posters around the Sydney area as giving any undecided voters an idea about which way to vote. She felt they really helped her cause.

How do you believe the meaning of a work changes once it moves from a private to a public space?

When I moved to Sydney I thought, “I wonder what it would be like if we put the poster and a billboard up in Sydney”. So I paid for the billboard, which meant that I wasn’t asking people to support me in that way. Once I did that, people got on board and gave me a lot of support to put up street posters and another billboard in Melbourne. It’s obvious that my posters were resonating with the public They saw my art as a conduit for their frustrations. Everyone thought that Joe Hockey was clueless; everyone thought that Brandis was heartless; everyone thought that Abbott was hopeless. Here’s a prime minister who gave a knighthood to the Duke of Edinburgh. Enough said!

I do know for a fact that everyone in the Liberal party was aware of the posters and as an artist, that level notoriety is a powerful thing. It was pretty exciting to have my work go up in Sydney and Melbourne simultaneously and then later in Adelaide, Hobart and Perth. I do believe that these posters have been influential and this was confirmed when The National Library of Australia contacted me. They saw the posters as an iconic moment in Australian political history. I don’t think you can get a better accolade than that. Because people will remember that. Sure, I can put things up in an art gallery and that’s great, but it’s a different crowd.

There was a controversy over your exhibition 'No More Lies' back in 2005. Can you talk a bit about the consequences following that exhibition?

I was lecturing at the time at Charles Sturt University and it was part of a staff exhibition. Being an immigrant myself, I felt John Howard, Amanda Vanstone and Phillip Ruddock - prime minister, immigration minister and attorney general - there was a lot of things happening with refugees at the time including the ‘children overboard’ controversy. I felt that they were blatantly lying by making a photo say one thing when it wasn’t. As a result people were self-harming, sewing their lips together. So I did a piece of those three politicians with their lips sewn together. It was part of an exhibition on at the major gallery in Wagga. A visitor from Albury thought it was treasonous. He had really taken offence. He then contacted the office of the prime minister to complain about it, demanding to find out how much funding had come from the federal government for this project, and insisting that the works should come down. So, the story escalated from there. I know for a fact after I’d spoken to the gallery administrator, they were never going to take the works down, but there was stress about the government funding the university and people taking the money and ridiculing the government. It certainly got a lot of popularity and a lot of media interest.