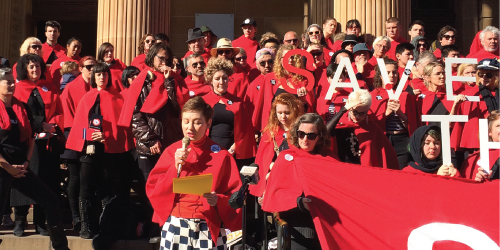 The below is an iteration of a speech written for the save SCA protest on Friday 15th July outside the Art Gallery of NSW. I was invited to deliver this speech by Kath Fries on behalf of The Friends of SCA. This version has been revised from the original speech in collaboration with Shane Haseman.

I studied at SCA as both an undergraduate and post-graduate student. My colleagues, many of whom continue to make work as artists of much note, were also my classmates at SCA.

Last night I was recalling some of this cohort: Mark Shorter, Biljana Jancic, Clare Milledge, Jonny Niesche amongst many others. What struck me about this group was its weirdness. Each artist, including myself, has this sticky-ness, or, sense of resistance in their practice.

Even though I can imagine nothing more different than these four artists and their cultural harvests – Renny Kodger’s giant appendage, Clare’s marsupial sorcery, Biljana's unwavering formal and political discipline, and the smooth, unbroken sheen of Jonny’s surfaces – I can also see something in common.

And the commonality does not stop with my year group

What is this quality?

These artists rejoice in an art where responsibility, recalcitrance, and criticality can co-exist.

Where knowledge is formed in the act of making – in the visual and material thinking that we embark upon as we submerge ourselves in practice.

These practices are the ones produced by the frame of SCA. They are practices that are always political, always informed by context, always social, always historically cogent, always materially resolved, and always willing to fail in their attempt to materialise an idea. Yet the artists are also autonomous and independent thinkers, whose art employs liberal and humanistic strategies, while never eschewing the seductive world of aesthetics.

Without the visual art education SCA provides, Sydney will slump further into cultural oblivion; its mode of cultural production wedged between either the cynical marketing of keywords or the perpetuation of traditional forms geared towards sale in small Australian markets, unaware of the complex global contexts which frame them.

Despite SCA's unorthodox approach to education, or perhaps because of its unorthodoxy, its graduates continue to think laterally and represent a significant slice of intelligent Australian contemporary art.

I think we should all have a long hard think about what we want tertiary art education to be - but schools need to remain open to provide a context for discussing what works and what doesn't.

We do not need more homogeneity in Australia nor the complacency it breeds.

The obliteration of SCA is certainly not conducive to critical and visual thinking in Australia. If the University’s argument is economic, as it appears to be, then it must be said that valuing the arts, and understanding the arts’ intrinsic relationship to any civilized society, can only ever strengthen a brand or commodity. The cultural capital gained by an asset such SCA is priceless in monetary terms. As an alumnus of both the Faculty of Arts and SCA, I am heartbroken to imagine the institution that provided me with so much opportunity to pursue Australian literature, philosophy, performance studies and visual arts, could so blatantly dismiss the significance of its cultural contribution. If the University of Sydney wants to be considered a world class and international institution, then it can not afford to so casually jettison its art school.

Shame on the University of Sydney for its inability to see the cultural asset it has before it, along with its lack of consultation with the student and staff body and alumni community.

We challenge Sydney University to demonstrate a genuine commitment to tertiary art education in Australia in line with the pledge of responsibility they made 25 years ago to act as custodian of this cultural institution. A commitment to the ongoing operation of Sydney College of the Arts would represent an acknowledgement of the value of Visual Arts within both the university context and Australia.

Creativity may be innate, but will remain invisible unless it is fostered. Culture needs the soil of the university.

Apathy abounds in our society, let it not fester within the arts.

Let SCA be the site of difference, criticality, and responsibility, and the complex negotiation of art and citizenship such an environment cultivates.