On the theme of censorship, NAVA asked Scot Cotterell (artist) and John Vella (curator of the ‘Brainstorm’ exhibition for Dark Mofo in Tasmania) to reflect on their experience when Scot’s artwork ‘Shitstorm’ elicited strong reactions from the students and staff of the Tasmanian College of the Arts in Hobart. 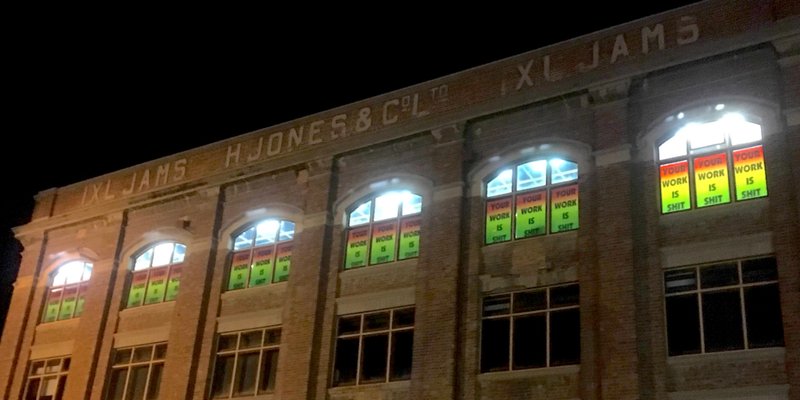 Scot decided to flip around the usual curator-artist interview format and ask questions of John.

SC: Its been 2 months since the installation, rapid removal and relocation of my work in the exhibition entitled Brainstorm you curated for Dark Mofo; your thoughts on the outcomes with hindsight?

JV: From my 3am, June 10 email to you: ‘…The work has undoubtedly had impact and will continue to resonate in the hearts and minds of those who have encountered it, and those who haven’t, as it will be discussed now as something notorious. So we’ll have a form of credibility as a function of that in various contexts, we’ll be derided in others and either way your work will increase in value fiscally, conceptually and emotionally. How fantastic!’

I remain dubious about this being ‘fantastic’; that the ‘victory’ achieved through provocation, impact and a value increase might in fact be hollow. What took pl ace was amazing, disappointing and simultaneously remarkable…

It was morbidly fascinating for me to watch the bubble-up, from 1-2 disgruntled students, to staff complaints, to stakeholders of the art school/university becoming involved in sanitising this work. Can you reflect on this rapid reactive response?

We all have responsibilities and good intentions and then, very ironically, in the shitstorm of all of this we become preoccupied with an arse covering that triggers a chain reaction. Individuals complain, and their supervisors seek to support them, and their managers then ensure they’ve duly addressed the complaints, that the institution also needs to duly address, and then the funding bodies… and we all need to protect ‘the children’…

In the development of the work, as discussed, you underestimated the response from the public/students. Was this naivety or positivity on your part?

The site in question is not just an ‘art school’; it houses students across diverse institutions, levels of study and disciplines. I expected complaints, however I did not expect such high levels of personal outrage given the generic nature of the message. Had your text stated ‘YOUR WORK IS AMAZING’ it would have been derided or ignored, whereas ‘YOUR WORK IS SHIT’ was taken as a personal attack. This reaction stands as testament to a contemporary crisis of sorts that manifests as a form of hypersensitivity. There are multiple forums for ‘outrage’ however outrage is rarely expressed in response to immature or reactionary opinions. Not everyone who puts their hand up is worth listening to.

You had some notion that the signs looming above the viewer on the building facade were kind of like ‘the voice of god’. Given I’ve based the signage backgrounds on those produced by an abhorrent manifestation of American evangelical Christianity, there is a link here to judgment especially as the work cuts at one’s self-belief. Whaddya reckon?

I am an optimist at heart (and a very lapsed Catholic), however, the work of the world – of politics, of poverty, of power, of environment and ironically of religion – right now, is predominately shit, so I wouldn’t blame God for pointing that out.

When your work was relocated from the building facade to the gallery (with appropriate signage of course) the voice of ‘God’ was significantly distilled. However, my faith (in humanity) was restored, as I witnessed parents photographing their children in front of your work, feigning humiliation. This manifested an alchemy of sorts... the transmutation of shit into gold via Facebook and Instagram.

A kind of lame alchemy really, but one via a super-contemporary medium that currently occupies an enormous perceptual wealth cache. It’s like ‘Shitstorm’ worked much better in the internet than in the world.