DAAF was held 11-13 August and showcased the work of over 50 art centres from across Australia. Executive Director, Claire Summers, shares the highlights of this year’s fair. 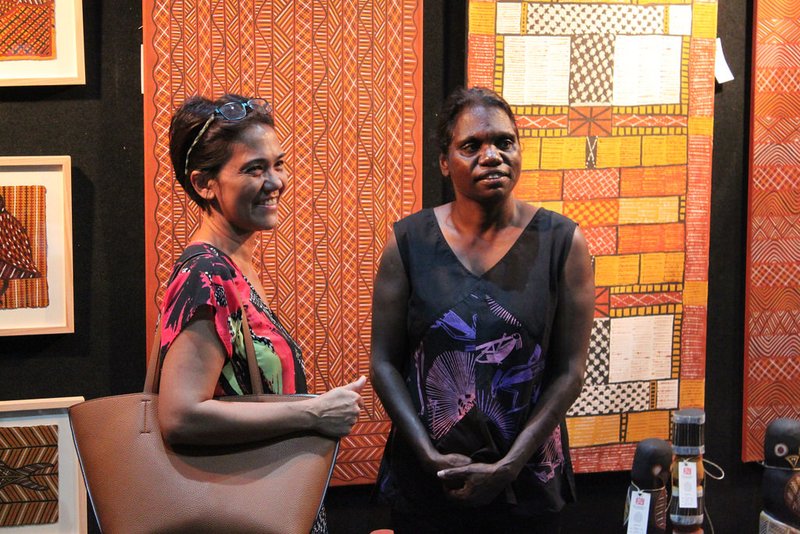 DAAF was originally conceived and designed to complement the National Aboriginal and Torres Strait Islander Art Awards (Telstra NATSIAA) to bridge the tyranny of distance, and connect the Indigneous art industry with artists and arts workers who live in some of the most remote regions of the country. DAAF has also formed close partnerships with the National Indigenous Music Awards and the Garma Festival. Together, these four prestigious events mark the most significant national celebration of Aboriginal and Torres Strait Islander arts in the world.

In 2012, the Darwin Aboriginal Art Fair Foundation (DAAFF) was established to ensure that the fair was owned and operated by the Indigenous Art Centres it represents. The foundation’s vision is to provide vibrant and exciting platforms for Aboriginal and Torres Strait Islander art and culture, with a reputation for innovation, diversity and cultural integrity.

The 2017 event delivered just that! DAAFF was delighted to invite the Director of the National Gallery of Australia, Gerard Vaughan, to officially open the event. In additional to the visual spectacular of the 67 participating Art Centres’ exhibition booths, the 11th Darwin Aboriginal Art Fair presented an incredible public program. Visitors partook in twelve artist workshops, four traditional dance performances, and a children’s activity station which included a screening of the popular cartoon Little J and Big Cuz, starring Deborah Mailman and Miranda Tapsell. A stunning display of the skirts from Iltja Ntjarra Many Hands Art Centre (that was part of the 2016 “Parrtjima - A Festival in Light” in Alice Springs) lit up the exhibition halls. DAAFF was also honoured to exhibit the “Uluru Statement – From the Heart” and invited visitors, artists and arts workers alike to show their support.

In response to the demand from its Art Centre membership, the foundation extended its repertoire of activities in 2016 (as part of DAAF’s 10th Anniversary celebrations) to include a film gala, fashion show and panel discussion. From Country to Couture – DAAFF 2017 Fashion Show was a sell-out event, involving textile and jewellery designs from 14 different Art Centres! The panel discussion was facilitated by the Senior Curator of Aboriginal and Torres Strait Islander Art at the National Gallery of Australia, Franchesca Cubillo, and panellists Marcia Langton AM, Djon Mundine OAM, Gail Mabo and Mervyn Street discussed the 1967 Referendum, and how art has played a role in Indigenous politics. DAAFF was proud to present the Northern Territory launch of “Namatjira Project” in partnership with BIGhART at is film gala evening. It was an honour to host a discussion after the film with Lenie and Kevin Namatjira, the grandchildren of Albert Namatjira.

DAAFF’s events help visitors, artists, arts workers and buyers to truly connect and learn from each other. By using vibrant and exciting art forms as a conduit, these innovative platforms are where both ancient and contemporary stories can be exchanged, and shared with the world.