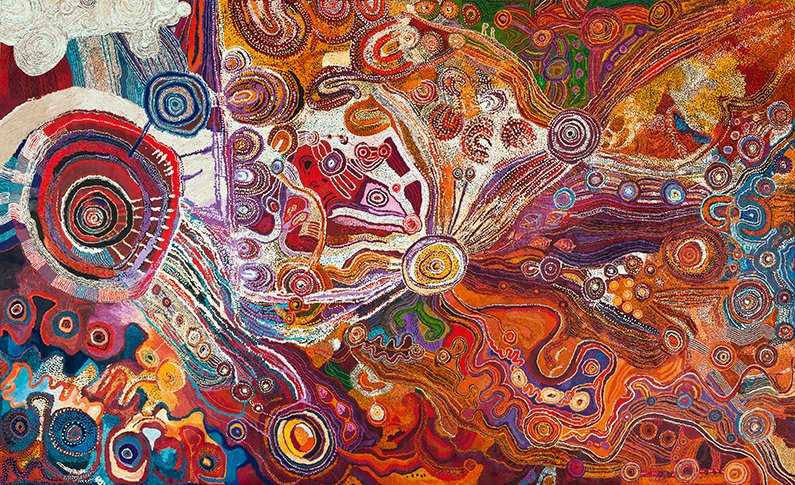 The inaugural Tarnanthi Festival of Aboriginal and Torres Strait Islander Art was first presented in 2015. Can you talk about how the festival was established?

The Festival was the brainchild of the Premier who saw an opportunity in the Festival state to honour Aboriginal and Torres Strait Islander art and culture.

Tarnanthi 2017 encompasses a major exhibition at the Art Gallery of South Australia, an art fair and a city-wide festival, and features 50 new commissions. What are your highlights from this year's festival?

There are many many highlights and I can’t wait to experience all of the partner exhibitions. The highlights at the Art Gallery include the next iteration of Kulata Tjuta which included 550 spears made by men across the APY Lands. This project has been in development for years with communities working across generations and across communities to keep culture strong and to acknowledge the atrocities of the past.

As Tarnanthi's Artistic Director can you talk about your vision for the 2017 festival?

We could say that this year’s vision is less about ‘seeing’ and more about listening. The word ‘kulila’ means to listen in several desert languages and it is a word that is used as a title and written across works of art in the exhibition. It is a powerful plea for us all to listen, deeply and with open hearts and minds, to Aboriginal and Torres Strait Islander people.

This festival brings together over 1,000 artists and collectives from across the country, from cities and regional towns, as well as artists living and working in communities and art centres. How do you believe Tarnanthi will create a public dialogue in South Australia about the diversity of First Nation art and culture?

Unfolding on such a scale, surely it cant avoid engendering public dialogue! With so many partners and collaborators TARNANTHI, we hope, will reach into homes and hearts across the state.

Tarnanthi has state government and private support to continue annually until 2021. How do you think the festival will evolve as a platform for contemporary Aboriginal and Torres Strait Islander stories over the next five years?

I can’t predict that and it’s not my role to do so. It will be very exciting to see how artists respond after this year. In many ways this year’s exhibition is a mark of the ambition amplified from 2015.

TARNANTHI at the Gallery will showcase the work of Dean Cross, recipient of a NSW Artists' Grant 2017 supported by Create NSW and administered by NAVA.