We chat to Melbourne-based artist and activist Van T Rudd about his murals, free speech and how he challenges the status quo. 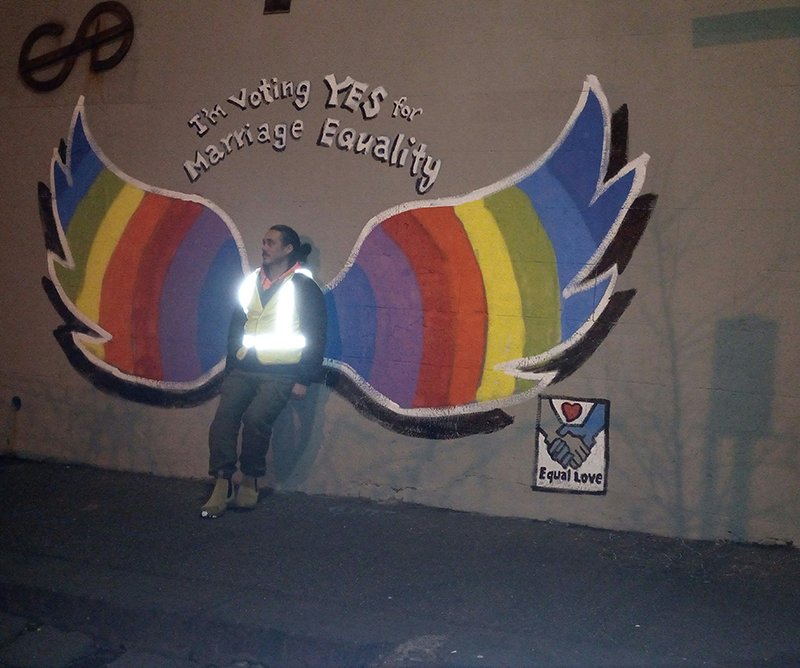 You recently painted a pro-marriage equality mural in Fitzroy which was vandalised, what has happened to the work since, has Yarra council removed the text?

Yes, the mural had the words 'hetero pride' scribbled over the top. Also, one that I'd done previous to that in Collingwood had the word 'NO' written over the top. People have been restoring them to the original versions, which is great! As far as I know, Yarra Council has shown verbal support, but are expecting that artists and activists will just do all the work in restoring them and finding new mural locations.

This isn’t the first time a work of yours has been defaced. Do you see vandalism of your work as a form of censorship? What’s your response when it happens?

I've had quite a number of my artworks defaced and/or censored. If you're doing art on the streets, you've got to get used to the defacement or destruction of your work because that's the nature of a more open space that many artists use. When it comes to vandalism and censorship, there's clearly a differentiation between the two terms, yet they are interrelated through the prism of economics. If an artwork is vandalised, it directly concerns the nature of property as prescribed by capitalism, which is the predominance of private property in virtually all spheres of life. So when an object is vandalised, it means there is a veritable attack upon the privatised nature of it, whether that is a wall, a building, a statue. I think the word vandalism tends to cloud the already confusing interplay of political forces. It's the word of choice for the wealthy, property owning side of politics. In fact, they don't see that when they use their powerful economic means to make graffiti art illegal (local councils are great at this), they're censoring free speech - silencing the voices of those with least of economic power. So censorship is different to vandalism. Censorship is what happens when the wealthy ruling class exerts their economic and political power over the poor.

In terms of my response to the defacement and/or censorship of my work, I respond quite strategically to each of them. If a street artwork has been marked over by another artist, I don't tend to be concerned, and I'll probably rework the piece at a later date. If it's been censored as per my definition above, then I usually respond by making sure the media knows about it so it reaches as many people as possible can see when free speech is attacked.

Murals often work to engage politics and create dialogue in communities, why is it important for work to be out of a gallery space and shown in public space?

To me art comes alive in public domains, whether that's on social media or in the streets. I've nothing against art in galleries, except for the fact that it's generally very difficult to get people to your exhibitions. Art in public involves people who may never go to a gallery, yet may be totally up-to-date with politics or their work place struggles against their bosses. Your art may be very confronting to some people and not to others. The point is, it is not sheltering people from the discussion and debate, and you're not sheltering yourself from criticism and censorship either.

I believe it democratises art, and as an artist you can't hide behind too much post-post-modernist theoretical claptrap.

Why do you think it’s important for artists to challenge the status quo and how do you select which issues to speak out about through your work?
Artists are not a special group of people separate from society. We're similarly being stuffed by the elites like the rest of the population. While I think it's important for artists to challenge the system, I understand that artists also need money to survive. So I don't criticise artists for making money through art, creating run-of-the-mill stuff. I also understand that artists need to take casual jobs on the side to support their work if they do decide to make openly political work. This is no doubt getting harder for so many artists, so I feel that strong, robust, political art is harder to come by. I'm also of the opinion that artists can challenge the system without their art, but via their work places (through unions) or other parts of their lives. I know of many artists who can organise radical protests really well and draw thousands of people to them. It is way more effective in challenging the system than their art.

You’ve also created some political murals for unions which they’ve used at rallies, what’s been the reaction to these on both sides?

This is a good question and indeed a rare one in the art world. Political murals for the unions is a very interesting and deeply historical and relevant endeavour. It's an area of art and culture that has created waves for so long and so deep politically, it is sad to see its retreat over the years. This is the art that the establishment is most afraid of. If you do a public mural (as an individual) that satirises a major corporation such as Exxon, you could probably get away with it or may even get censored. But if you do it with the solidarity and backing of a large union, the battle lines are quickly drawn. The workers and the union representatives show great support for your work because it is barracking for their side against wage cuts or worsening conditions. However, in doing so, you're entering a fierce class battle against the bosses. You find out fairly quickly that the only way for your art to be shown in public, is if those workers help you out (for example, they may help you build a mural wall at a picket line). The company bosses and the broader establishment including the art world (company directors are usually associated with the contemporary art scene) will make sure your work is never published in commercial environments.

This is an area of art that is most intensely political, and you find out that just about every cultural body, media company, corporation, local/federal governments is against you because you're associated with striking workers, because striking workers are the biggest threat to the functioning of capitalism.

Where do you plan to take your work next?

I have a number of artworks on the horizon. I'll be doing more murals for radical trade unions and their worker members and more murals on Equal Marriage and more of my #TrumpTank works. I've got a few children's picture books being produced and I will be extending upon the internationally notorious #RichForks displays which are luxury dinner forks stolen from the elites while they're at their extravagant dinners.