Q&A with the Artists' Committee

The Artists’ Committee is an informal association of artists and arts workers that makes collaborative public work around the intersection of money, ethics and culture. 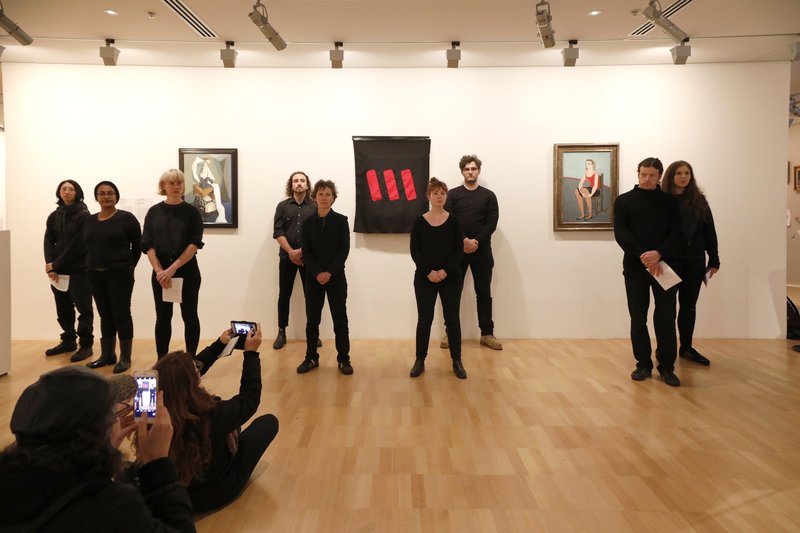 Performative intervention at the National Gallery of Victoria in protest against their support of the immigration detention industry through their contract with Wilson Security. Photo: Tatjana Plitt

In 2017 the Artists’ Committee commenced a project that examines and highlights the National Gallery of Victoria’s connection with the immigration detention industry through its contract with Wilson Security - the company that provides security on Australia’s offshore detention centres for asylum seekers on Manus Island and Nauru. This project aims to end NGV’s commercial partnership with Wilson Security through a series of unsanctioned performative interventions. We caught up with the artists to discuss commercial ethics and the important role that art and artists play to make change.

Q: Reading the Artist Committees' Ethics Charter, it comes across as such a clear account of the foundational values for any cultural institution. For example, "Enacted understanding of the difference between commercial products and artistic output, i.e. the cultural value of original creative work versus the market value of brands such as General Motors/Holden, Bulgari or Dior." Have public perceptions of cultural vs market value collapsed into the same thing?

A: Every day advertising takes up our space and our time. To a large degree, we tolerate this. We go to public galleries to learn, to be inspired and challenged, to experience and to relax. We are open there.

It goes without saying that large corporations will pay big money to occupy these spaces. And to attract funding, cultural institutions will find all sorts of ways to package up and sell off bits and pieces. Corporations pay to sit on the board, for gallery naming rights, to own public programs and park their cars out the front of a reputable state gallery. The encroachment of corporate influence has even seeped into the exhibition program itself, the NGV holding blockbuster one-brand exhibitions such as House of Dior or Shifting Gear (an exhibition sponsored by Holden in which the brand name is mentioned 53 times in the wall labels).

Their presence turns the art museum spaces into product showrooms. When the gallery’s imperatives revolve around these corporate money-spinners, how can real curatorial vision compete for time, space and funding? How much state funded effort is expended by gallery leadership nurturing these high-end commercial relationships, disguising it as cultural content? Art has a crucial role to play in the creation of meaning in a society, in the telling of stories and the creation of identity of a place. What does it say about Victoria when our public art gallery repeatedly sells us vacuous fantasies realised only through consumption, masquerading as revolutionary?

This kind of approach, for which the NGV has received a lot of criticism since Tony Elwood's appointment, confirms the institution's continued prioritisation of its existing, privileged audiences and the upholding of elite cultural and financial interests. These spectacle exhibitions will undoubtedly have long-term impact on the public and widespread ideas of what constitutes art, in effect diluting socio-political potential and becoming increasingly indiscernible from the advertising they exist to support.

Public perception is not always attuned to the stealthy ways in which commercial arrangements can influence the curation of culture. Walk into the Rio Tinto sponsored Melbourne Museum, for example. A locomotive brimming with coal welcomes children into the new state-of-the-art children’s wing. A Rio Tinto/ABC co-production tells visitors that the “mining industry is essential… there’s no other way.” The Rio Tinto Dynamic Earth exhibit displays a convenient disregard for the effects, or indeed the existence, of human-induced climate change, while celebrating the mining industry and its indispensability. As blatant as it sounds in writing, to young minds, this bias can easily go unnoticed and unchallenged.

Likewise, the NGV has enjoyed a close relationship with the mining industry, allowing its board to be peopled with all facets of its operation: infrastructure, construction, legal and financial, and its collection to be stocked up with the rewards. Behind the scenes, big business is using our public cultural institutions as a reputable extension of their offices, leaching off the integrity that their very presence diminishes.

Q: How do you see the role of the public cultural institution in resisting that collapse?

A: Most arts workers in the institution work under precarity and so have little space to criticise management. The public cultural institution needs to recognise this, enforce more sustainable employment practices to become more responsible for their workers.

Further they must develop and adhere to criteria around the social and environmental impact of the Gallery’s supply chain through commercial contracts and sponsorship to avoid such morally compromised commercial arrangements such as the one with Wilson Security.

Practices in representational diversity must not be tokenistic. The institution must refuse to commodify ethnicity and racialised experiences for white audiences by including Indigenous people and PoC in decision-making processes for programming and hiring practices.

These are initial suggestions—there’s a lot more that these institutions can do to be self-reflexive about their structural power in a white neoliberal capitalist patriarchal society.

These are things that should be initiated by the institution but it’s clear that, for any change to occur, the art community must consistently hold the institution to account. Artists and art workers, depending on their context and upbringing, need to be cognisant of their social capital, platform, and the fact that these institutions are reliant on their creativity.

Q: There’s been a bit of talk about the need for artists to unionise in the last couple of years, not only to secure industrial fairness for artists, but to strengthen a collective voice for social action and change. What are your thoughts?

A: As a matter of routine, artists are undercut. We are so accustomed to it, we even undercut ourselves, and in turn we undercut each other. Many of us are familiar with the scenario. This cycle of exploitation affects intersections of people to different degrees and in different ways.

Artists in Australia are often too happy to keep our heads down, ignoring inconvenient, uncomfortable or difficult facts—especially when speaking up might cost us our reputation, future opportunities or professional relationships. With closer ties to our collectivity, this might change. Issues such as gender inequality, lack of diversity, dodgy sponsorship, unethical commercial arrangements or increasing cuts to the arts are often regarded as issues out of our control and beside the point. Rather than becoming more collectively outraged, we take funding cuts as a blow, and steel ourselves to become ever more competitive. Instead, the federal government’s attacks on our industry must be connected to the swift erosion of all public service industries: cuts to education, to Medicare, to welfare. These industries, like the arts, are crucial to a healthy society.

A union would help us resist further decimation of what we take for granted: public funding for the arts, the integrity of our institutions and the quality of our art schools, for example.

What has prevented the visual arts from establishing a union thus far? The film & TV and theatre sectors provide good models. In the visual arts in Australia, we have plenty of existing codes of practice, ethics charters, guidelines and standards to work by, but no authority to enforce them.

Q: NAVA are currently calling for artists to join us in building a critical mass of advocacy for the arts during the first sitting week of Parliament – setting a confident national agenda that’s led by artists. What do you think should be on the national agenda this year? What’s most pressing right now? And how can we inform Parliament’s first sitting week with artists’ passions, concerns and bold expectations?

A: In 1986 The Weeping Woman was stolen from the National Gallery of Victoria. The infamous painting by Picasso was held to ransom by a group that called itself the Australian Cultural Terrorists. Their demand: a ten percent increase in state arts funding, an independent inquiry into Victoria’s budget and spending for the arts, and the establishment of an annual art prize available to artists under 30.

To continue to thrive in the long term, not only do we need to remedy the assault on the small to medium sector made in the 2015 federal budget, ensure minimum targets of diversity across staffing, governance and programming in cultural institutions, work to legislate standardised artists’ rates, build on new transparency measures introduced by the Australia Council and protect arms-length funding models, but we need to find clever, creative ways to make our concerns heard.