With the federal election coming up on Saturday 18 May, NAVA is calling on all parties to Invest in Artistic Courage. 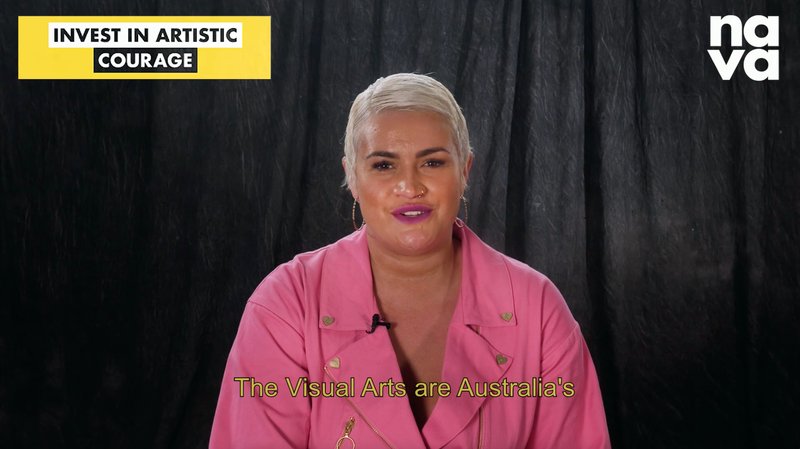 Investing in Artistic Courage means a lot of things.

The courage to make a commitment to a practice that’s rigorous, disciplined, and deeply connected to the most unsettling and invigorating aspects of how you think and what you feel.

The courage to sustain a creative career along life’s unexpected twists and turns.

The courage to persevere with your work in a political climate that doesn’t reflect the culture that the arts community is devoted to cherishing and championing.

This is what you do.

And this is why NAVA does what we do.

To make sure that Australia can defy the troubling trends in artists’ incomes, career prospects and fair pay, NAVA has released a set of national policy priorities, and recently we put them to the test at a national forum.

Our Monash University collaboration Australian Cultural Policy: The Next Decade offered timely policy direction to strengthen our creative culture and our democracy, which emerged as a key theme of the day’s discussion. Gabi Gabi / Kabi Kabi and Wiradjuri artist and academic Dr Bianca Beetson led the day’s thinking with her keynote which is the NAVA Podcast this month.We heard the policy priorities of Shadow Minister for the Arts Tony Burke, while unfortunately Minister for the Arts Mitch Fifield was unable to attend and did not send a video statement. The comprehensive Australia-wide sector representation included First Nations arts, architecture and planning, artist-run initiatives, broadcasting, contemporary arts, disability, games, libraries, literature, live music, museums and galleries, performing arts and screen, as well as academics, industry peak bodies, philanthropy, think tanks and unions. Government attendees were from the departments of Communications and the Arts, Foreign Affairs and Trade, and Disability, as well as several local and state governments. Each session is now available as a podcast and we’re already discussing future events.

Arts Access Australia is advocating for #RealMoneyRealJobs, calling on all parties to close the disability pay gap. It’s a gap that’s grown alarmingly: while artists with disability currently earn 42% less than artists without disability, back in 2008 that gap was only 9%. Read more here.

Expert national policy priorities beyond the arts are being offered by a range of think tanks and policy bodies, with integrity and fair pay common to all. The comprehensive approach of the Grattan Institute is set out in their  Orange Book, continuing their work on the crisis of trust in politics. The Australia Institute’s work on Australia’s wages crisis warns against making overly-optimistic projections that have never eventuated, advising caution. The McKell Institute is also looking at endemic underpayment which affects artists’ creative and non-creative incomes.

Across and beyond the arts, we see strong national consensus for policies that strengthen Australia’s democracy by investing in our most courageous thinkers and makers.

Against a political environment that’s increasingly hostile to cultural institutions, public broadcasting and the independent arts, there’s no time to be lost in making the very most of that consensus.

The Australian Electoral Commission has recently announced that a record number of people are on the electoral roll right now – not only more people than ever before, but the highest ever proportion: “an extraordinary 96.8%... something all Australians can be proud of.” Even youth enrolment is at its highest ever. It’s a clear indicator of how much Australians value our public institutions, and how ready we are for our voices to be heard.

To make sure that that consensus translates into meaningful change, it’s time to act.

Here’s our handy guide on how to use the NAVA Advocacy Toolkit– and look out for events near you! (Let us know if you’re keen to host one!)

Whether your advocacy level is social, activist or citizen, now’s the time. An investment in artistic courage is a vision for Australia’s future. What’s your vision?

In the lead up to the Federal Election, Bek Conroy facilitated a conversation about redesigning the world, 9 May 2019 at 107 Projects Redfern NSW.