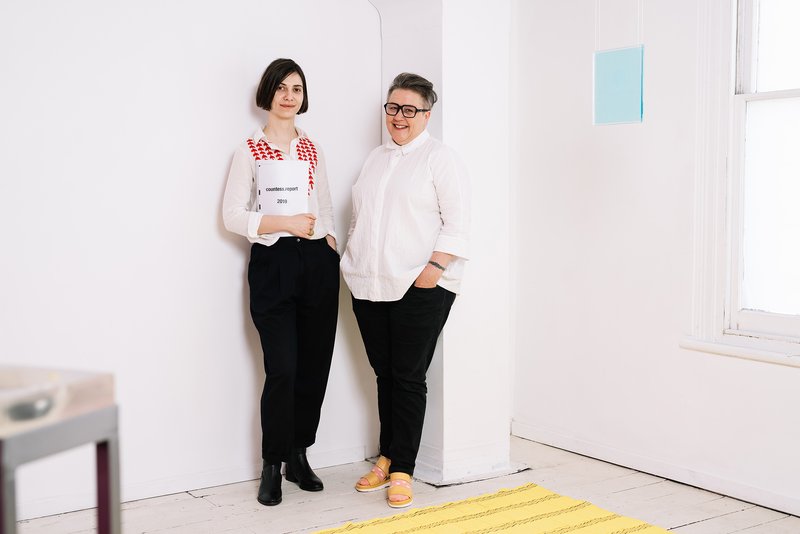 The latest Countess Report, Australia’s premier reference point on gender representation in the contemporary visual arts, has been released today.

A total of over 13,000 artists across 184 organisations were counted.

The Report’s highlights include:

“Since the release of the inaugural Countess Report in 2016, the Countess Collective has evolved as artists and activists” the Countess Report says. “Our aim in the release of these updated figures is to critically observe the changes in gender representation across the Australian art sector. We intend for these statistics to keep conversations around gender, power and value front of mind at art galleries, museums, art fairs and biennales across the nation.”

The statistics can be understood within expanded Countess activities which include a new online platform that features essays and resources, as well as artworks. In this context, the data asks questions of labour, counting, intersectional feminism and issues of representation.

The Report has been complied by The Countess Report with data collected by a team of counters from across Australia. Counters worked with an emphasis on using primary sources, such as artists websites, to ensure direct evidence and authoritative information and could correctly record gender.

A considered approach has been taken to the counting of non-binary artists, and, like all aspects of the report, this approach is open to critique and improvement so as to prevent misuse of out-of-date or inaccurate information.

The Countess Report is funded by the Sheila Foundation Ltd (formerly Cruthers Art Foundation), and backed by the National Association for the Visual Arts (NAVA).

“However, the research as revealed in the report focuses public attention on the pressing need for state-owned collections and institutions to match the progress made by the independent sector to redress the gender imbalance in collecting and promoting the work of women artists.

“Our state and national institutions are often where we begin learning as children about Australian art and, as these spaces engage closely with our schools and increasingly large audiences, it’s crucial they tell the whole story.

“The latest results will allow Sheila to focus on areas still requiring work, and develop programs and campaigns for them. Gender parity across the sector is within sight and we call on everyone in contemporary art to work together to achieve it within the next four years.”

“I’ve participated in a count workshop and seen first-hand the rigour with which the Countess Collective approach data collection and triangulate the verification of gender identity. This dedication by counters all over Australia yields much-needed benchmarking that allows all of us to be open about doing better.

“I applaud the forthcoming partnership between the Countess and the National Gallery of Australia as part of Know My Name, the NGA’s nationwide campaign that celebrates the contributions of Australian women artists. Importantly, the NGA have provided their own data to The Countess Report as part of this partnership, and I look forward to seeing the further analysis and creative response to the NGA data that the Countess has planned for 2020.

About The Countess Report

First released in 2016 with data collected from national exhibitions in 2014, the 2016 Countess Report presented research that has become indispensable to the contemporary visual arts sector. The release of the 2019 report continues to situate Countess as the premier data reference point for understanding and redressing gender inequity in the Australian arts sector. Since 2017 countess.report has been a collaborative project of Amy Prcevich, Elvis Richardson and Miranda Samuels.

Sheila Foundation Ltd is a national public foundation that addresses the historical and continuing gender bias against women in Australian art. It assists and celebrates contemporary women artists,  aims to paint Australian women artists back into our history, and supports the unique Cruthers Collection of Women’s Art at the University of Western Australia. Comprising over 700 works, it is Australia’s largest stand-alone collection of women’s art and has been described as “a tremendous resource for the rethinking of Australian art”. Sheila Foundation is named in honour of Lady Sheila Cruthers who spent much of her life supporting and advocating for women artists.

The National Association for the Visual Arts (NAVA) leads advocacy, policy and action for a contemporary Australian arts sector that’s ambitious and fair. Through the Code of Practice for the Professional Australian Visual Arts, Craft and Design Sector, NAVA sets best practice standards for the industry. Key to NAVA’s policy priorities is that gender disparities in fees, opportunities and representation are overcome through policy and regulation, and that all relevant government departments collect demographic information that allow for strategic program planning that addresses LGBTQIA* artists. NAVA’s recent policy work in this field has included releasing the Anonymous “Speak Up” Protocol: A Guide for Boards on how to respond to anonymous complaints of gendered harassment, and supporting CLEAR EXPECTATIONS: Guidelines for institutions, galleries and curators working with trans, non-binary and gender diverse artists in Australia, released earlier this year.