Image: Esther Anatolitis presenting at In these critical times. Photo by Daniel Gardeazabal, 2019. 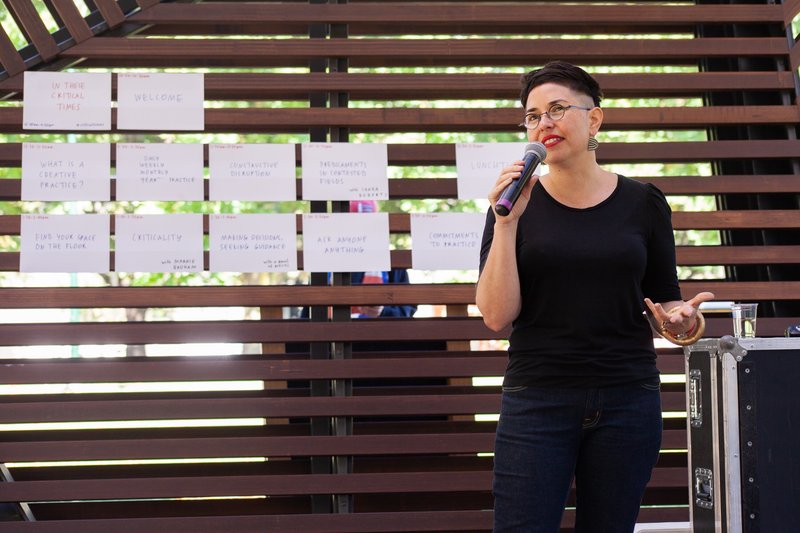 Image description: Esther with short black hair, wearing black glasses, a black crew neck t-shirt, denim jeans and a gold bracelet, mid-sentence speaking into a microphone and looking slightly upwards. Standing in front of a wooden lattice with A4 sheets of paper taped to it with words written on them in blue and red markers.

And yet last week’s announcements by Treasurer Josh Frydenberg reveal a curious reluctance to pursue the most effective means to recovery.

In April, internationally renowned epidemiologist Dr Michael Osterholm was asked by  7.30’s Leigh Sales what governments most needed to deploy in order to respond to the challenges posed by the pandemic. His immediate response: “creative imagination”.

Which makes right now a critical time to invest in creative expertise.

We’ve heard a great deal during this crisis about the central importance of the arts industry to the Australian economy.

We know that creative experiences inspire 98% of all Australians.

We know that, for every million dollars in turnover, the arts and entertainment sector creates 9 jobs, as opposed to just 1 in mining or 0.36 in oil and gas extraction.

We know that tourism and hospitality rely on arts and culture for their own success, especially in regional areas. And we know that arts tourists are high value tourists: they travel further, stay longer and spend more than domestic tourists overall.

We also know that the arts was the first and worst hit industry, and the one that will take the longest to recover.

So how can we power the creative sector to drive Australia’s recovery?

Let’s start with JobKeeper and JobSeeker. The arts industry has been calling for their extension for months now, and it’s important to see that extension implemented. But the payment reduction is precipitous, and the job seeking expectation unrealistic. The arts sector has experienced alarming drops in payroll job numbers, and has a high rate of casualisation.

According to the ABS, 33.9 per cent of casual employees in Arts and Recreation Services have been with their current employer for less than 12 months – and more than 12 months employment is a requisite for JobKeeper. Despite consistent industry calls, nothing has been done to make JobKeeper accessible to more casual workers.

Artists may have invented the gig economy and the portfolio career – but they didn’t master more agile ways of working to have that co-opted into workplace flexibilities that exploit casualisation and dismiss expertise.

And when we add to this the compounding effects of massive fee hikes for arts and humanities courses, we see a concerning move away from supporting the pathways that nurture the creative thinking needed to rescue us from this prolonged crisis.

What’s the number one skillset needed for the workforce and economy of the future? A wealth of global research, from the World Economic Forum to PWC, Deloitte, McKinsey, NESTA, Harvard, and even the Australian Government’s Bureau of Communications and Arts Research agree: it’s creativity.

Why have we been so unprepared to deal with COVID-19’s challenges? Because “we really lack creative imagination”, Osterholm told Sales. Despite repeated warnings, he continued, we’re told by politicians that “no one could have envisioned – or so they say – all the constellation of things that have happened here: not just a virus crossing from an animal to a human, but the worldwide transmission, the impact that it has on healthcare, the fact that it also shuts down our global economy.”

It’s also, of course, the fundamental skillset of the artist.

The commitments made to date by the Australian government of a $160m rescue package for the arts have been welcomed by the industry. It’s a great start alongside JobKeeper, which has allowed a great many organisations to maintain relationships with expert staff at this critical time.

However, that package only addresses some artform sectors and is focused on the creation and touring of new work, as opposed to supporting artists and the industry to survive and thrive through this crisis.

Victorian galleries, museums, studios and other venues have just been through the expensive turmoil of closing, opening and closing again, and as with other states, the Victorian government has offered targeted package after package to support the industry.

What’s needed now is an ambitious national vision that invests in arts and culture comprehensively and empowers its professional pathways. And that means investing in creative education, arts tourism, the creative industry across all artforms and scales, and creative workers no matter where and how they’re employed. Because we need their thinking, we need their inspiration and we need their boost to our economy.

As the Victorian experience demonstrates, the path to recovery will not be a linear one. Let’s test our assumptions, reset our expectations, and fire up our creative imagination.

It’s time to think adventurously about the Australia we’d like to see emerge from this crisis.

This article first appeared in The Guardian on 28 July 2020 as We need to stop punishing artists: their creative thinking will help us out of this crisis.