The statement requests that the Australian Government take immediate humanitarian actions to protect vulnerable Afghan people and their immense contribution to world cultures and heritages. 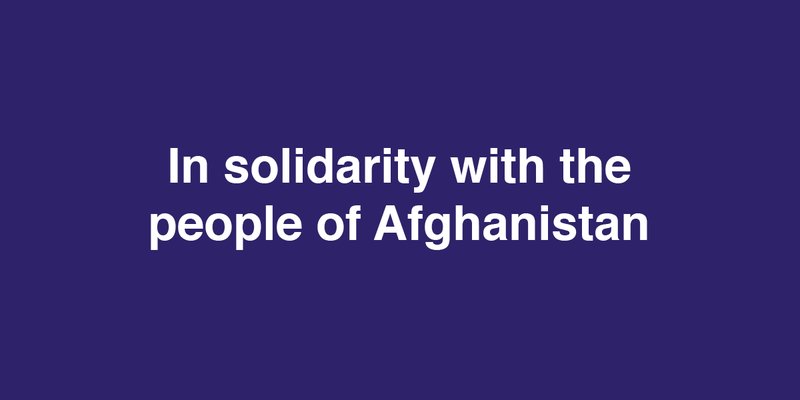 A small group of creative and cultural workers from the Afghan diaspora in Australia have penned an urgent call to action to the Australian Government to protect and facilitate targeted humanitarian aid to groups whose lives and civil freedoms are at risk under an oppressive Taliban regime.

NAVA, in solidarity with the people of Afghanistan, offers this statement to the creative and cultural industries to read and sign. The statement requests that the Australian Government increase and extend its humanitarian support to the artists, artisans, scholars, writers, and marginalised groups whose lives and creative expression cannot continue under this violent takeover of the country.

Please sign and share this statement of solidarity widely to your networks. Every small action counts at this critical time for the people of Afghanistan.

We will collate all signatures by 28 August and deliver the letter to the Minister for Communications, Urban Infrastructure, Cities and the Arts, Hon Paul Fletcher MP, Minister for Foreign Affairs, Hon Marise Payne MP, Minister for Immigration, Citizenship, Migrant Services and Multicultural Affairs of Australia, Hon Alex Hawke MP.

From:
The undersigned individuals, organisations and collectives of the Australian creative and cultural sector.

Re: Protection for Afghan artists, artisans, scholars and writers in Afghanistan and Australia.

On 15 August 2021, we watched in horror as the Taliban forcibly and illegally declared themselves the ruling body of Afghanistan. A return to the Taliban regime will have devastating and longstanding impacts for the people and the cultures of Afghanistan.

As the Taliban look to legitimise authority in the country, key minority groups are once again at extreme risk in an increasingly destablised and oppressive environment. For years the Taliban has targeted women and people from multiple marginalised communities including artists, artisans, scholars and writers, particularly from the Hazara minority group, LGBTQIA+ identities and people with disability.

The Taliban propagated an extremist monocultural ruling ideology and pose a severe threat to the diversity of cultural expressions that has been at the core of Afghanistan for generations. Their inhumane rule and continued presence focused on culturally and materially erasing the diversity and vitality of Afghan cultures. The Taliban destroyed and looted museums and galleries, libraries, universities, destroyed historical and cultural landmarks by force, banned music and silenced diversity of thought. All forms of creative and cultural expression vanished, disrupting the maintenance and sharing of Afghan cultures.

Despite this perilous environment, a new generation of Afghan artists and creatives has risen, and it is within the responsibility and capacity of the Australian Government to ensure their lives are protected. We don’t want to see the gains made during Australia’s two-decade long commitment to Afghanistan be inconsequential.

We acknowledge and value that Australia is home to the oldest living cultures on the planet, and its continued multicultural fabric has ensured that all Australians benefit from a pluralistic way of life. The priorities outlined in this letter seek to protect, preserve and sustain Afghan cultures by protecting the artists, artisans, scholars and writers in Afghanistan and those seeking asylum in Australia.

To acknowledge and justify the intent by Australia and other countries to build a more secure and democratic Afghanistan, we urge the following immediate humanitarian actions by the Australian Government:

We, the undersigned, Australian individuals and organisations that contribute to the vibrant cultural fabric of Australia, request these actions be immediately taken to protect vulnerable Afghan people and their immense contribution to world cultures and heritages.

We stand in solidarity with the people of Afghanistan.

This statement will be sent to the addressed Ministers on Monday 30 August 2021.

The ramifications of the Taliban regime for the people of Afghanistan are devastating and evolving hourly. Every action, small or large counts.

We acknowledge the impacts of the COVID-19 pandemic on the arts community and specifically artists.
If you are able to, please consider extending a donation to the following charities currently active and delivering humanitarian support to people in Afghanistan.
www.womenforafghanwomen.org
crisis-in-afghanistan.raisely.com/ben-quilty

We acknowledge Aboriginal and Torres Strait Islander peoples and their rich continuing cultures of the continent we now call Australia. We pay respect to Elders past and present. We acknowledge Aboriginal and Torres Straight Islander peoples as Australia’s First Peoples and as the Traditional Owners and Custodians of the lands and waters that surround us.