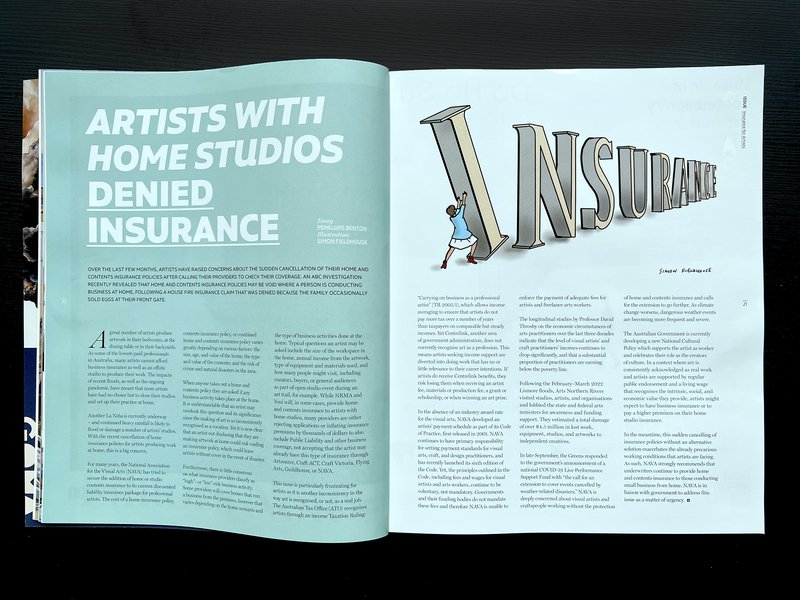 Over the last few months, artists have raised concerns about the sudden cancellation of their home and contents insurance policies after calling their providers to check their coverage. An ABC investigation recently revealed that home and contents insurance policies may be void where a person is conducting business at home, following a house fire insurance claim that was denied because the family occasionally sold eggs at their front gate.

A great number of artists produce artwork in their bedrooms, at the dining table or in their backyards. As some of the lowest-paid professionals in Australia, many artists cannot afford business insurance as well as an offsite studio to produce their work. The impacts of recent floods, as well as the ongoing pandemic, have meant that more artists have had no choice but to close their studios and set up their practice at home.

Another La Niña is currently underway – and continued heavy rainfall is likely to flood or damage a number of artists' studios. With the recent cancellation of home insurance policies for artists producing work at home, this is a big concern.

When anyone takes out a home and contents policy they are asked if any business activity takes place at the home. It is understandable that an artist may overlook this question and its significance since the making of art is so inconsistently recognised as a vocation. Yet it is now clear that an artist not disclosing that they are making artwork at home could risk voiding an insurance policy, which could leave artists without cover in the event of disaster.

Furthermore, there is little consensus on what insurance providers classify as “high”- or “low”-risk business activity. Some providers will cover homes that run a business from the premises, however that varies depending on the home scenario and the type of business activities done at the home. Typical questions an artist may be asked include the size of the workspace in the home, annual income from the artwork, type of equipment and materials used, and how many people might visit, including curators, buyers, or general audiences as part of open studio event during an art trail for example. While NRMA and Youi will, in most some cases, provide home and contents insurance to artists with home studios, many providers are either rejecting applications or inflating insurance premiums by thousands of dollars to also include Public Liability and other business coverage, not accepting that the artist may already have this type of insurance through Artsource, Craft ACT, Craft Victoria, Flying Arts, Guildhouse, or NAVA.

This issue is particularly frustrating for artists as it is another inconsistency in the way art is recognised, or not, as a real job. The Australian Tax Office (ATO) recognises artists through an income Taxation Ruling: Carrying on business as a professional artist (TR 2005/1), which allows income averaging to ensure that artists do not pay more tax over a number of years than taxpayers on comparable but steady incomes. Yet Centrelink, another area of government administration, does not currently recognise art as a profession. This means artists seeking income support are diverted into doing work that has no or little relevance to their career intentions. If artists do receive Centrelink benefits, they risk losing them when receiving an artist fee, materials or production fee, a grant or scholarship, or when winning an art prize.

In the absence of an industry award rate for the visual arts, NAVA developed an artists’ payment schedule as part of its Code of Practice, first released in 2001. NAVA continues to have primary responsibility for setting payment standards for visual arts, craft, and design practitioners, and has recently launched its sixth edition of the Code. Yet, the principles outlined in the Code, including fees and wages for visual artists and arts workers, continue to be voluntary, not mandatory. Governments and their funding bodies do not mandate these fees and therefore NAVA is unable to enforce the payment of adequate fees for artists and freelance arts workers.

The longitudinal studies by Professor David Throsby on the economic circumstances of arts practitioners over the last three decades indicate that the level of visual artists’ and craft practitioners’ incomes continues to drop significantly, and that a substantial proportion of practitioners are earning below the poverty line.

Following the February–March 2022 Lismore floods, Arts Northern Rivers visited studios, artists, and organisations and lobbied the state and federal arts ministers for awareness and funding support. They estimated a total damage of over $4.5 million in lost work, equipment, studios, and artworks to independent creatives.

In late September, the Greens responded to the government’s announcement of a national COVID-19 Live Performance Support Fund with the call for an extension to cover events cancelled by weather-related disasters. NAVA is deeply concerned about visual artists and craftspeople working without the protection of home and contents insurance and calls for the extension to go further. As climate change worsens, dangerous weather events are becoming more frequent and severe.

The Australian Government is currently developing a new National Cultural Policy which supports the artist as worker and celebrates their role as the creators of culture. In a context where art is consistently acknowledged as real work and artists are supported by regular public endorsement and a living wage that recognises the intrinsic, social, and economic value they provide, artists might expect to have business insurance or to pay a higher premium on their home studio insurance.

In the meantime, this sudden cancelling of insurance policies without an alternative solution exacerbates the already precarious working conditions that artists are facing. As such, NAVA strongly recommends that underwriters continue to provide home and contents insurance to those conducting small business from home. NAVA is in liaison with government to address this issue as a matter of urgency.