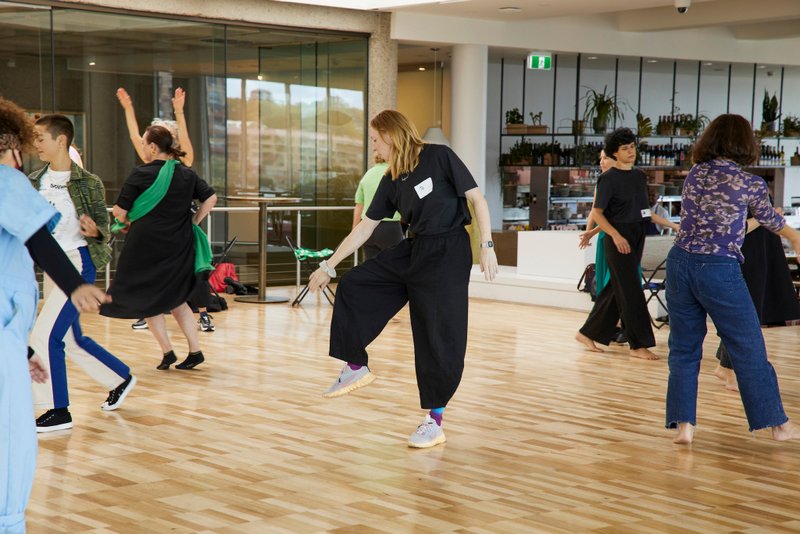 Image: Artist presentation by Jo Lloyd at the ‘Precarity and Practices of Care for Dance and the Museum’ event at the Art Gallery of NSW. Photograph: Mim Stirling, AGNSW

In the visual arts there are cycles in literature, discourse and practice. For a period of time in the early 2010’s, citing Chris Kraus was all the rage, then in the latter half of the decade, the writing of Mark Fischer had a big resurgence. In the last five or so years, anticolonial practice and strategies for unlearning have been widely influential for our sector, evolving both the practices of artists and curators and the ways that institutions conduct themselves.

More recently, the notion of care has permeated the arts, influencing how we approach our work and how we build and sustain relationships. I want to be clear that I am not being critical of this. I personally believe that care is integral to what we do in this industry and it is a cornerstone of my own practice. However, I am also acutely aware that in many instances, there is a chasm separating the espousing of care and its actual enactment.

As the director of Performance Review, a fledgling Naarm (Melbourne) based arts organisation that both presents performance practice and publishes critical writing on live art, I have been actively considering how this disconnect can be bridged. So, I found it particularly interesting to see this addressed in several of the presentations made at Precarity and Practices of Care for Dance and the Museum, a conference organised by the Precarious Movements research team.

Precarious Movements is conducting artist and creative practice-centred research to outline best practice standards for the commissioning, curating, conservation, presentation and interpretation of choreography in a gallery context and to improve critical understandings of dance and the institution.

On 30 and 31 March 2022, I was invited to join a group of Associate Researchers, made up of curators, conservators, artists and arts workers at AGNSW for Precarity and Practices of Care for Dance and the Museum.

NAVA is participating in Precarious Movements as part of its revision of the Code of Practice. At present, there are gaps in NAVA’s Code in terms of live performance in a visual arts context. These gaps include a discrepancy between what the Code outlines as an appropriate rate of pay for performers and what the Live Performance Award does and a lack of information on what should be considered best practice - both by performers and institutions - when presenting live art and dance.

NAVA acknowledges this deficit and is actively working to remedy it. I learned this through an interstitial conversation with Penelope Benton during the conference. We discussed some of the challenges that had come up for me whilst presenting performance in the gallery and this spurred her to ask me to reflect on Precarity and Practices of Care for Dance.

Over the course of the conference’s two days, we engaged with a series of presentations, movement workshops and panel discussions led by members of the Precarious Movements research team, guest speakers, AGNSW staff and artists including: Angela Goh, Brooke Stamp, Jo Lloyd, Latai Taumoepeau and Sarah Rodigari.

Philip Bither, Senior Curator of Performing Arts at the Walker Arts Centre, Minneapolis, advocated for increased literacy around the history of performance and dance amongst arts professionals and spoke of his ongoing professional relationships with artists, supporting their practices over several years and multiple projects.

AGNSW’s Conservator of Aboriginal and Torres Strait Islander Art, Juanita Kelly-Mundine, spoke about cultural care and transmission, centring First Nations ways of being and doing and framing care as something that is realised via respect, acknowledgement and support. Kelly-Mundine spoke of the ways culture is sustained and passed on in a First Nations context – through doing – and suggested a similar approach be taken to the conservation of choreographic practice. She also advocated for a shift in how we discuss performance in an institutional context. Rather than using language like “precarious” that is grounded in deficit thinking, she suggested we approach the issues raised by performance in the gallery in a more optimistic, solutions focused way.

Artist Latai Taumoepeau talked with Paschal Daantos Berry, Head of Learning and Participation at AGNSW about her and Brian Fuata’s exhibition Monumental (Working Title) in early April at AGNSW. Tied to the gallery’s 150th anniversary, Monumental (Working Title) was a radical curatorial proposition in which performers were asked to participate in a two-day performance exhibition, occupying various spaces within the gallery and responding to its context and form. Monumental (Working Title) centres performance, the live body and the lineages of this practice. Taumoepeau and Fuata’s curatorial approach employed an Indigenised practice that blurred the colleague/family boundary and invited artists and histories usually excluded from institutions like AGNSW into the gallery.