We chat to Clare Cooper who has created a monthly arts futuring program at the University of Technology, Sydney where she is currently lecturing in Interdisciplinary Design Studies, Design Thinking and Researching Design History. 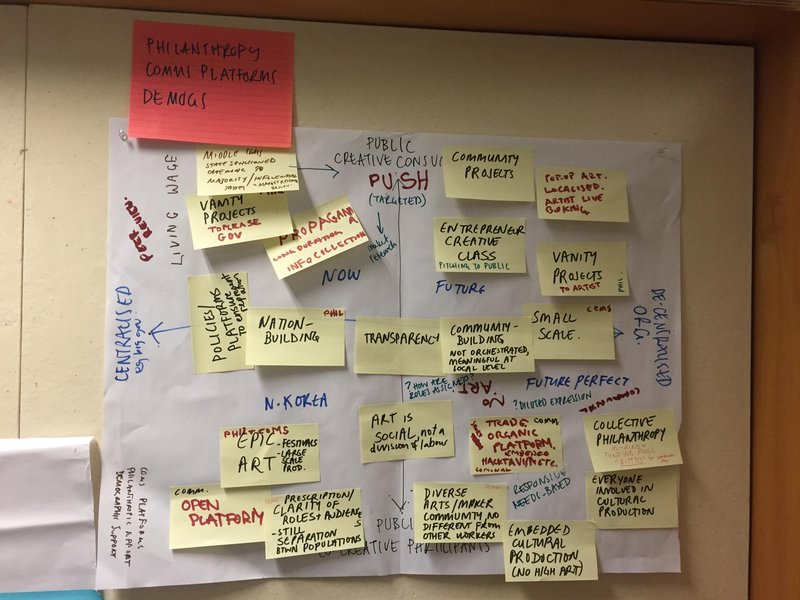 1. Briefly what is the scope of your Arts Futuring Program?

I began hosting monthly arts futuring sessions back in June this year with the idea that it would be an evolving, fluid project. It facilitates and provokes spasmodic and long-term constructively critical conversations around creative survival for the arts sector as well as the arts embracing its vital role in broader solutions of creative collaboration in Australia. We’re meeting monthly at UTS to flesh out possible, probable and preferred futures for the arts. We're approaching these sessions without assumptions that any of the support structures to date are sustainable or beneficial in the short or long term. We’re looking at a variety of social, technological, environmental, economic, creative and political hurdles. The outcomes of these meetings could take the form of performances, festivals, simulations and pseudo-campaigns that highlight the possible hurdles and boons of/with/for the arts community before we reach them.

2. Who are the invited participants & why are they chosen?

3. What was the catalyst for you devising the program?

It is only in part inspired by the previous Art Minister George Brandis' knee-capping of the national arts sector. Performing in Europe from 2001 and living in Berlin between 2007-2013, I witnessed many a healthy artist, arts festival, ensemble and institution crumble and be crippled by cuts to arts funding and/or their lack of agility in shifting engagement with their audiences. Many of these organisations suffered in silence and did not engage their public in searching for solutions. Many presented themselves as shiny, strong arts forums right up until the day they had to close their doors.

Finding my feet again back in Sydney I begin sketching the design of a festival that would simulate a variety of arts festival contexts 30 years from now. This was done in the hope of shaking up some of the elements we are limited by and perhaps take for granted now such as access, representation, ticketing, corporate sway, energy and surveillance. I think these social questions are a seriously fertile context for interesting composition.

4. What do you see as the threats and opportunities in the current arts environment?

The sector is willing to collaborate, to reach out to one another and to take some risks - we’ve had a taste of that over the past few months.

Hearing artists employed under contracts and working as teachers, broadcasters, and writers, express concern that their boards or employers do not allow them to engage in political discourse is alarming, as is the manner in which the gagging of arts companies after the Brandis cuts was quickly swept under the rug.

The ‘business as usual’ facade of the arts sector is dangerous. Many of my overworked, and underpaid colleagues have told me that they don’t have time to spend thinking about the future as they’ve got to focus on ‘today’ and ‘rent next week’. They can’t engage their audience in conversation about their halved budgets, overtime, unemployment, anxiety or chronic fatigue as its seen as unprofessional and/or might turn punters away.

It’s not that I don’t appreciate that people are struggling. I’m a single parent, student and freelancer. My immediate future is incredibly uncertain, but I'm certain we have to spend more time on prevention rather than a cure here, and it’s empowering to flesh out and try on these futures. Our non-cash assets are extraordinary and, when shared, we are ridiculously equipped to envisage and carve out a more positive path than the crumb scrambling one we seem to be on now.

5. Can you give an example of one of the ‘quadrant mapping' exercises?

This process is based on the futuring methods of Sohail Inayatulla using quadrant mapping which is a fantastic way to make projected futures physical enough to begin to digest as a group. It’s tricky to summarise verbally but I’ll give it a go..
The most recent quadrant was built around two axes with the main variables being: whether society views themselves as arts consumers VS a society that views themselves as active participants in the arts, and whether governance (local through to federal) is centralised VS decentralised Coming together, the groups identified which ‘moments’ are preferred outcomes and which are most likely. The next couple of sessions will attempt to pick apart some of the more interesting tensions between probable and preferred futures and how to backcast from the preferable trajectory over the next 15-20 years.

6.What do you hope will come out of doing this?

Practical and positive steps toward a more resilient arts community. I hope to see more solidarity across the sector with those that are alienated from the support systems (even before the Brandis cuts!). It might get worse before it gets better, especially if we are forging new paths. Eventually I hope the national attitude towards artists and the arts shifts to one that recognises and celebrates it’s guts.

At any one time Clare Cooper is designer, musician, producer, event manager, art director, illustrator, teacher, student and Mum. She completed a Master of Fine Arts (Sound) from the University of NSW College of Fine Arts, in 2009 and is currently undertaking Ph.D research at Macquarie University, Sydney. She has worked in sound, film, print, dance and theatre and has presented solo and collaborative works in 14 countries over the past 15 years. Her sonic works have been featured on Australia's ABC, Germany's SWR and UK's BBC. She has been published by the Australian Music Centre, Mikroton (Russia), Splitrec (Australia) and High Zero (USA). gutstring.net