On the Prospect of Restoration of Arts Funding 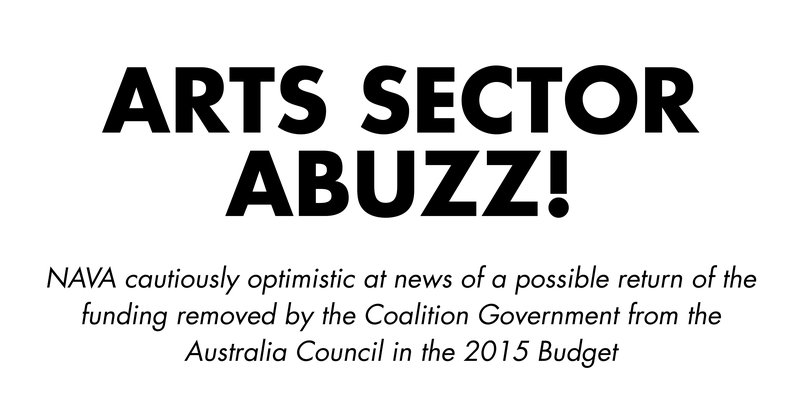 Responding to news of a possible return of the funding removed by the Coalition Government from the Australia Council in the 2015 Budget, the peak body for the Australian visual and media arts, craft and design sector, the National Association for the Visual Arts (NAVA) was cautiously optimistic.

Tamara Winikoff, Executive Director of NAVA said, “We wait to hear this confirmed but the arts sector is allowing itself a glimmer of hope that Minister Fifield will see the wisdom of returning arts funding to a sustainable level and allowing its arts funding body, the Australia Council to do the work it was set up to do.”

Winikoff continued, “After an exhausting eighteen months of protest, it would be a huge relief to all of us in the arts to have some prospect of repair of the damage being caused to small to medium arts organisations and independent artists.”

In the visual arts, almost half of the organisations that support the work of contemporary artists have lost their operational funding. Many of them have been looking desperately for alternatives in a very tight fiscal environment where private sector alternatives are increasingly elusive.

The lack of transparency in decision making by the Government’s Catalyst program and the duplication of administration with the Australia Council have been strongly criticised as sub-optimal.

Winikoff continued, “Shortly after his appointment in 2015, Minister Fifield admitted to a large national meeting of the arts sector in Melbourne that there was room for improvement and said he was keen to hear the views of the sector. The message from the sector was clear and unanimous. If Fifield acts on this message he will show himself to be a man of his word and will earn the gratitude of the sector.”

Following the outcomes of an extensive Senate Inquiry which attracted almost 3000 submissions, strong recommendations were made to restore the funding to the Australia Council back to at least 2013 levels and develop an arts policy. Although the Australia Greens and Labor agreed to follow this advice, the Coalition went to the last election without any such policy.

“Not unreasonably, the arts sector has been calling for some indication that the government is ready to take important positive decisions about Australia’s cultural future. Perhaps now is the time to honour the evidence and advice being offered by the arts community about what would genuinely make Australia a great arts nation,” Winikoff concluded.