What You Have Been Saying About Artists’ Fees

Tamara Winikoff reports on the outcomes of a series of consultation roundtables NAVA has been hosting this year on its Fair Pay for Artists campaign. 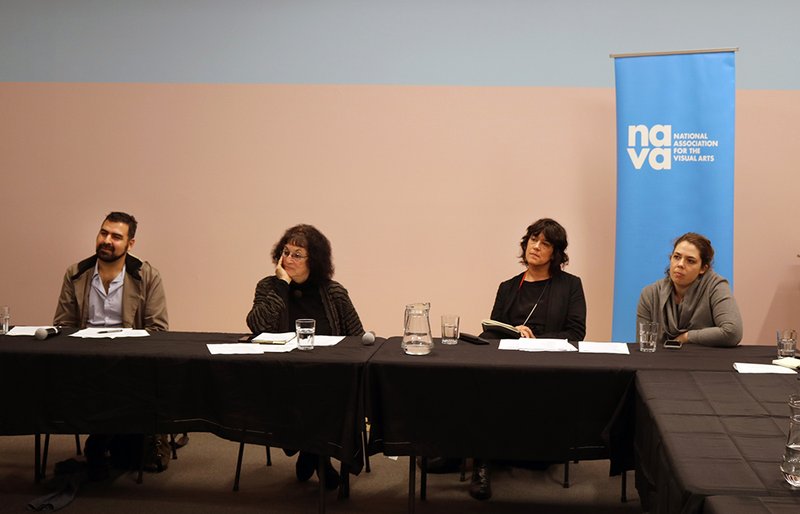 NAVA has begun to unpack the detail in its ‘Fair Pay for Artists’ campaign through holding a series of consultation roundtables across the country since March. Artists, curators, gallery staff, academics and a range of other arts professionals have been invited to tease out their ideas and experiences with their peers. Meetings have also been held with state and territory arts ministers, their advisers and heads of department. At every meeting there has been a refreshing spirit of collegiality and shared mission. There is unanimous agreement about the ethical principle of artists being paid for the work they do, above and beyond simply covering the costs of production and presentation of their work. The following are some of the complexities which NAVA is now working to resolve.

Fee Scales in the Code

Questions were asked about how NAVA’s fee scales were calculated and whether they are OK, too little or too high. The current scales are based on a fixed fee rather than an hourly rate as has been adopted as standard industry practice. But questions are being asked about how well this sits against hourly rates applied in the performing arts, particularly for multi-disciplinary spaces. One failing of a flat fee is that it doesn’t take into account additional time that may be required from the artist for interviews or meetings outside of the initial artist fee and production costs payment. This has inspired NAVA to go back to the work done by the University of Sydney’s Workplace Research Centre, a partner in the original project to establish NAVA’s Code of Practice.

One Size Fits All?

Questions were asked about whether different types of organisations need to be treated differently because of the huge variation in their modes of operation and budget levels. For example, should there be a graduated scale of fees according to a gallery’s budget? An alternative view was that artists shouldn’t have to compromise their standards because of the capacity of a gallery to pay. Instead some thought that to meet industry standards, galleries could choose to be doing less shows though this would mean cutting the number of opportunities for artists to show their work. The consensus was that any arts enterprise, whether not for profit or commercial, should not be asking artists to subsidise the cost of running their business. Further, there was strong support for artists’ fees to be written in as a fixed percentage of organisations’ annual budgets.

There was a negative reaction to the question, “should galleries be charging an entry fee for all exhibitions not just blockbusters?”. It was felt that it would be very difficult to change public expectation of free access and could seriously jeopardise audience attendance.

What would persuade galleries to commit to Fair Pay?

Carrot and stick approaches were considered and NAVA mentioned it was already working on an idea to reward galleries for doing the right thing by offering an ethical standards sticker if they measured up against four performance assessment criteria:

It was felt that state and major galleries should be taking the lead and setting an example to the rest of the sector.

NAVA has proposed that a new $5 million/year Artists’ Fees Fund should be established with a matched contribution between the federal and state/territory governments. It was agreed that this would be a valuable affirmative action measure to embed payment of artists fees as a universal standard across all levels of the industry. However, there was a lot of discussion about the detail of how it would work:

- who should be eligible to apply for funding?

- what criteria should be used for assessment?

- who would be responsible for managing the fund?

- should funds be allocated to each state and territory proportional to their contribution to the fund?

One difficulty is that the funds would be particularly helpful to ARIs and those regional galleries that are not properly supported by their local governments. However, the distinction between selling and non-selling shows in these spaces is becoming more blurry.

Another interesting question was, should a loan (copyright) fee be paid to the artist when they no longer own the work but it is loaned by its owner.

Other mechanisms that can help artists

Further related industrial issues were raised as worthy of attention including the need for:

In continuing the campaign, NAVA will be working to find satisfactory answers to the matters raised. We will continue in close consultation with our members and colleagues across the sector and the key decision makers whose support is essential for this to succeed. Thanks to everyone who has generously participated in the process thus far. Your contribution has been invaluable. Now, if you haven’t done so already, please sign NAVA’s petition and activate your networks to join in https://www.change.org/p/support-fairpayforartists .

What You Have Been Saying About Artists’ Fees