We spoke to Jeanie Scott, Executive Director of UK-based organisation a-n about their Paying Artists campaign for UK artists and their thoughts on artist fee models in Sweden and elsewhere. 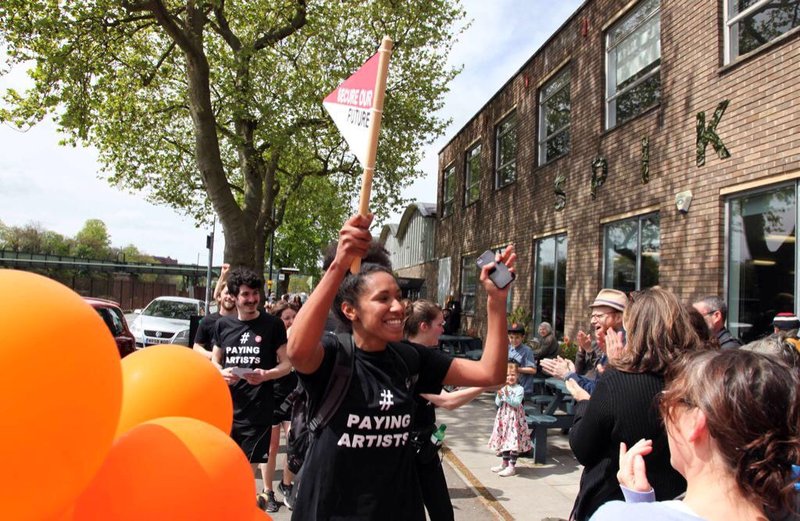 It’s been more than two years since a-n launched the Paying Artists Campaign to secure payment for artists who exhibit in publicly-funded galleries. What were the most important elements of the campaign?

One of the first things to highlight is that the campaign was devised by our members through our advisory AIR Council, so the campaign had artists at the heart of it since the beginning. (AIR Council is an advisory group to a-n with artists appointed to it by their peers and representing a broad cross-section of our membership.)
We knew from anecdotal evidence that artists were not being paid for exhibiting in publicly funded galleries, but we wanted to back that up with unequivocal evidence and as far as possible, a collegiate approach that brought the whole visual arts sector along with us. We launched the campaign with an initial report based upon the findings from a survey of our membership and then set about consulting widely with galleries, museums, curators, funders and artists, plus other support organisations.
At times this approach was frustrating for our artists, taking over 3 ½ years from the initial survey that led up to the launch of the campaign itself through to publishing the final report and recommendations.

You found 71% of artists were not receiving payment for exhibiting in publicly funded galleries. Have the campaign and the development and distribution of your Exhibition Payment Guide made an impact?

It's too early to say what impact the publication of the guidelines has had as they were only launched in October 2016. The main point to note is that the framework has been written into the guidance on artist payments from the public funding bodies in England, Wales and Scotland and we are working with them to assist implementation. We’re also launching a Paying Artists Working Group this year comprised of sector support organisations with particular expertise (e.g. festivals, touring, performance, participatory practice, museums etc) to refine the guidance further and support its implementation through their networks over the next 5 years. We’ll monitor the situation through surveys between now and 2022 and to report back at the end of that time with any amendments to the guidance and fee framework based upon how they work in practice.

Your campaign involved a lot of consultation with over 2,000 individual artists and organisations. How did you get them on board with your campaign? In particular, how were you able to alleviate the concerns of the exhibition spaces if they said that they couldn’t afford to pay, especially artist run initiatives?

Listening, talking, listening and doing it all again… People were keen to have frank, open discussions about all the potential impacts the guidelines might have on organisations that could not afford to pay and we made space and time for that to happen. We did that quite early on and quickly got to a place where everyone agreed fair payment was a good thing – and it just became a question of ‘how’ to make it happen, considering all the constraints. We also realised early on that artist-led groups needed to a different category of guidance from established galleries or institutions. While they often share the same scale and ambition – they don’t have the same resources. There was a desire from artist-led groups to make sure that the ability to self-organise and accept exhibitions without payment (particularly early in their career) was important – to have that free will. So we established a best practice Artists Led Manifesto – drawn from the main guidance. Put simply, if public money is being applied for and gained to make an exhibition for public presentation – appropriate artists payments should have been included in the budget and the exhibiting artists should be paid. If there’s no money in the pot and no-one is getting paid, artists can choose how they do, or don’t engage.

What role have the UK funding authorities played and what is their attitude to mandating payment by their grant recipients?

The various funding authorities have had a crucial role to play as the campaign focus was always on exhibitions funded through the public purse. We have a level of complexity here in the UK with four countries, three with devolved cultural budgets, four cultural policy agencies and many different regional councils. Although there are administrative, policy and economic differences across the countries, all of the agencies were committed to improving payments to artists. a-n hosted a series of roundtables with all four arts councils to share approaches, and explore how we could, collaboratively, get as much impact as possible. In the end, they have made it an expectation in their guidance and will work with us to assist implementation.

Do you think the Swedish MU Framework and Standard Agreements between national visual art organisations and the Swedish State are a good model for use elsewhere?

KRO/KIF, the authors of the MU agreement, have been incredibly supportive with our campaign; we also looked at a number of other approaches including those from CARFAC in Canada and W.A.G.E in the United States. The MU works because of the way the Swedish system works with a small network of publicly operated galleries run directly by the state. Whilst aspects of this are translatable to different cultural contexts, a certain amount of adaption is always going to be necessary.

No matter what approach you take, changing attitudes to artist payment is always about longer-term change and digging in for the duration. It's an expensive and often difficult process, but systemic change doesn't happen overnight. Not paying artists had become so established that it will take years of continued effort to keep challenging a preconceived notion that artists do what they do for the love of it and don’t need to be paid.

NAVA is re-launching an Australian version of the artist fees campaign. What advice would you have for us?

My main advice would be to conduct extensive research before you start to lobby. The shocking facts about artists livelihoods are what have finally convinced government representatives, policy makers and exhibiting organisations to support us in the face of shrinking budgets and increased expectations for value for money.

I don't think we can measure success yet as the exhibition payment guidance needs to bed in and, when we know how well attitudes and practice is changes, we’ll feel that the job is done. I don’t expect that to be overnight. We are fighting for fair pay for artists for the current generation, but that fight may have to be fought again in the coming years using a different narrative. The speed with which current politics and policy changes means we will always need to be vigilant!