NAVA consulted with a number of lawyers and superannuation experts to resolve the grey areas of when superannuation contributions should be paid for artists working in galleries or other arts organisations in various capacities. 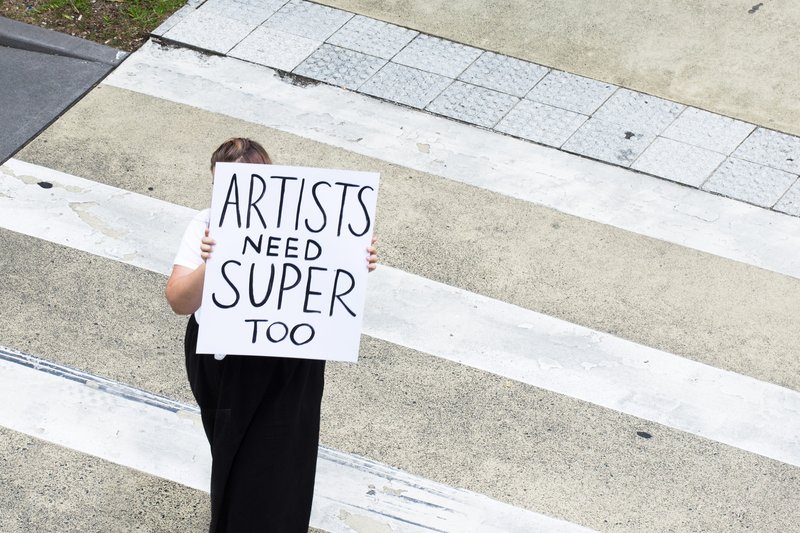 One of the major concerns that keeps coming up in conversation among my network of artists and art installer friends and colleagues is inconsistency and the ongoing impact of having little to no superannuation. Some galleries make super contributions for artists and art installers, some pay for some of their installers only, some don’t make contributions for either. Apart from needing to save for retirement like all other working people, superannuation is considered by the banks as part of your assets when you’re applying for a credit card, a personal loan, or even a home loan, so the impact of having little or no superannuation is felt long before we even think about hanging up our studio clothes.

There is general confusion in the industry about superannuation for artists working in galleries or other arts organisations in various capacities. As part of our current Fair Pay for Artists campaign, NAVA consulted with a number of lawyers and superannuation experts to resolve the grey areas, finding that there are some instances when the concept of an ‘employee’ for superannuation purposes, is legally extended to include the work of visual artists, sole traders and contractors.

We’ll deal with the clear distinctions first. Some galleries and arts organisations may not be aware that some contractors are employees for superannuation purposes and the employer may be required to make superannuation contributions on their behalf. Generally, a contractor will be an employee if the contract is wholly or principally for the labour of the person. NAVA has produced a free factsheet under the advice of Arts Law that explains in detail, what determines whether a person is an employee or a contractor for superannuation purposes.

For visual artists presenting an exhibition, the question of super contributions on the artist fee they receive for the commissioning or loan of their work is not so clear. Although the above factsheet summarises the instances of when an artist will be deemed an employee for superannuation purposes, we have further unpacked the detail below based on the advice we received.

Section 12(8)(a) of the Superannuation Guarantee (Administration) Act 1992 (Cth), extends the concept of employee to include:

“a person who is paid to perform or present, or to participate in the performance or presentation of, any music, play, dance, entertainment, sport, display or promotional activity or any similar activity involving the exercise of intellectual, artistic, musical, physical or other personal skills”.

In paragraph 84 of SGR 2005/1 it is ruled that a painter does not perform or present an exhibition. However visual artists are likely to be included within the meaning of section 12(8)(a) in limited circumstances. For instance, a visual artist who actively participates in a performance or a presentation (eg. by giving a live exhibition of their artistic skill) would potentially be an employee for superannuation purposes under this provision. Additionally, a visual artist engaged in the preparation of materials used in a performance or a presentation could also potentially count as an employee under section 12(8)(b) (eg. a visual artist preparing the sets for a theatrical performance would be in the same legal relation to that performance as a playwright producing a script - see paragraph 87 of SGR 2005/1).

As mentioned, the ATO has given a ruling that a painter does not “perform or present” an exhibition. The same is probably true of most exhibitions. However, performance artists may well be in a different position. If a performance artist is someone who uses their artistic skill in a live setting before an audience, then their performance would fall within the operation of section 12(8)(a), meaning they would be considered as employees for the purposes of the Act.

Similarly some media artists will also be deemed employees for superannuation purposes. Section 12(8)(c) is engaged where a person is artistically or otherwise involved in the creation of three forms of physical media (film, tape or disk) that record a performance or in the broadcasting of a performance across two forms of communication (television and radio). A video artist who was paid to make a film would also likely come within section 12(8)(c) even if their work was only displayed in a gallery and not broadcast to the public because they were paid to perform services in, or in connection with, the making of a film.

Many kinds of visual artists (those involved in, for instance, producing ceramics, drawing, painting, sculpture, printmaking, design, crafts, photography, etc) would not ordinarily come within section 12(8)(c) unless they are recorded working in their studio or similar, as this would be considered a live performance of their artistic skill.

Beyond these examples, NAVA supports the principle of industrial fairness and the making of super contributions for artists.

In order to assist with ease of processing, NAVA has produced a guide for artists filling in a Super Choice Form which can be found here.

Under the law, the employer must pay an amount equal to 9.5% (as at 2017) of the earnings into the employee’s or ‘deemed employee’s’ super fund account. In the cases where paying superannuation is not legislated as outlined above, a gallery or arts organisation may make super contributions for their artists under the principle of industrial fairness. Contributions can be made direct to the artists’ super fund in the same way that super contributions are made for all employees, or alternatively they may ask the artist to add a super contribution allocation to their invoice and the artist may deposit this to their fund as a voluntary contribution. It is important to note that the 9.5% is an addition to the agreed fee or payment, rather than a deduction. Please see NAVA’s Code of Practice for recommended fees and wages for artists and art professionals.

Visual artists do not have to pay superannuation for themselves, but they can choose to make voluntary contributions to their own super fund account if they wish to do so. It’s important to do your research when choosing a super fund to consider how the fees and charges will affect your superannuation. There are several guides on Money Smart to explain how to select the right super fund for you, how to find and consolidate lost super from past employment, and what sort of entitlements you may be eligible for as a low income earner including extra government co-contributions.

It is recommended that you consider getting your own independent advice about your rights and obligations to superannuation.

Not sure what to write on your Super Choice Form? This guide tells you where to get the information you need and which sections to fill in.

This guide explains what might determine whether a person is an employee or a contractor for superannuation purposes.