An update from NAVA two months after releasing our open letter: ‘Dear Person I’ve Been Reluctant To Keep Engaging With But Have Had To For Professional Reasons’. 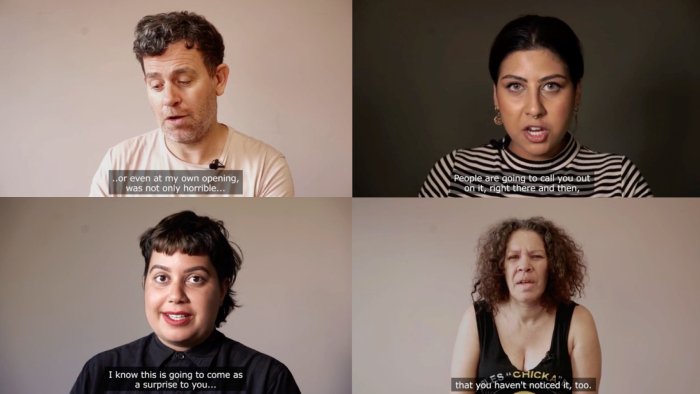 The response to ‘Dear Person I’ve Been Reluctant To Keep Engaging With But Have Had To For Professional Reasons’ has been tremendous.

In sharing ‘Dear Person’, we’ve also offered a set of resources – from specialist police services to support services – so that guidance and help were just a click or a phone call away.

Most importantly, we’ve committed to facilitating sustained cultural change in the arts. Only sector-wide commitment to sector-wide change can ensure that people in positions of power can be vigilant against misuse of that power.
At the same time, an awareness of the risks of speaking out is an important feature of the cultural change that is already taking place. Reporting gendered harassment and sexual assault involves a fear of personal or career consequences. Institutions must recognise the risks that are borne by those who speak out; beyond simply being aware of the risk, institutions must themselves accept the risk.
In coming months, NAVA will be working with sector organisations and legal experts to develop a whistleblower protocol for the anonymous reports of gendered harassment and sexual assault that we and other institutions are receiving at an increasing rate. We’ll also look at any other protocols that need to be developed and added to the Code of Practice.
We’re going to work as fast as we can – but we’re going to work hard to get this right. This means it will take some time.
In the meantime, we’ve put together a list of reflective questions that we hope will be useful for boards or sector leaders who receive an anonymous complaint about a third party:

Any movement to improve the ethics of the industry should be conducted ethically. To do otherwise risks impairing the moral authority of any campaign. A full protocol should be developed for the industry, which is part of a larger conversation. NAVA will continue to lead that conversation.

NAVA is committed to encouraging and celebrating artistic courage. We as a sector cannot ask potentially vulnerable artists and arts administrators to be courageous about these matters without committing wholeheartedly to a culture in which they are supported, respected and protected in doing so.